Today I wanted to share with you some of my favorite eats from the week! It actually turned out to be a nice mix of homemade and eating out.

Last weekend, we made the glowing spiced lentil soup from Oh She Glows, and paired it with some naan and baked potato wedges. We ate it while watching Bad Moms Christmas.

I had seen Bad Moms (when I was on the plane to South Africa, actually!) and really enjoyed it so I had high hopes for Bad Moms Christmas.

Sadly, this one didn’t quite live up to the expectations. It was still a cozy, fun Friday night though! 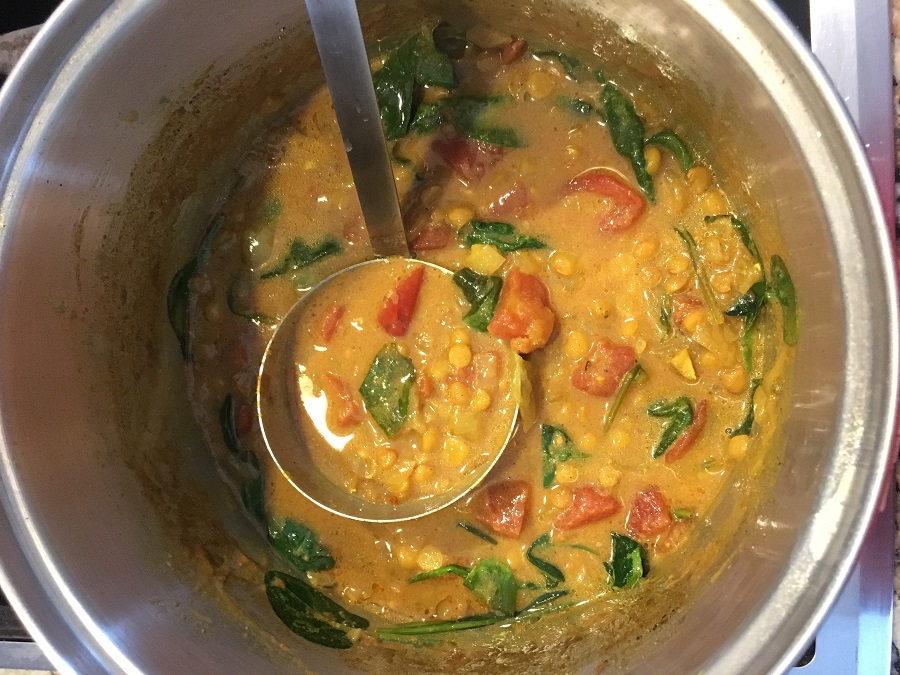 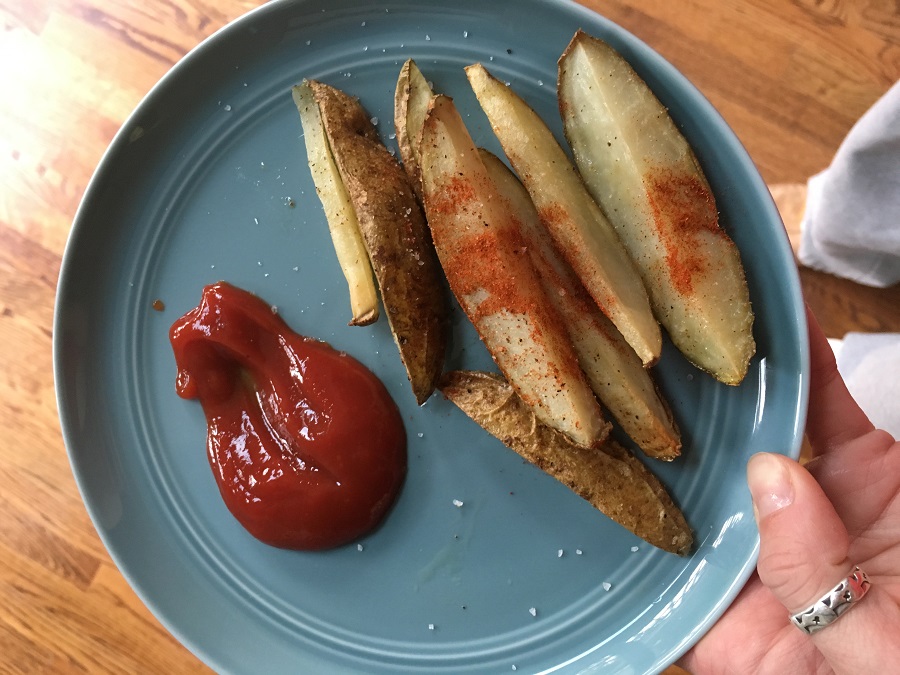 Obviously, needed my weekly donut fix! Last weekend, Ed and I made a stop into Babies ‘R Us since they were having their closing markdown sales. Sidenote – how sad is this?

I remember always looking forward to going to Toys ‘R Us growing up. We got a few things, and then stopped for donuts after at a new-to-me place in Concord called OMG Donuts.

What makes them fun is that they infuse cream into their flavors – chocolate, bavarian, vanilla or strawberry.

So, you’re biting into a fresh cream-filled donuts.

They said the Apple Fritter was their most popular so we ate that first – delicious.

I still don’t crave oatmeal in the mornings (I hope those days aren’t gone forever because that was my pre-run go to), but have been loving up on toast and bagels.

And Ed offered to make me a restaurant-worthy breakfast sandwich once morning that I’ve been recreating all week. 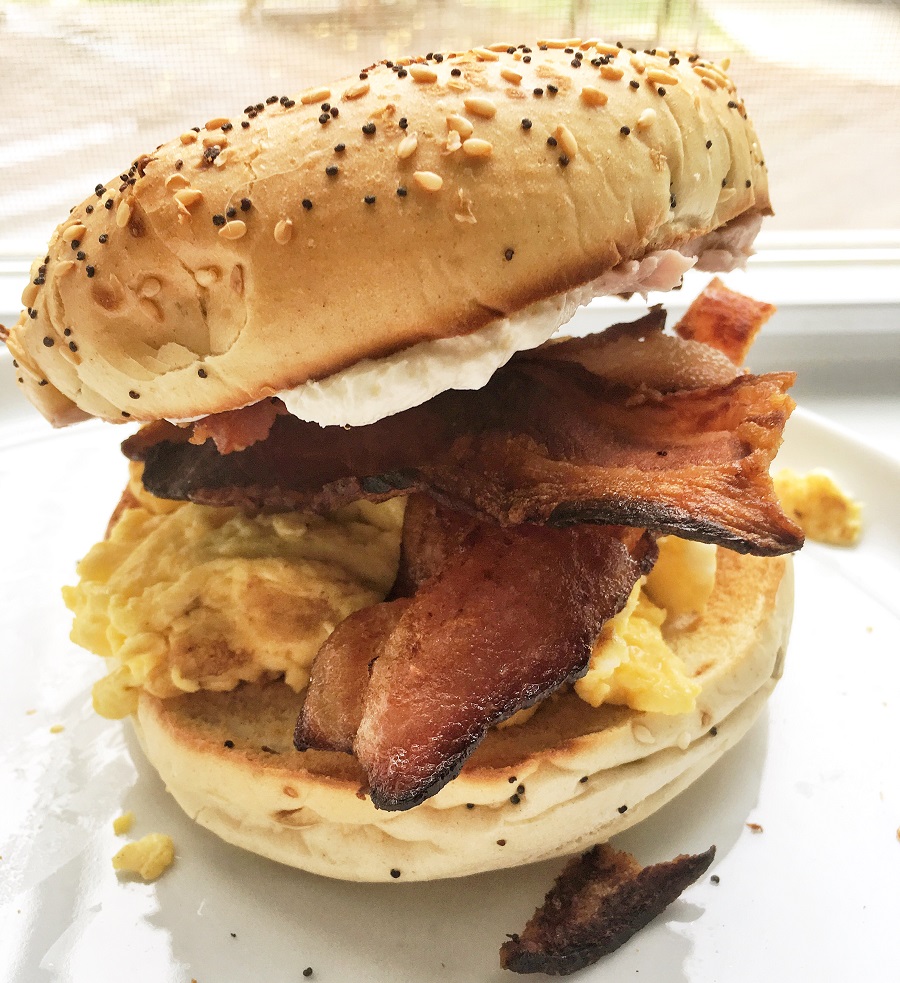 One homemade, one frozen. For the homemade, I used whole wheat dough and added onions, green peppers, mushrooms, spinach and topped it with roasted chickpeas.

I just wash and dry them, and coat them with spices (usually garlic powder, cumin, paprika) and roast them in the oven at 400 for 35-45 minutes.

And then I snack on them all day long.

They actually weren’t weird at all on pizza. I’ll probably do this again! The frozen pizza was just your typical chicken bbq.

Ed and I always have at least one frozen pizza on hand for those nights when we just don’t wanna cook. 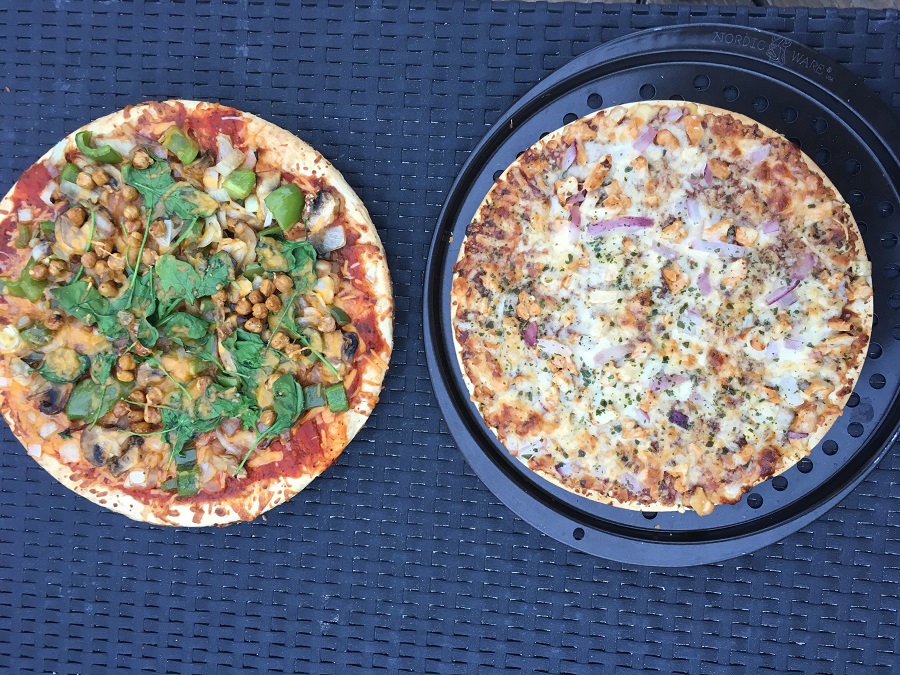 Ed usually eats one box on his own – it’s tough feeding a guy training for the Boston Marathon! I mixed in all the green things I could find.

This ended up being zucchini noodles (I’ve been loving zoodles lately), kale, broccoli and green peppers. I had a few bowls, followed by a Yasso Bar. 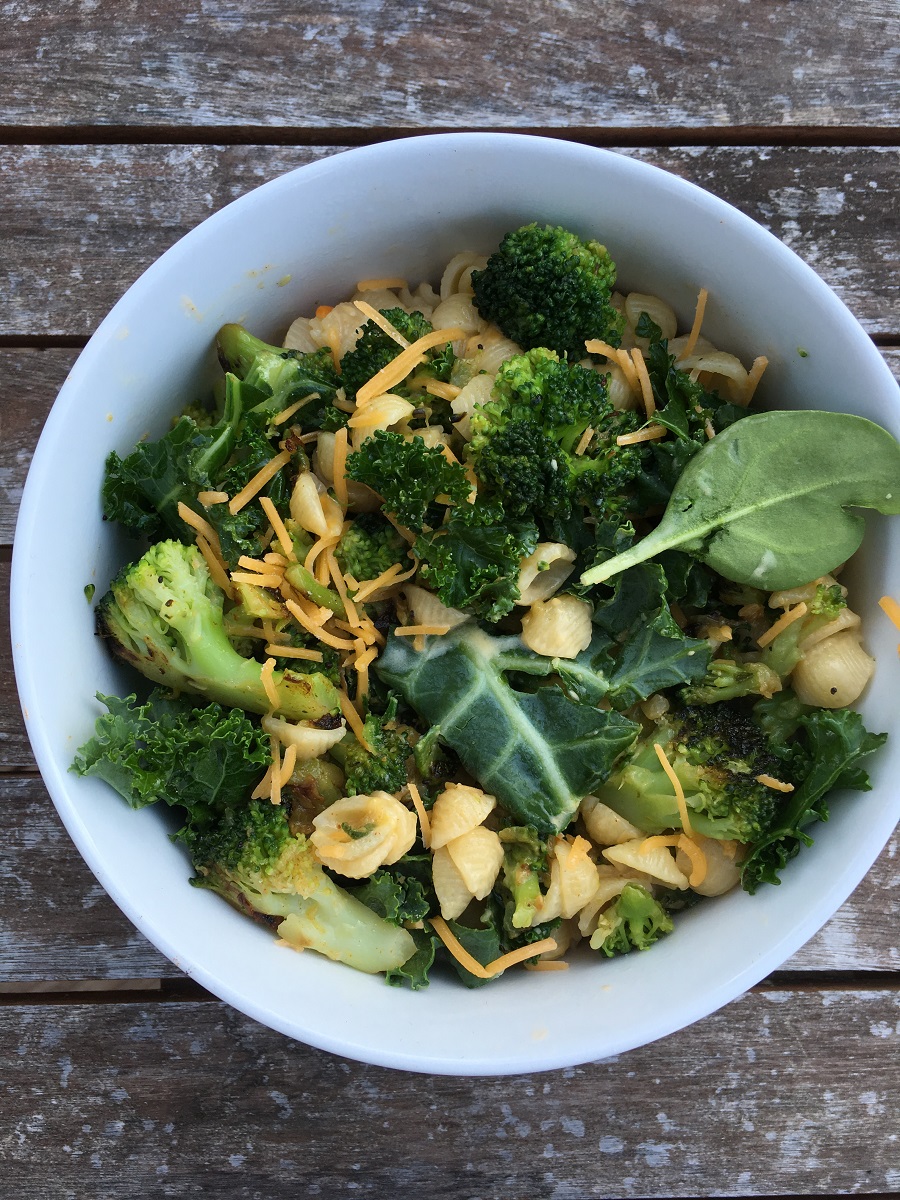 Note on the zoodles – I don’t think they are sufficient as a “carb” on their own.

For example, if you are using zoodles in place of pasta, I’d recommend doing half and half so you are getting some filling carbs.

Zucchini noodles are a vegetable, so they will not fill you up like the real pasta or carb would.

But, I still think they can be fun to include if you like them and have a spiralizer.

Ed and I went on a mid-week lunch date which was so so nice.

Something we neverrrr do, so I really treasured it. I wanted a burger and sweet potato fries.

Bad Daddy’s has some of my favorite SP fries in Charlotte, so we went there. I had a burger with fried mozzarella cheese which was delicious. 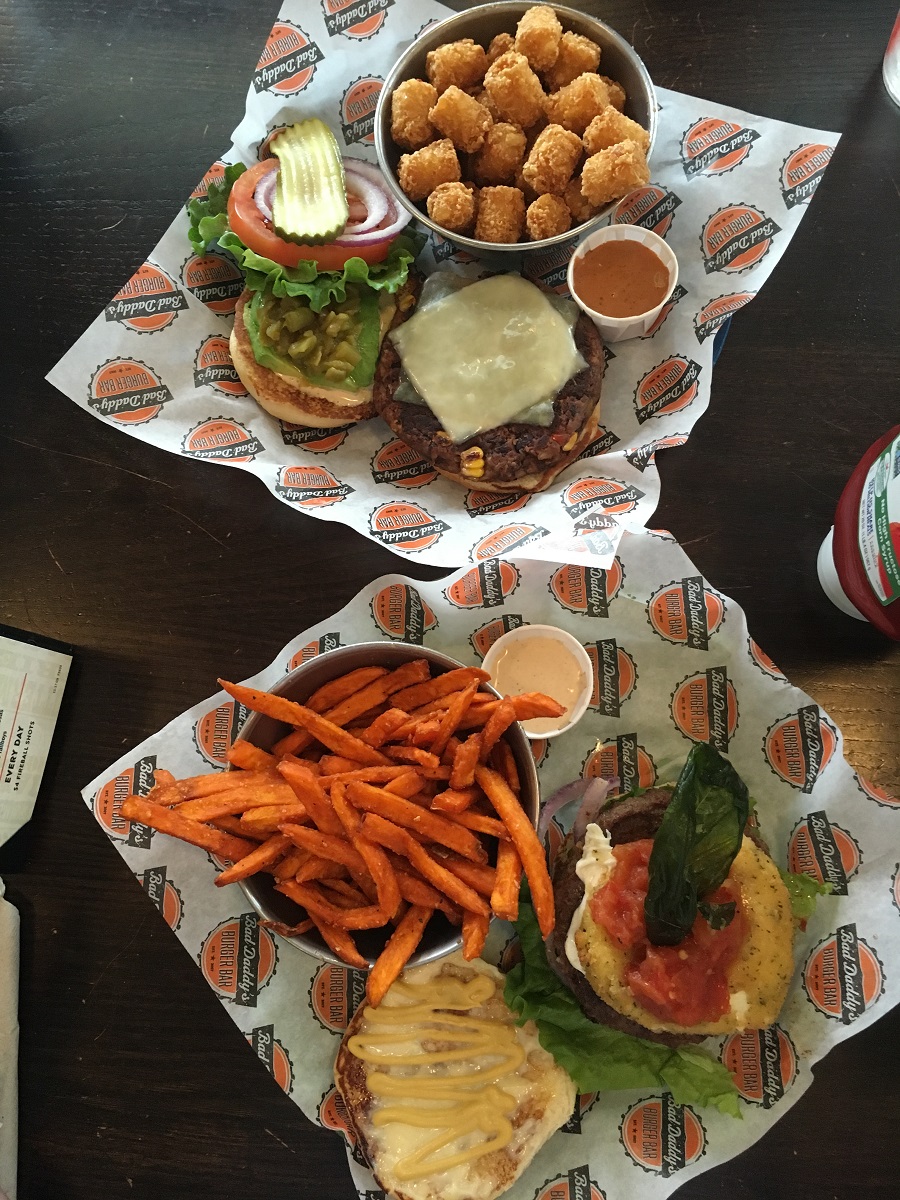 I love this recipe from Minimalist Baker. I would use it to season like anything. Or just eat it on its own.

I’ve had a block of tofu sitting in the fridge for a while so I used this recipe for a marinade! 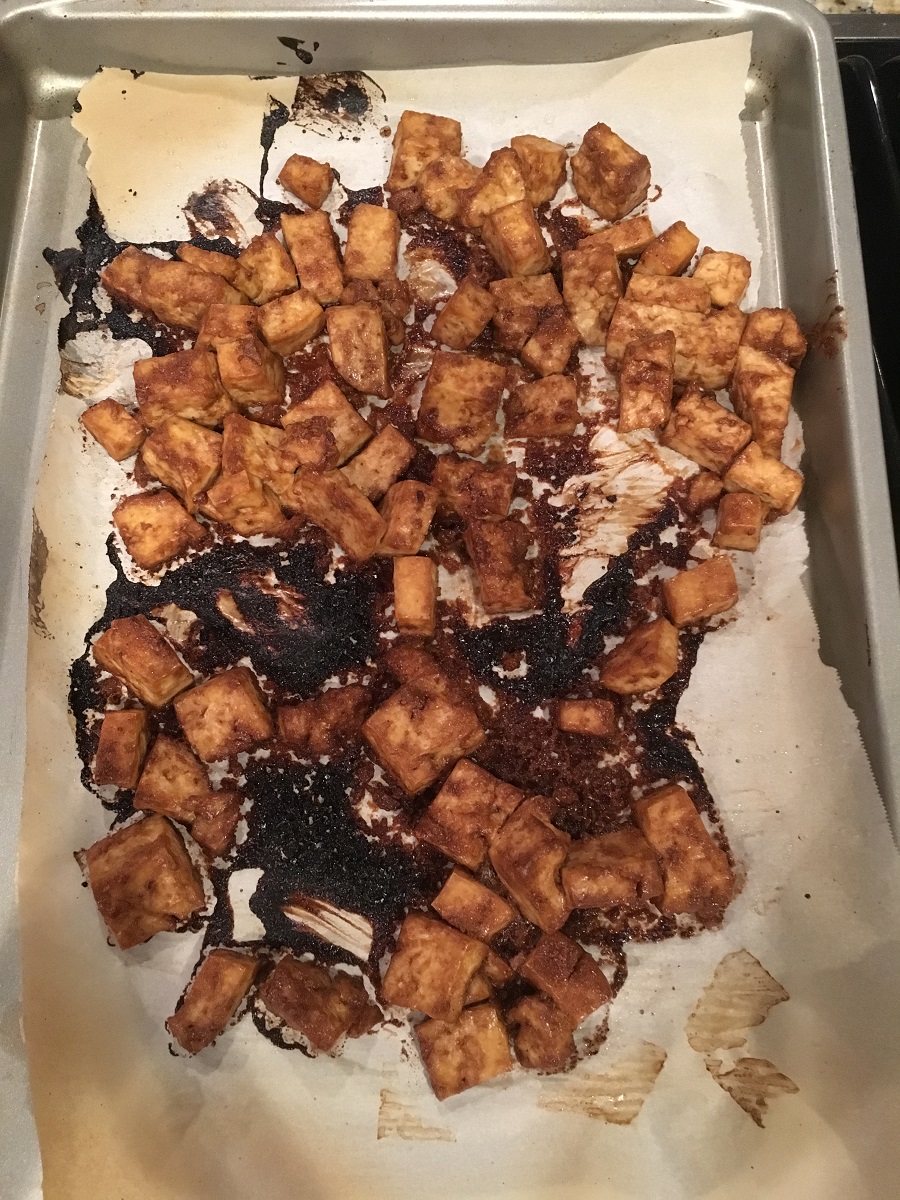 Hoping this weekend we pop this baby out!

What were your top eats from the week?

10 responses to “Favorite Meals from the Week”