Good morning friends! I hope you had a wonderful weekend with some good eats! I don’t have to much to report in terms of weekend adventures, so let’s go over some random thoughts!

To some extent, I enjoy lazy weekends and feel like it was necessary after last week’s travel. But, the other part of me gets a little antsy and feels like I should be taking Camryn out more. We made it to the playground and on a few walks/runs, but most of the time was pretty low key. 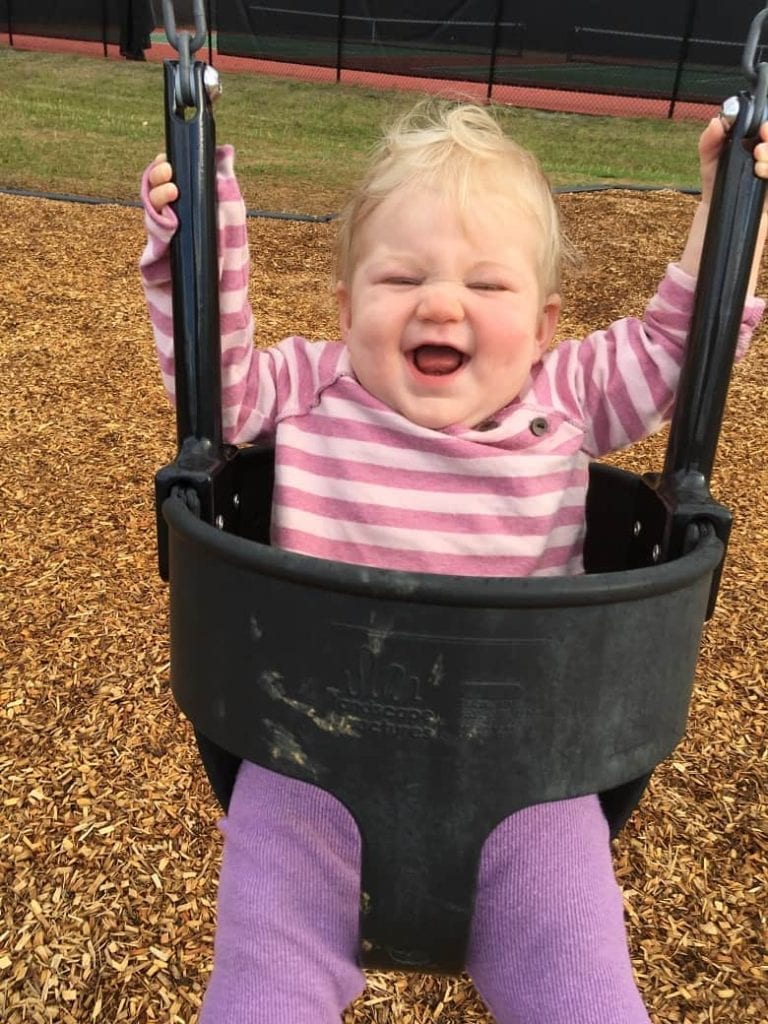 My brother and his girlfriend were in town for a wedding, so we spent some time hanging out with them too. It was beautiful Sunday so we enjoyed some donuts on the porch. 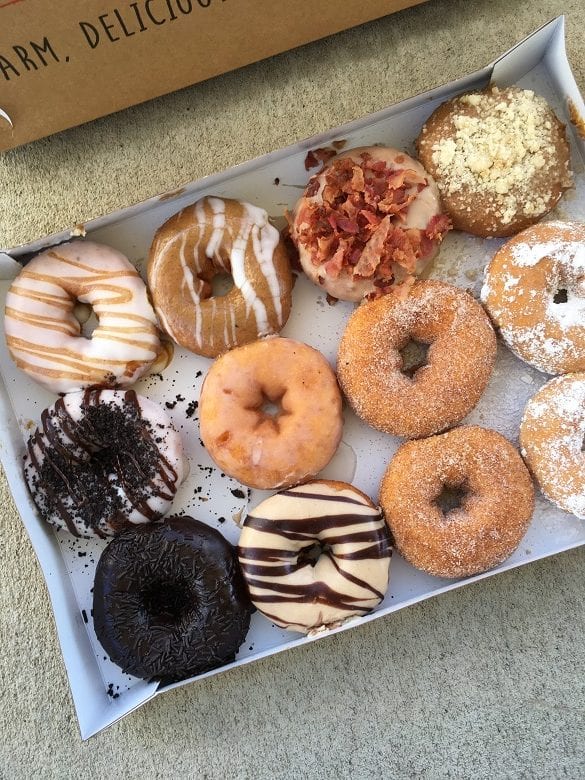 I just love this family photo from Cam’s 6 month shoot – captures our family perfectly. A distracted dog (probably looking at other dogs on the street), a curious baby, and an overenthusiastic mom. 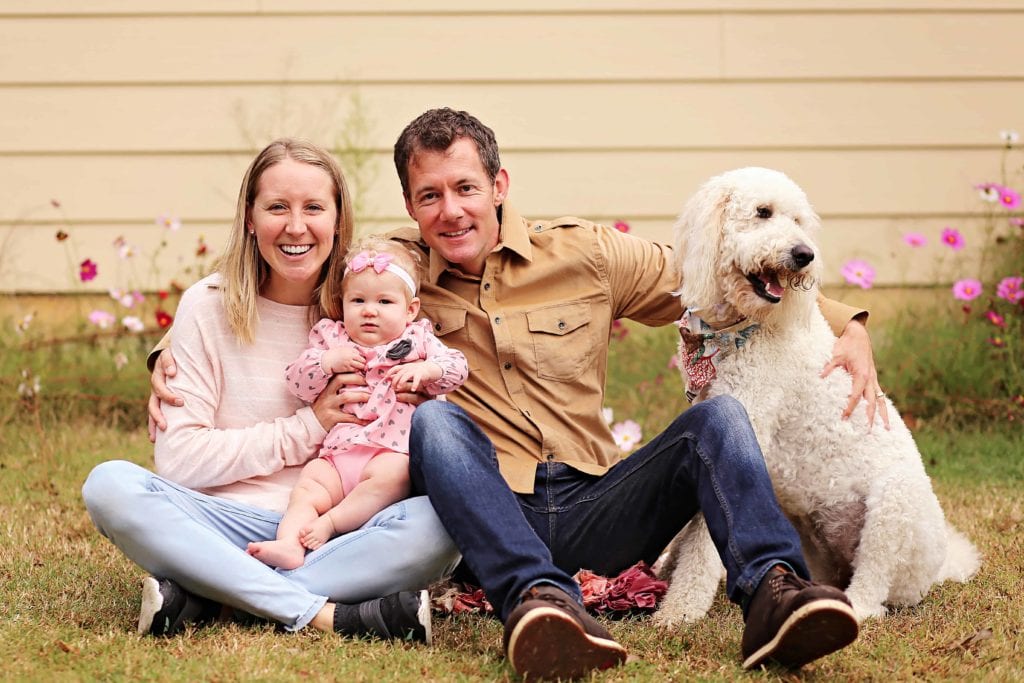 I definitely don’t feel as prepared for Saturday’s half as I have in the past. Part of that is pretty obvious – I just haven’t been running as much. But, the larger part of me is excited to get back out on a race course. And run with lots of other people. Pretty much all of my runs these days, with the exception of a few, have been solo or with Camryn. I’m really craving some comradery and running in a pack. My biggest goal at this point is to not get caught up in the race and competition, though. I have to run my own race and not get ambitious with pace or anything, because I haven’t worked on that. I’m not my fittest and I’m just doing this for fun!

I’m going to do a post after the race with more details about my training and balancing everything but for now, I’m just going to go with it.

Does anyone live in an area where Costco does “same day” delivery? Unfortunately, we don’t. But we do live in an area with two day delivery, and it’s free if you spend over $75, which is pretty easy for us. I just ordered a bunch of our pantry staples, tissues, tp, paper towels, etc. And their almond butter is my favorite, so I load up on them too. Other staples: maple syrup, peanut butter, crackers, baking cocoa, chocolate chips, dark chocolate, coffee, diapers and wipes!

I haven’t tried the Costco brand of diapers, but we’re having one too many blowouts with the current brand we’re using so maybe these will be better?

What’s your favorite? I love milky ways, swedish (definitely had to look up how to spell that lol) fish and sour patch kids. Oh, and reese’s pieces. I actually have lots of fond memories of Halloween growing up, and collecting candy in pillow cases or homemade “candy bags.” And my siblings and I would empty our bags at the end of the night and swap candy. Yeah, I probably ate too much on Halloween, but I learned what didn’t feel good. And I never obsessed about candy after that day.

Yes, dietitians eat and give kids candy! I know that some parents probably feel that people shouldn’t be giving candy to kids (and there are “healthier” options). Or, that candy should be “limited.” But, what goes for anything else with “rules” and “restriction” also goes with Halloween candy – you tell kids its off limits, what are they going to do? Probably eat more of it. Or hide it and binge on it. I know parents have good intentions by trying to convince kids to trade off their Halloween candy or stash it away. But, doing so can actually backfire because then kids aren’t allowed to self regulate and you’re telling them certain foods are “bad.” This is a great article by RD Abby Langer about why parents shouldn’t try to replace Halloween candy with other things, like fitness passes.

Instead, just don’t make a big deal out of it. Halloween is Halloween and it’s only one day a year. If you don’t give Halloween so much attention, kids will move on and forget about it soon after. I guess another part of the equation is that if kids are only “allowed” to have sweets on Halloween, or Easter, then it makes sense that they go a little crazy. Instead, show them that it’s okay to enjoy these foods in moderation throughout the year. I have some ideas for posts on this once we get to that stage with Camryn. But for more information, I highly recommend Ellyn Satter and the division of responsibility when feeding children.

So, that being said, here’s the candy we’re handing out this year. 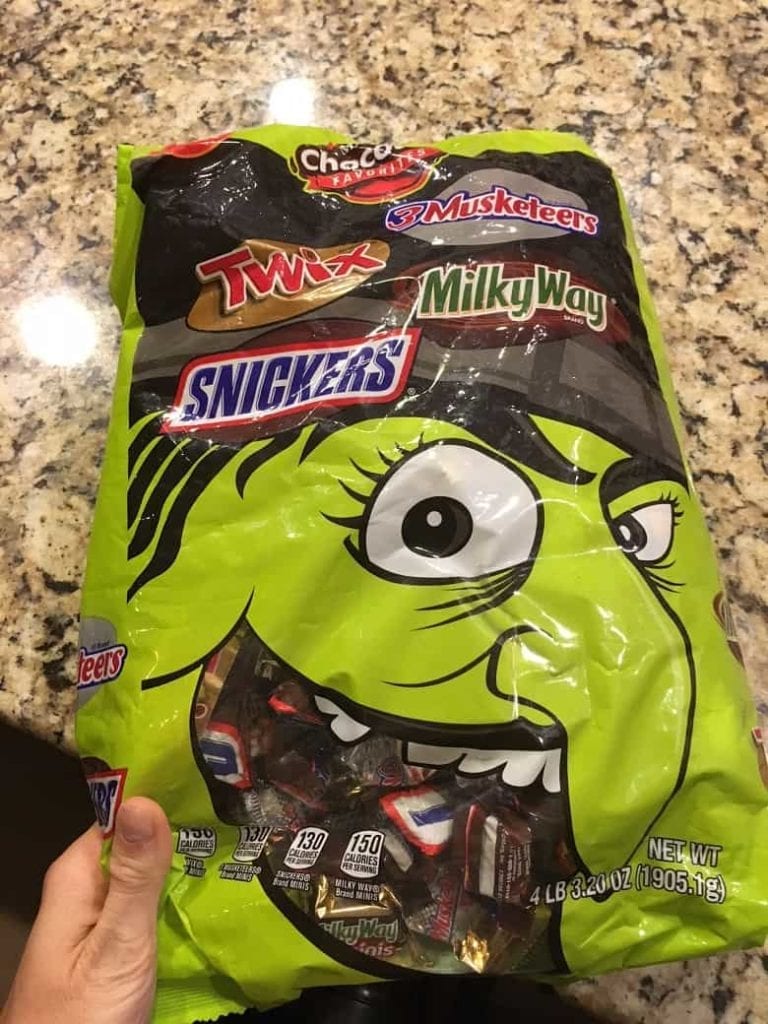 What do you have going on this week? Cam starts swim lessons tomorrow and I’m so excited!!

Do you like to do races for fun or as a competition?