The Asbury is a small, yet modern restaurant located in the bottom floor of the Dunhill hotel off of Tryon Street. It’s a small, intimate setting that culminates Southern ingredients, creativity, and hospitality. Many of the inventive dishes reflect executive chef Chris Coleman’s southern roots. As a diner, I would describe it as homestyle, comfort food at a 5-star quality.

I recently had the opportunity to go in and taste some items from their new spring menu, which was just released in mid April. That may sound like a late release for a spring menu, and it is. Chef Coleman confirmed that their menu cycle is typically a month behind on the seasons, largely because they create each seasonal menu based off of what local crops are available. So if the local tomatoes aren’t ready, they won’t be used on the menu. The summer menu probably won’t roll out until July.

I myself have a strong appreciation for sourcing local food, so I give them an abundance of credit for sticking to their roots. 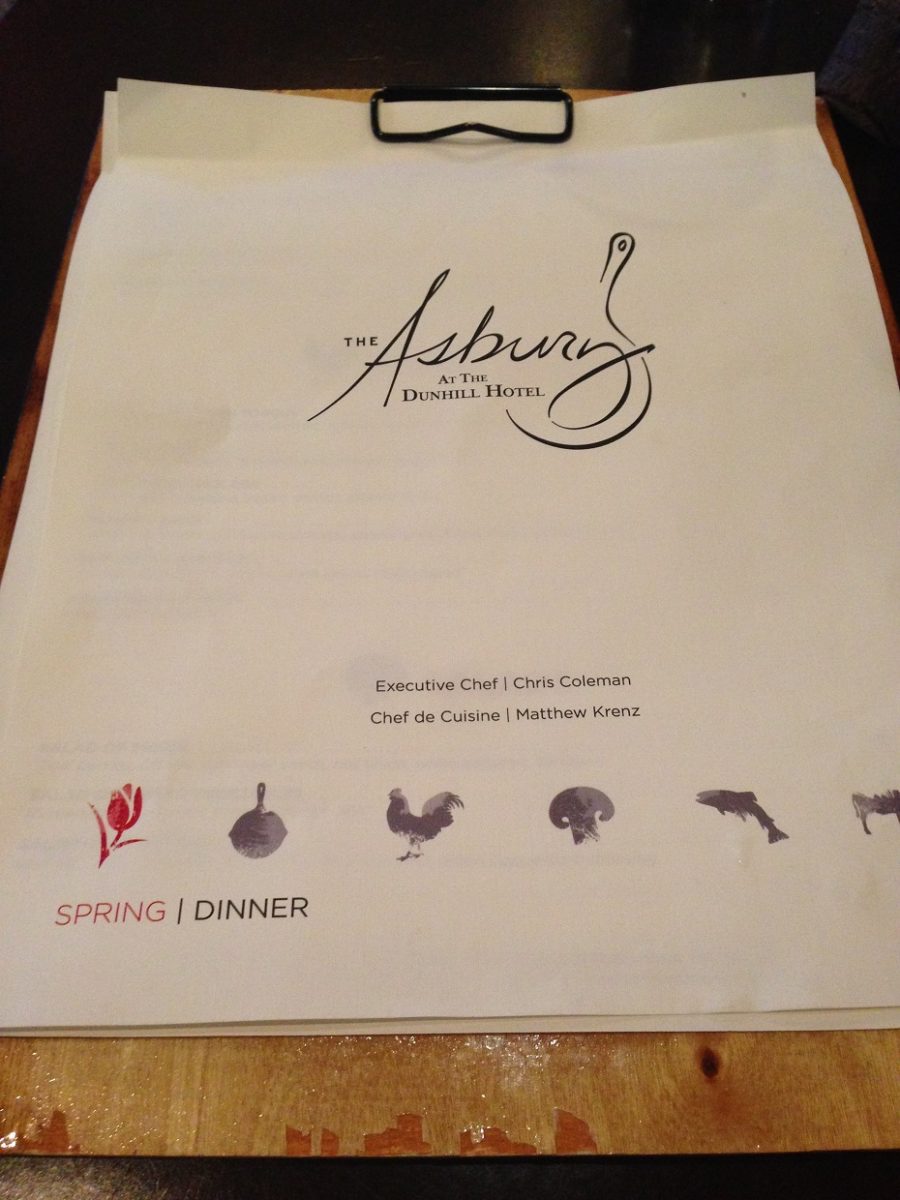 The Asbury offers a short list of craft cocktails and local Charlotte beers, as well as a longer list of wines. Diners even have the opportunity to try a wine flight for $20.00, with their pick of three different wines. 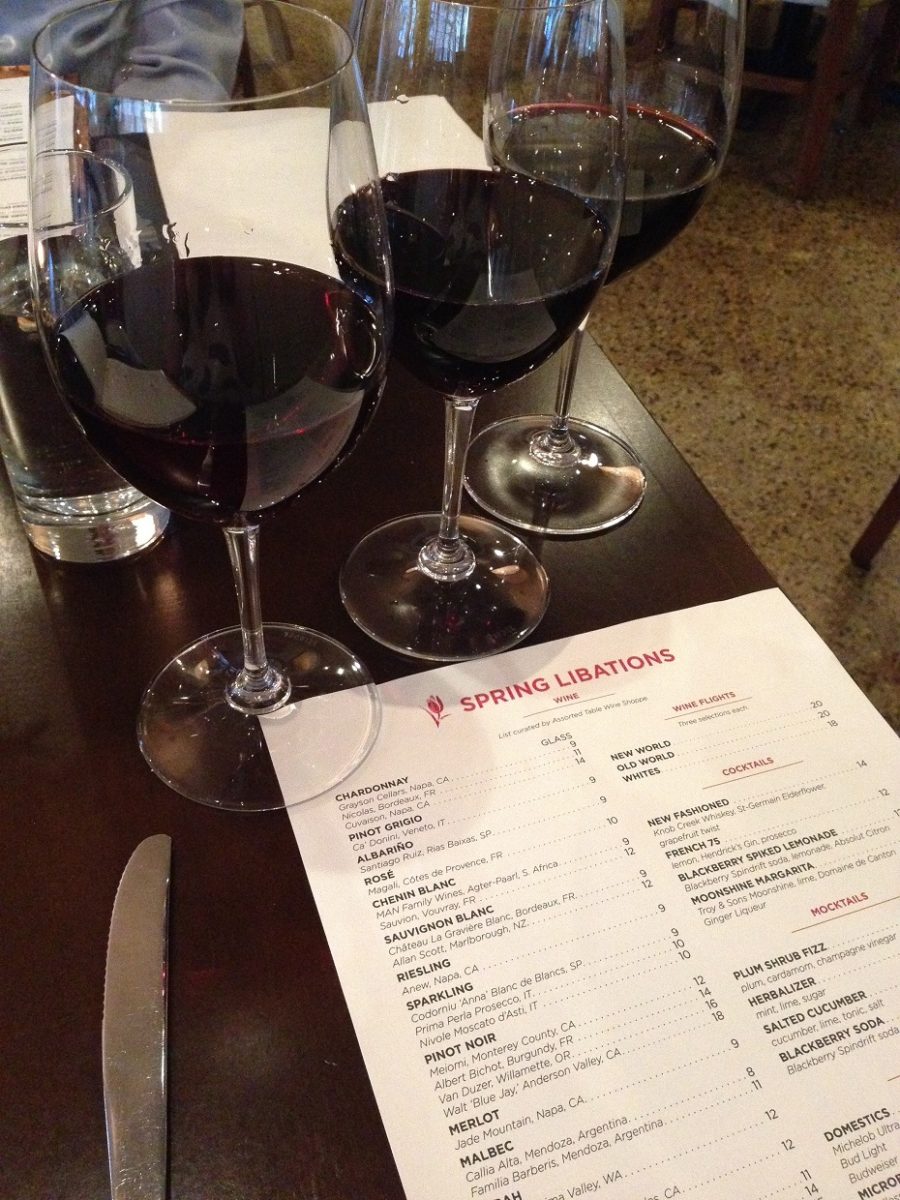 As the server communicated to us, the popular appetizers on the spring menu are the grilled NC bison tongue and the 62 degree duck egg, so of course, we opted to try both. 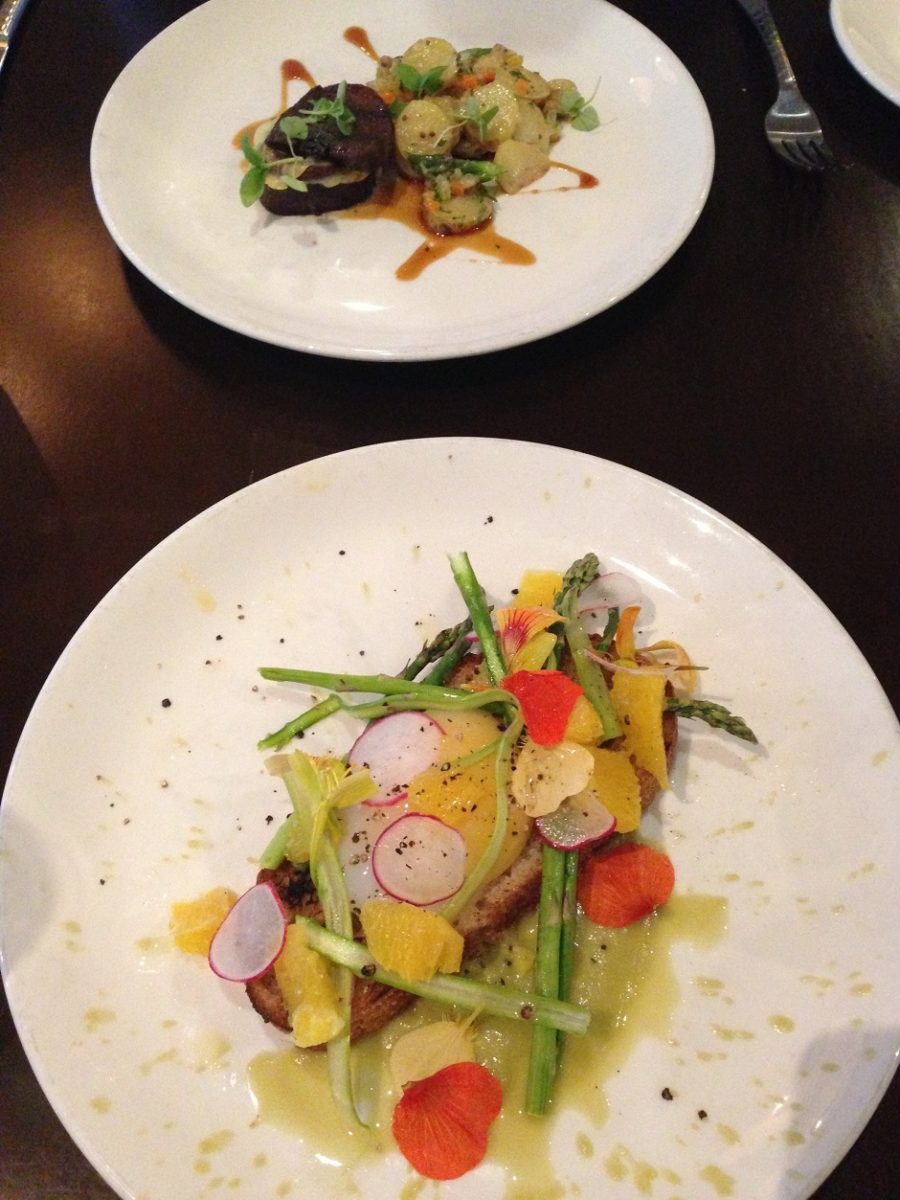 Raclette cheese is served in between the bison tongue, like a mini slider. I’m a very adventurous eater but never have I tried bison tongue. It tastes like a premium piece of meat – tender, flavorful and juicy, thanks to it being braised overnight. It’s like your mother’s pot roast, but with fresher, melt in your mouth flavors. As if the bison tongue wasn’t enough to spark your tastebuds, it’s served with a horseradish potato salad with an Asian fusion taste, which bring in some bolder flavor and depth. This dish may have been my favorite of the night – the Asbury team did such an amazing job utilizing fresh and local ingredients to appeal to the tastebuds. 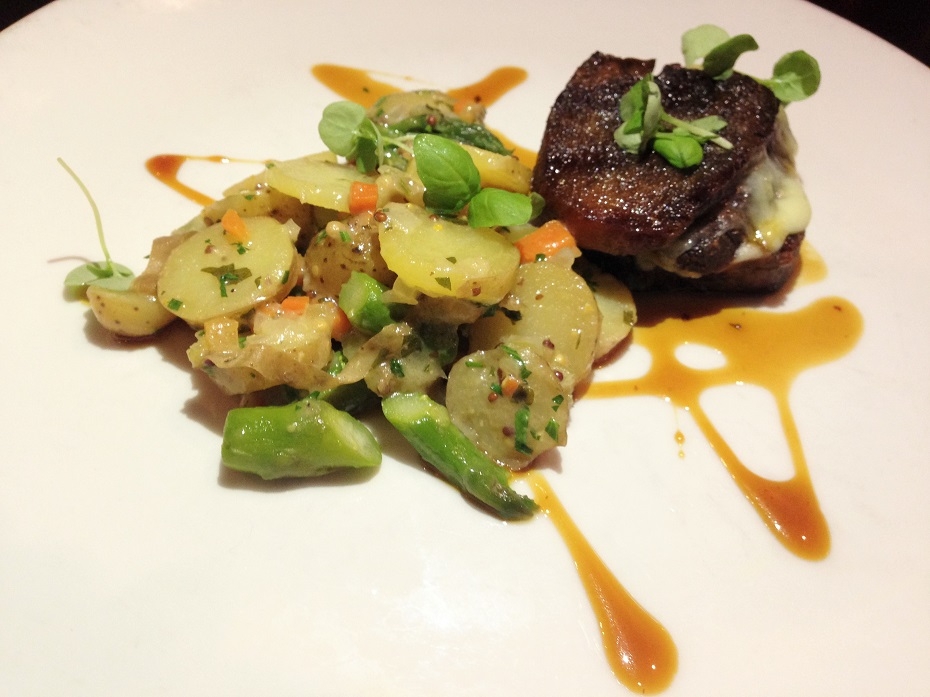 The 62 degree duck egg is cooked for 45 minutes at 62 degrees, like you may have guessed. It’s served room temperature over a slice of sourdough toast, with asparagus, radish, orange and pickled ramps. The orange/citrus flavor was subtle, but just enough for you to notice it’s there. The egg takes on a gelatin consistency and runs over the crispy bread, which can then be soaked up with the asparagus and radish. The flavors offer the similarities of a light brunch, but doesn’t give you that heavy feeling of fullness after. 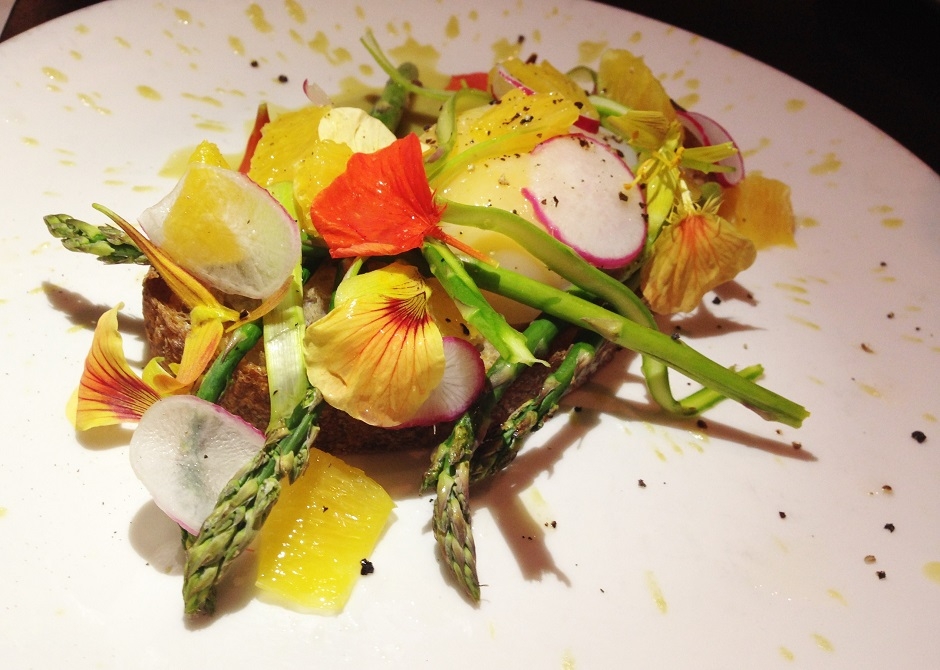 Next up on the list was the pressed lamb shoulder and the roasted chicken. The lamb shoulder is braised for 24 hours to create that fall off the bone perfection and exquisite aroma. I loved the demi glaze which had the slightest hint of mint. 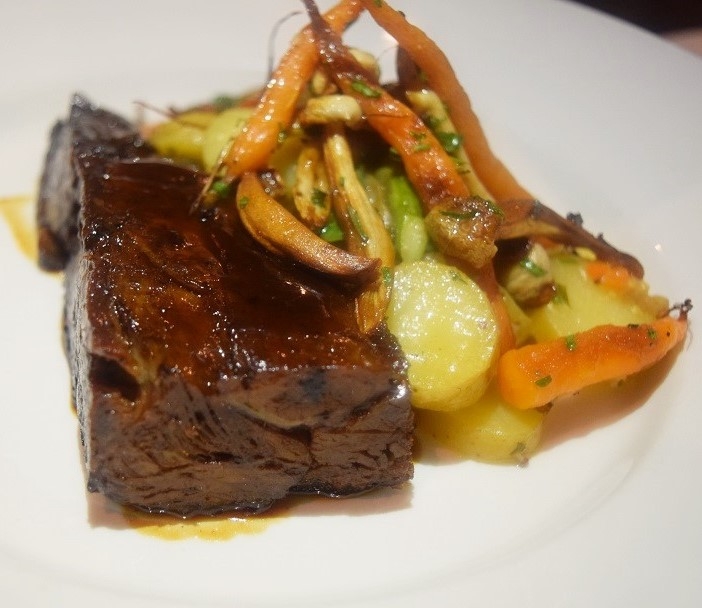 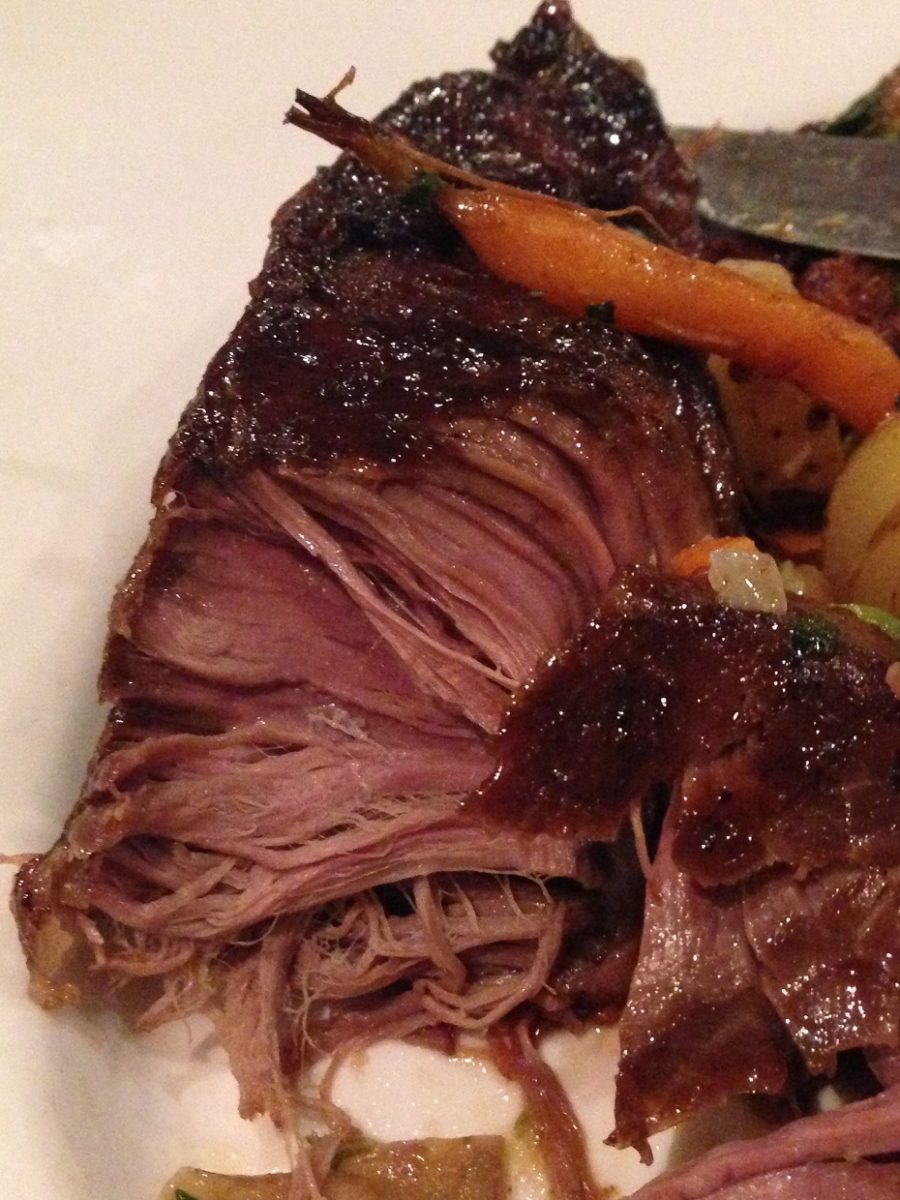 The roasted chicken dish came atop mashed potatoes, whipped with arugula and goat cheese. Talk about inventive! The chicken flavor was also unmatched – the way they create that tender juiciness is through rolling the chicken skin and then reintroducing it. The caramelized beets add a combination of sweetness and earthiness to the dish. Chicken is not something I’ll usually order when out since it’s so plain, but the Asbury totally transformed it into something amazing. 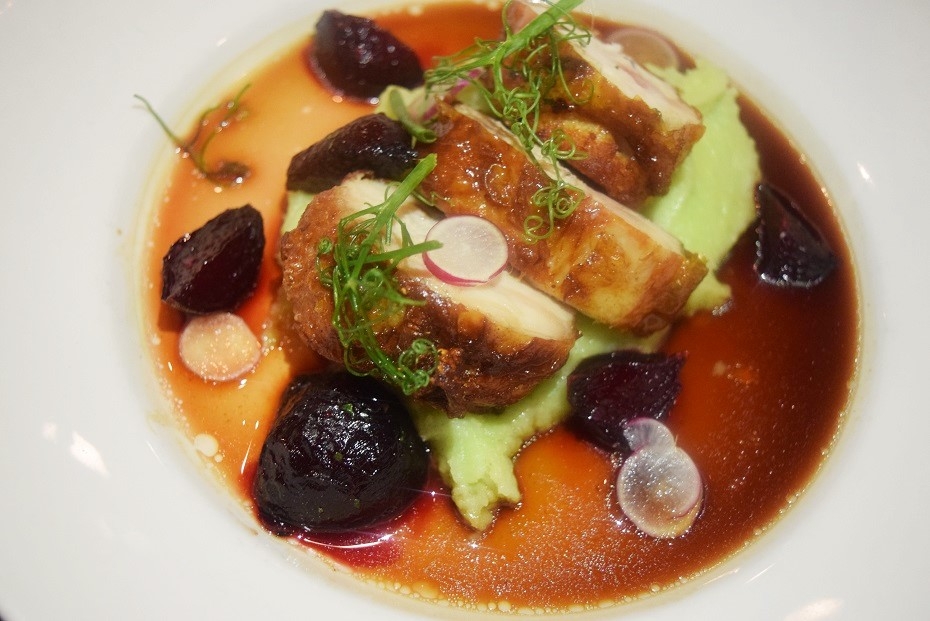 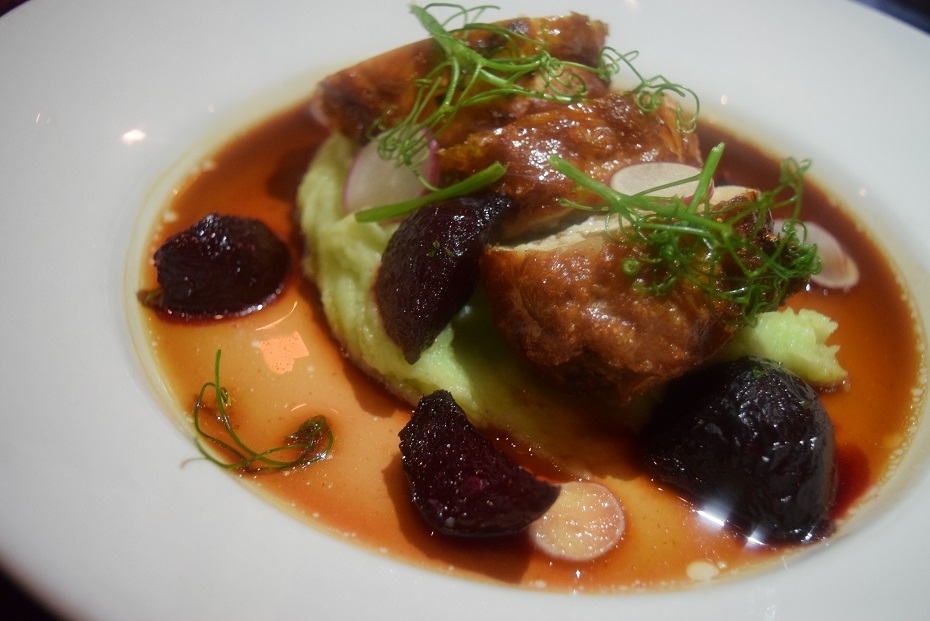 I was totally in my element! 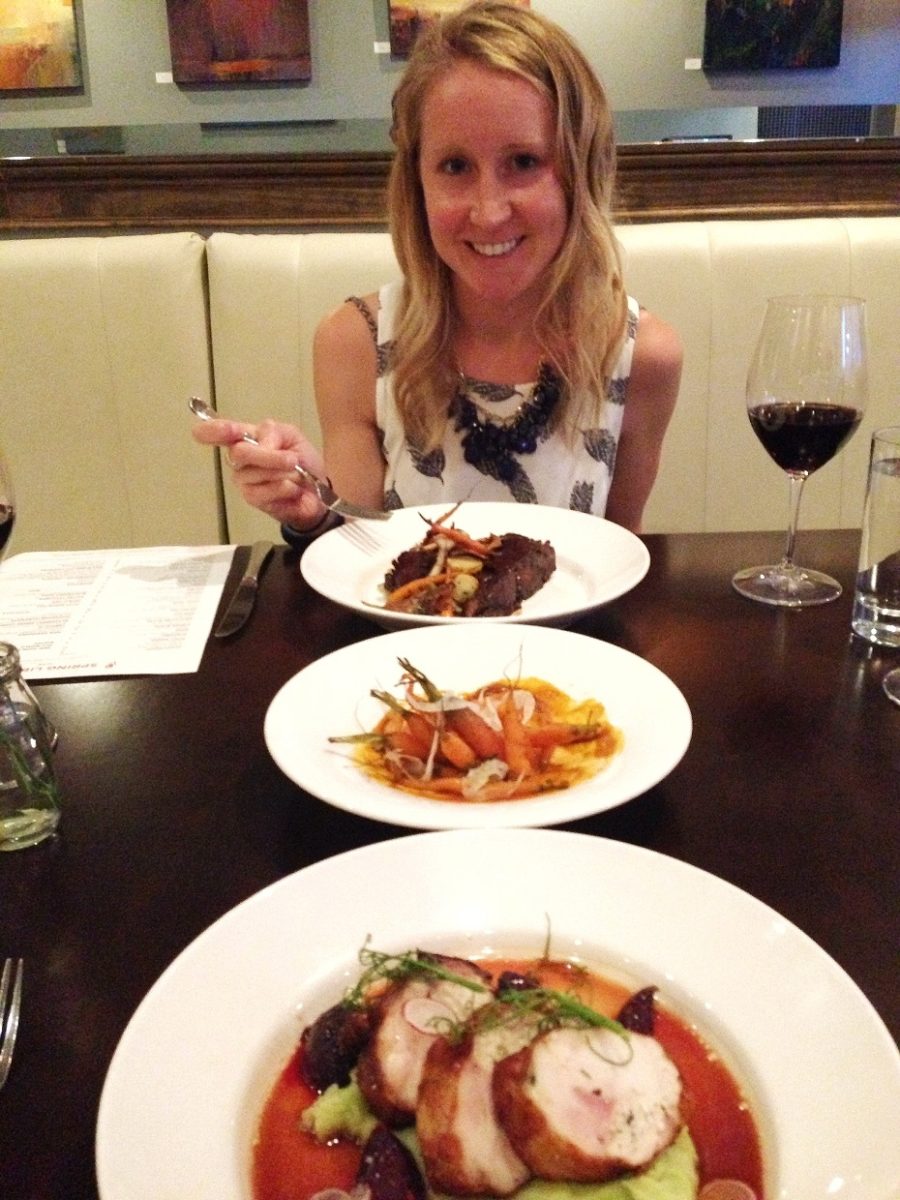 Squeezing room in for dessert, we opted for the key lime pie, which was a tart key lime frozen soufflé with toasted marshmallows. I loved how the dish itself smelled exactly like a campfire, bringing me back to summers around the campfire roasting s’mores. Isn’t it amazing how food has the power to do that? 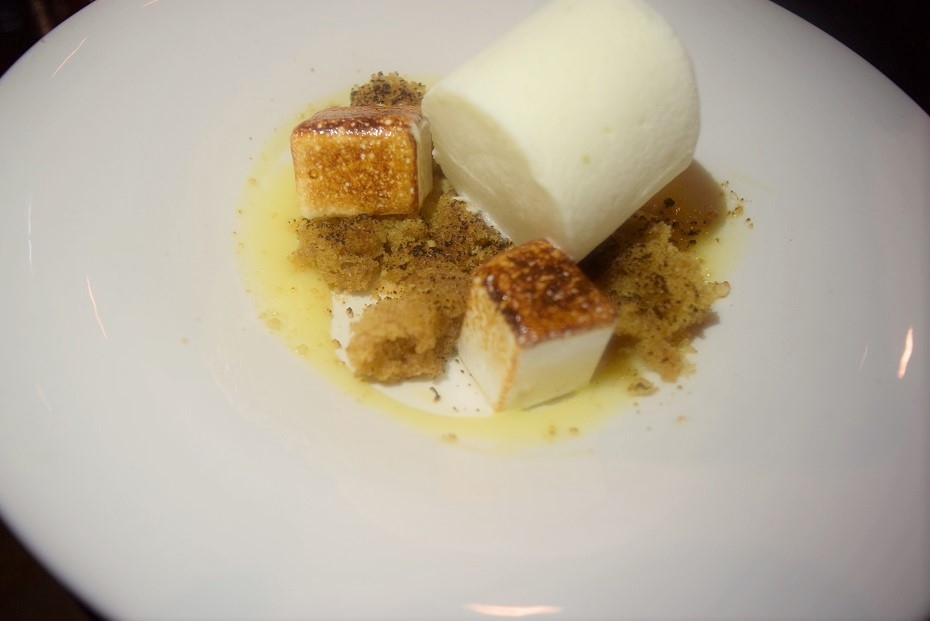 And then Chef Coleman also surprised us with another unique childhood memory. Remember the root beer float? He asked us, “What’s the best dessert of all time?”

In my head, I was thinking cheesecake or a slice of apple pie with real whipped cream. He came out with a combination of coffee and dessert – “something you can drink with a straw or eat with a spoon – A coffee porter float.”

This out of the box dessert was made with Fullsteam’s porter (out of Durham) and dark chocolate. It was like a chocolate iced coffee milkshake…with beer.  I ate it with a spoon (as I always did with root beer floats), while my husband drank it out of a straw. 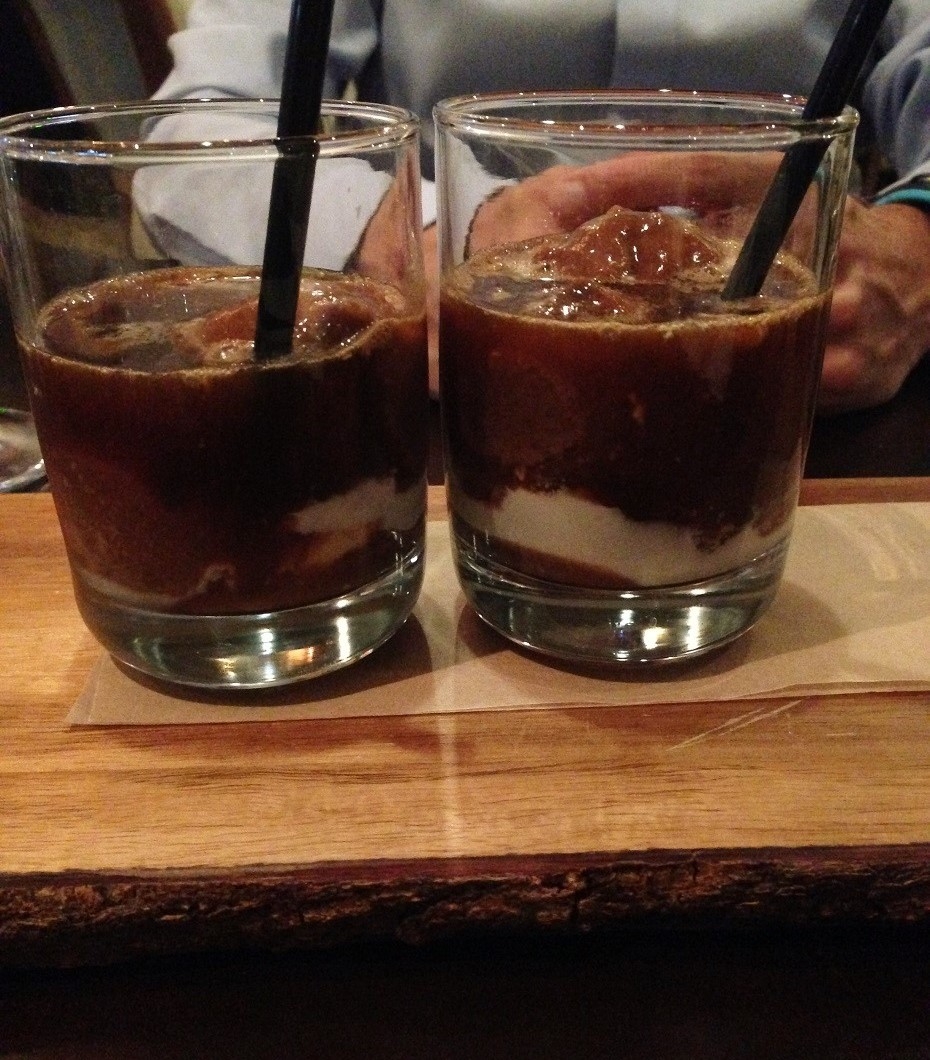 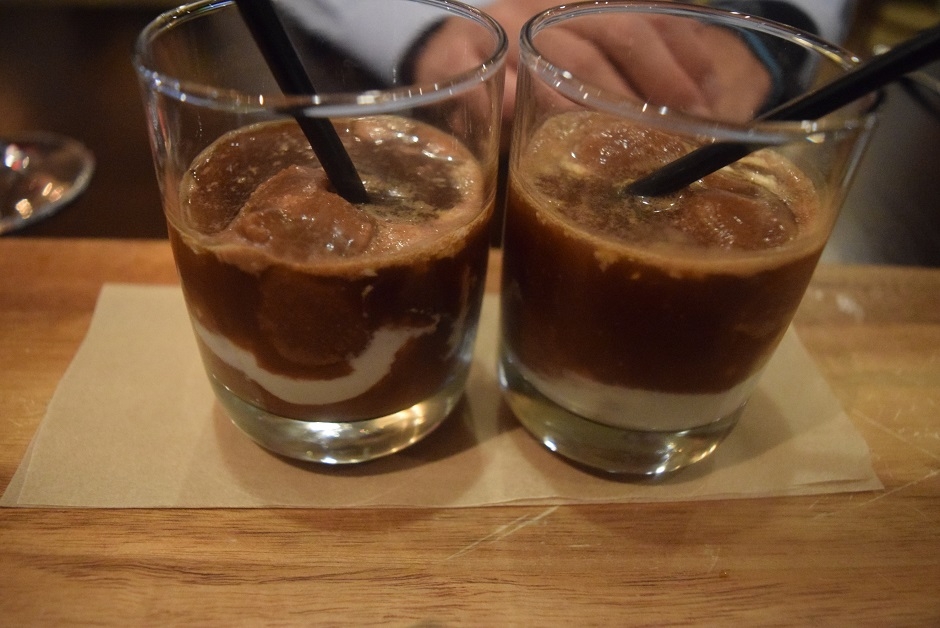 I have nothing but good things to share about the Asbury, and I highly recommend it if you’re in the Charlotte area.