As an Amazon Affiliate, I may earn from qualifying purchases

We spent the weekend in Asheville with some of Ed’s family. It was a pretty jammed weekend, but I think Cam handled it pretty well. We had lots of great food, as to be expected when you’re visiting Asheville.

She did great on-the-go. We tried to mix it up so we didn’t always have her in her carseat (she hates being in there too long). I wore her a bunch in the ergo, and when we were at meals, we just passed her around the table so people could hold her. It worked fairly well since Cam’s not an overly fussy baby.

One of Ed’s cousin’s wives is pregnant right now, and they are having a little girl in January! So, I think it was fun for her to see what life could look like 6 months later with a baby girl. 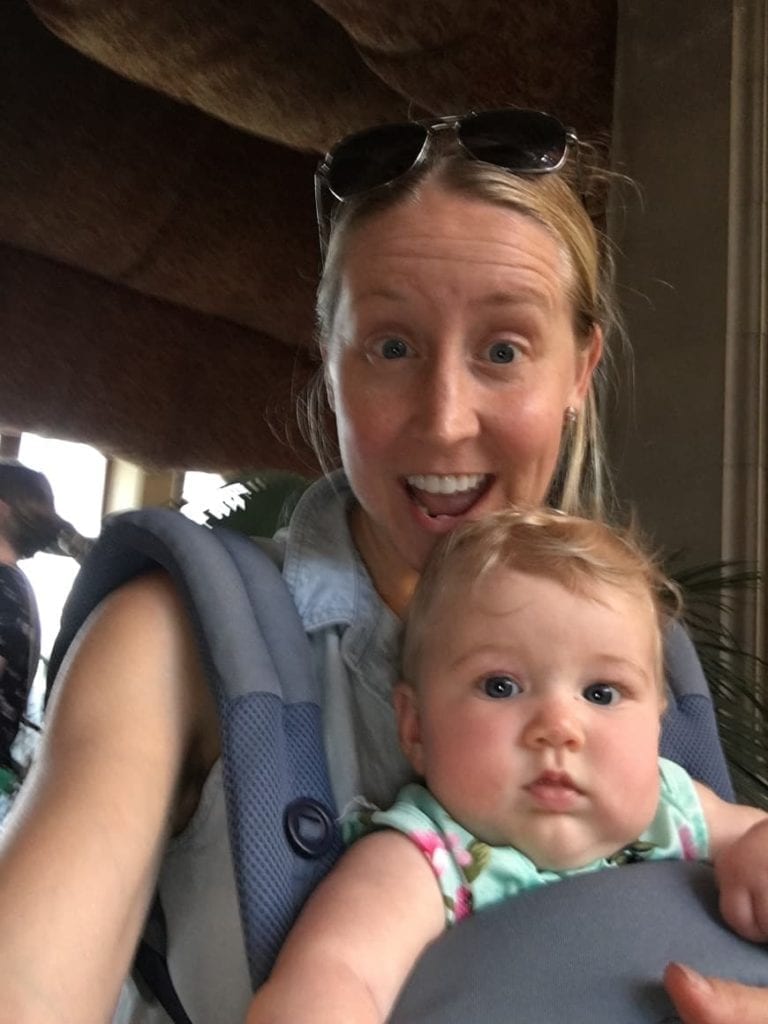 Rather than recapping our entire trip, here are some of the highlights! 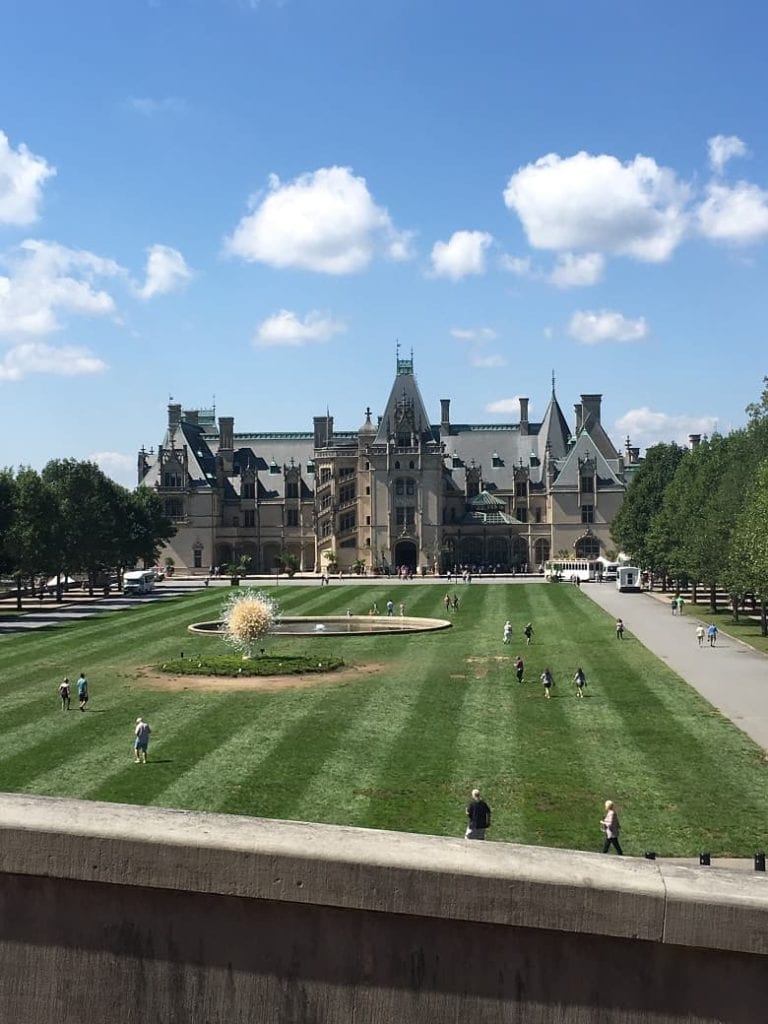 We arrived Friday early afternoon, while the rest of the group got there Thursday night. They did a rooftop Biltmore tour Friday morning that we missed. But, we arrived in time for the tour of the actual house. 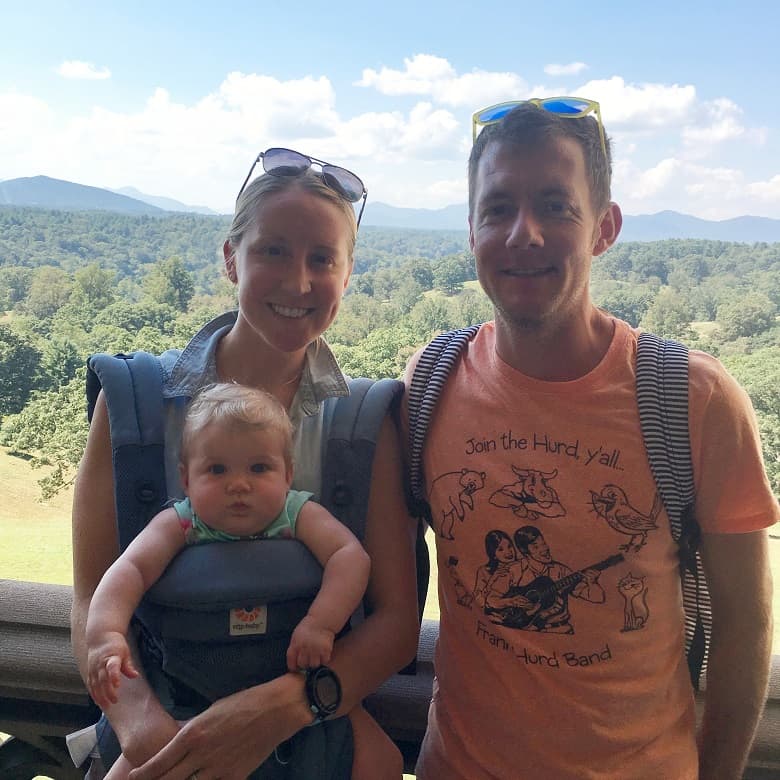 Ed and I had done this tour years ago during Christmas, which I highly recommend because they have hundreds of Christmas trees and decorations throughout.

After the tour, we stopped by the winery on the estate for a refreshing glass of wine. 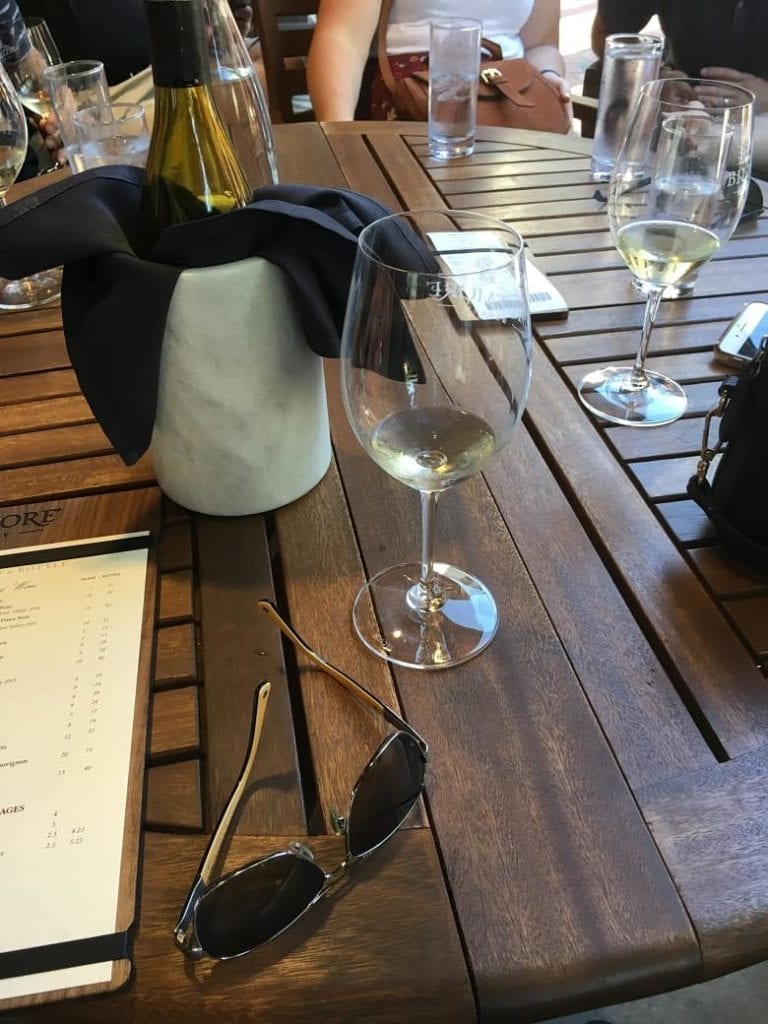 Since we were supposed to originally have a large group (some people backed out last minute due to the fear of poor weather after Hurricane Florence), we planned to eat at places that could accommodate large groups.

Friday night, we got dinner at Brasilia – which I think was my first time at a Brazilian steakhouse.

We put Cam in a high chair for the first time. It was a little big but we put a blanket behind her and I kept my arm around her. She loved sitting at the table though.

Just had to be careful at what we placed in front of her (like no utensils, sharp knives, wine glasses, etc) because anything within grabbing distance is fair game.

The way Brazilian steakhouses work is that they just come around with skewers of meat and you just decide what you want. I tried 5-6 different things, from lamb, to bacon wrapped filet and chicken and everything was good.

I just took like a bite of everything because there’s no way I could (or would I want to) finish this much meat. I also had a large salad plate from the salad buffet, which I enjoyed. 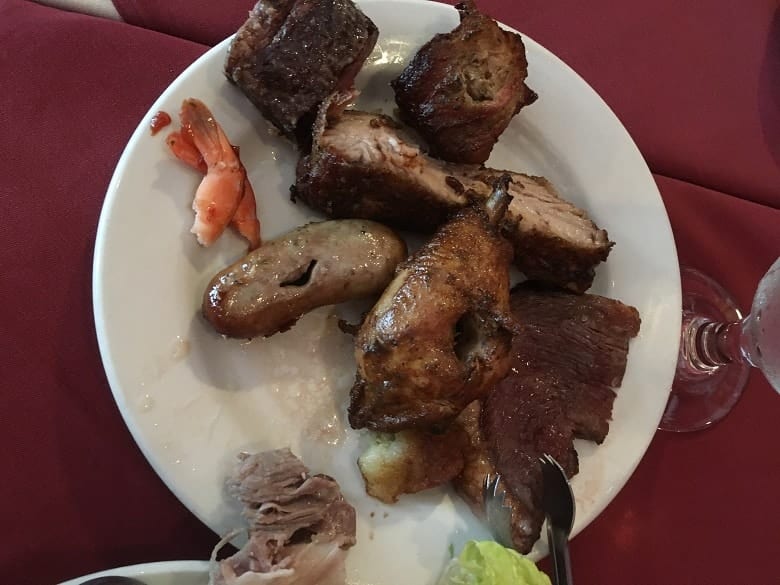 On Saturday morning, we were supposed to go hiking with the crew but Cam slept in and I didn’t want to wake her. By the time she was up and fed and I had pumped, it was too late to join the crew.

Instead, we got breakfast and then I took her to the gym with me and I did a little circuit workout while she later napped in the carseat.

My workout was pretty random but this is kind of what I did:

It was only a 20-25 minute workout but I felt like it was really efficient. And a fun one, like this 30 minute circuit workout

I’ve come to terms that with kids, short and sweet is the key for workouts sometimes and it makes me work harder and more efficiently.

Long gone are the days where I can just go out for a 10 miler whenever I want to. <— Mixed feelings about that last part, but that’s just life right now!

If you have a trip to Asheville on the agenda soon, make sure to make a stop at 12 Bones BBQ. It’s a fun, “get yir hands dirty and eat” kinda place. It worked perfectly for our group. You can pick your sandwich or entrée and some sides.

I was really debating on sweet mashed potatoes + baked beans for my sides but I talked Ed into getting those so I settled on corn pudding and mac ‘n cheese with my pulled pork pineapple sandwich. SOOO GOOD, you guys. This was a real winner and loved the atmosphere.

I was about ready for a nap like Cam after lunch but we had reservations for a brewery tour at Sierra Nevada so headed there. 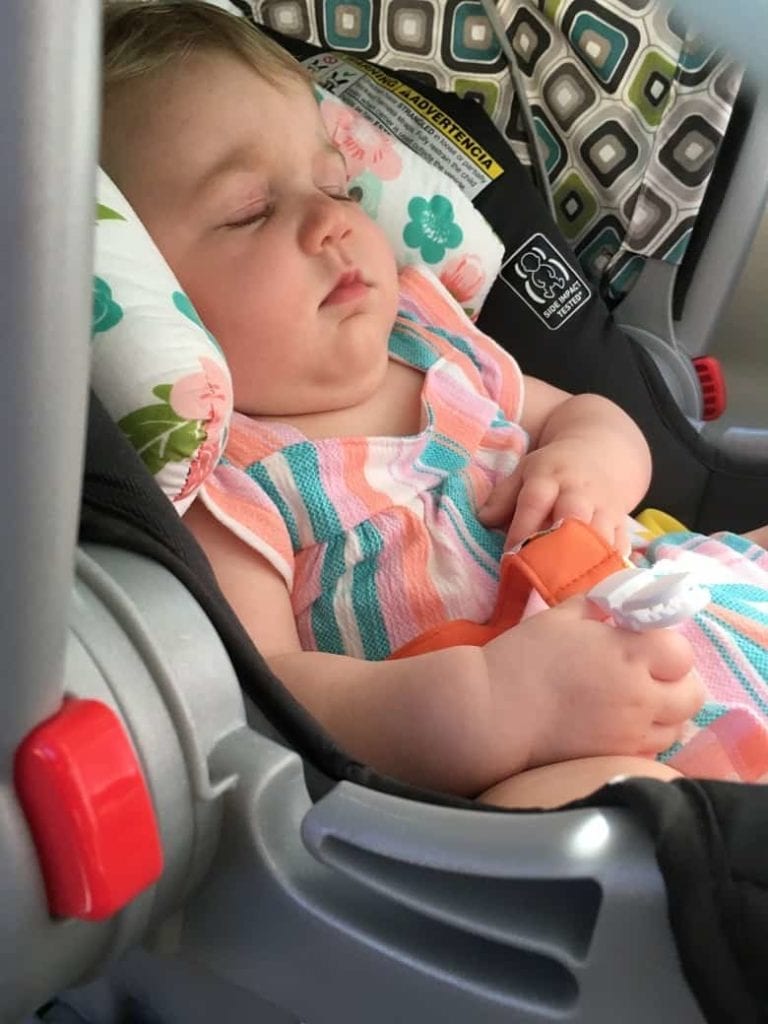 Everyone did a tour of the brewery. Unfortunately, no one under 21 is allowed on the tour so I stayed back with Cam, which worked out because she was in desperate need of a nap anyway since the above one was only 15 minutes.

She had been fighting it all day (which she tends to do when we’re out and about and there’s so much to see and do = #fomo). I walked her around in the stroller until she fell asleep and then we went to the air conditioned car where she napped and I tried to close my eyes too.

30 minutes later, she was a new baby and refreshed (30 minutes is her usual MO for daytime naps, sadly) so we went back in to grab a beer while we waited for the group to be done. It was really loud outside with all the music so we just popped out there for a minute or two.

Once the group was done, we had a little bit of time until our table was ready. I fed Cam and heard about the tour. 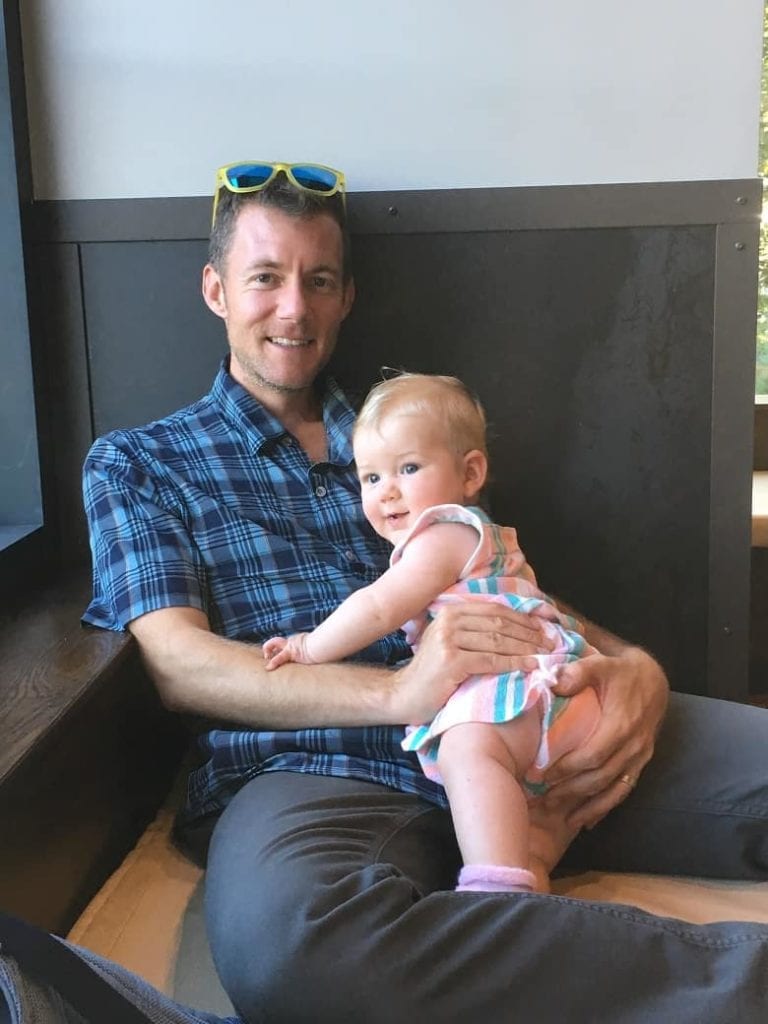 We enjoyed dinner with everyone and I was so in the moment that I completely forgot to take a picture of my food (or maybe I was too hungry?). Anyway, I got the pizza and it was good.

Cam stayed up way past her bedtime for both nights as expected, but she was a trooper. Fortunately, it didn’t wreck her sleep too much and on Saturday night she actually slept from 9-8:30, with one wakeup to eat. 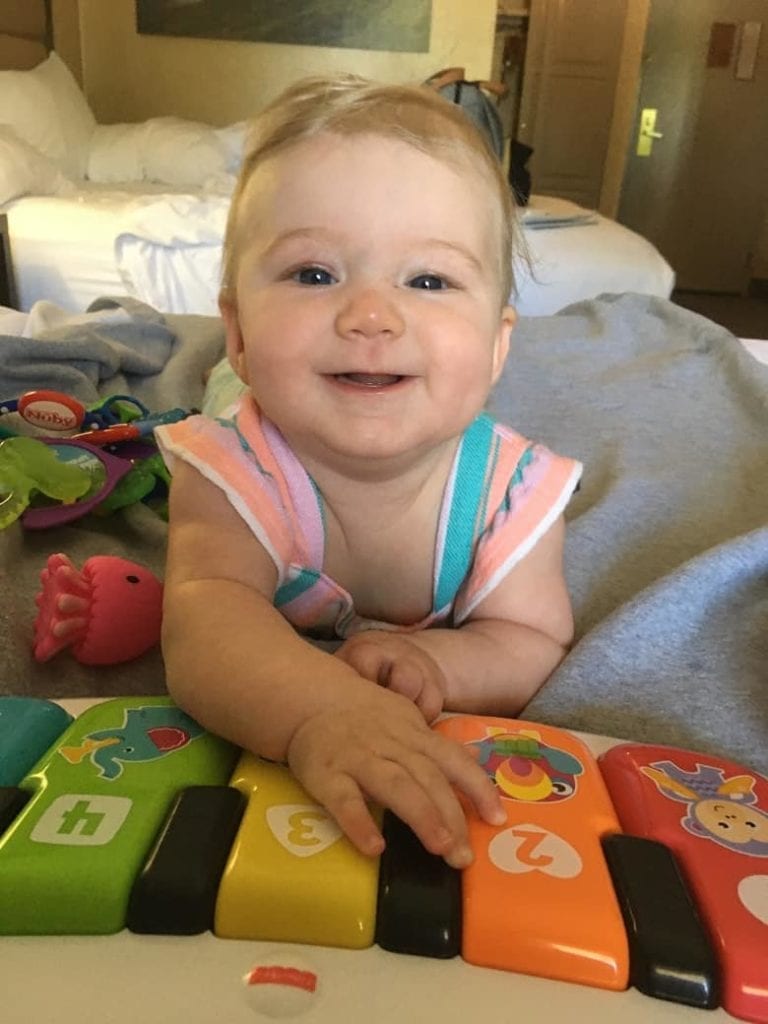 We drove back Sunday morning after a big breakfast with the crew. Picking up Tater from daycare is always my favorite part of coming back from a trip because she’s SO excited to see us.

The rest of Sunday looked like some laundry, meal prep, playing with Tater and getting organized for the week. We have Cam’s 6 month appointment this week, I have some project deadlines and new clients, and a few appointments.

Should be a busy one!

Thanks for stopping by the blog today.

Have you ever been to Asheville? Do you have a favorite spot to eat?

What are you looking forward to this week?