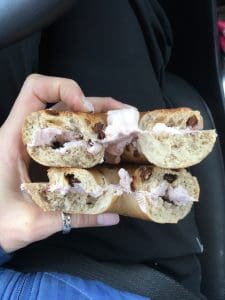 Is it possible to tune out dieting messages during the holidays? YES.

The holiday season brings out so many feelings. Stress, anxiety, excitement, comfort, unease, exhaustion, laziness, hunger, fullness, and so many more. Some of these feelings are more pleasant than others.

For me, I always tend to get a little anxious during the holidays for a variety of reasons. First, I hate going to the post office to mail out packages. Just the idea of a long line spikes up my blood pressure. I hate the thought of not getting my Christmas cards out in time, or forgetting mailing a card to a loved one.

I stress out about not finding the perfect “thoughtful” gifts for people.

But, when it comes to food, I’ve figured that out in a way I don’t stress about it. You guys – with everything else going on, food should be just one LESS thing to worry about.

And when you go in feeling intuitive – it is. The final of the 10 principles of intuitive eating is gentle nutrition. While the principles aren’t necessarily listed in the order in which you should learn them (note: intuitive eating is never “achieved,” – it is always a work in progress and constantly changing), I think there’s a reason they list this one last. You can’t focus on intuitive eating if you’re only focused on eating the most nutritious food.

It means that you’re recognizing the need to listen to, understand, and get to know your body and hunger before thinking about nutrition. Sometimes the right choice for you in the moment is not always the most nutritious choice. Here are some other ways to eat intuitive during the holiday season.

Tune out the diet noise

The dieting voice will tell you not to eat those Christmas cookies. You can spend time baking them for others, but you’re not supposed to indulge yourself, according to diet culture. If you’re attending a Christmas party later, diet noise would encourage you to skip a meal or snack beforehand to account for over-indulging.

The intuitive voice would not skip a meal, but instead, eat regularly because she’s hungry. You know that if you’re attending a holiday party, you may have more food choices available, but you’ll still be able to decorate your plate accordingly and eat as much as you need to. The intuitive eater would give herself some grace and know that, it’s okay to eat past fullness sometimes in social situations. Food is social and about making memories, and even if she was full yet she wanted a piece of pie, she could enjoy it.

Low fat cookie mixes or sugar free beverage mixes just may not do the trick for an intuitive eater, despite what the dieting voices tell her. An intuitive eater knows that there’s a difference between fullness and satisfaction. The marketing and low-calorie gimmicks don’t work for this person, because she doesn’t base her food choices off of calories, or grams of fat or sugar. She bases her food choices off of what sounds satisfying in the moment.

Maybe that means cookies for breakfast or extra peanut butter in her oatmeal. And maybe that means a burger with fries. And sometimes, after too many cookies or a larger meal earlier in the day, that means a lighter salad. It doesn’t mean skipping a meal. An intuitive eater knows that a salad may fill her up in the moment, but leave her wanting more later, when she really wanted the pasta dish. Yet, an intuitive eater also knows when to eat with her mind, too. If she’s out running errands all day, she thinks ahead to pack snacks for when she knows she’ll need to eat. Or, sets aside time to stop for lunch. An intuitive eater may order extra veggies with lunch if they sound satisfying or she knows they’ll make her feel better later.

Live in the moment

An intuitive eater doesn’t stress about her past food choices, or worry about a “binge” later on. She’s at peace with food because she knows that her body will guide her choices and if she just listens, she’ll be okay. She knows that drinking or eating more on one night doesn’t equate to gaining 5 pounds overnight. Just as she knows that if she accidentally undereats one day, it won’t slow down her metabolism overnight. The intuitive eater understands that the big picture is over time, and over time, her food choices even out.

The intuitive eater doesn’t have to turn down dinner with friends if they’re going out for pizza or chinese food because she doesn’t have any food rules, or foods that are off limits. Everything she eats doesn’t need to be “clean,” and unprocessed.

In fact, she doesn’t think twice about her food choices because she makes them and moves on. More importantly, she enjoys the company, the memories and the moments around food. She takes the time to enjoy the aroma that food gives off, the toppings on the pizza, and the deep red cabernet or ice cold draft beer she pairs with it. The intuitive eater actually feels less stress when someone else is doing the cooking. Rather than trying to calculate the macros or ingredients involved in the dish, the intuitive eater enjoys what is served to her, without knowing what that may be ahead of time. If she likes something more than something else, she puts more of that on her plate. She tries the dessert because she’s curious about it, but it’s not her favorite, so she stops after a few bites. She doesn’t feel the need to go crazy over the cookies in the other room because she had a few earlier. And she had seconds at dinner, so she’s both full and satisfied. We all deal with stressful life situations at one point or another. It’s difficult to eat intuitively if you can’t separate the stress from your food. You don’t want to equate food and stress. Eating should not be a stressor, but rather, it should be a pleasurable, enjoyable experience. Ideally, it happens more often than not, without distractions. The intuitive eater knows that distraction-free eating isn’t always a possibility, and that’s okay. Sometimes, it means eating quickly in the car or at your desk, because getting food in quickly is better than not getting it in at all.

Eating intuitively doesn’t mean never emotionally eating. Eating is emotional – there’s no way around that. We form memories around food, we recall happy times, we associate sadness with food sometimes. All of that is okay. What becomes problematic is when we only feel our feelings through food. When we become numb to letting ourselves feel what we need to feel, we’re using food as a feeling replacer and not as nourishment.

The intuitive eater knows that food won’t solve problems. Cookies and wine won’t solve a bad night at work. Ice cream could be the answer to satisfaction, but it won’t help you cope with anxiety, loneliness, boredom or anger. Those feelings are separate from food. Most of all, the intuitive eater is confident in herself and her choices. She understands that what she wants and needs in the moment may be different from her friend or sister, even if they’ve spent all day together. She bases food choices off of her individual needs, not marketing gimmicks, not others’ needs, and not dieting thoughts.

Sarah Schlichter is a Registered Dietitian with a Master’s in Public Health Nutrition. She specializes in sports nutrition and intuitive eating, and recipe development. She also co-hosts the podcast, Nail Your Nutrition.
12 Comments
Join The Conversation