Hi guys! Happy Wednesday, showing a weekend excursion of eats and adventures. My sister and her boyfriend were in town visiting, so lots to share. As expected, I feel like we were eating the majority of the time, but so much to share in so little time. 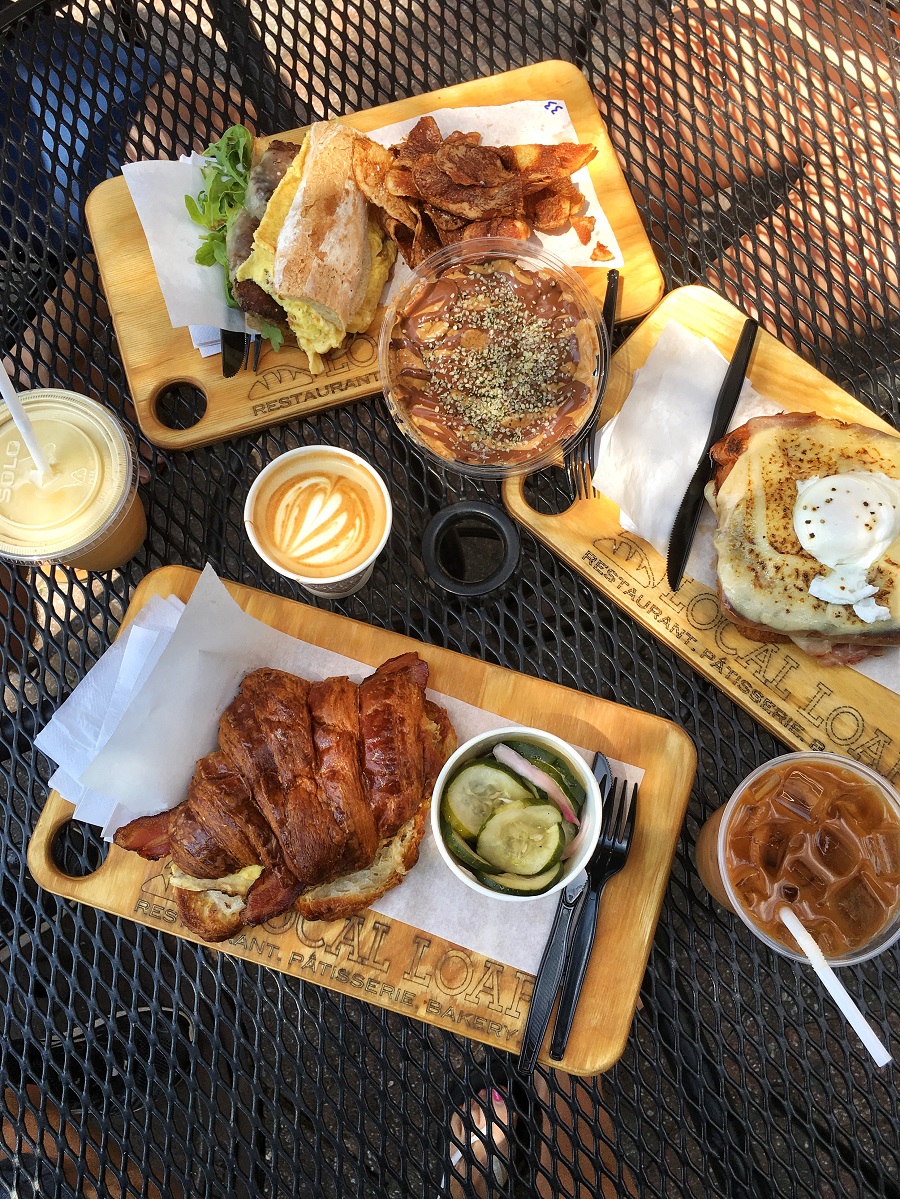 My sister and her boyfriend arrived Friday evening. Tater and I picked them up from the airport and brought them back to our house for some burgers on the back porch. Ed grilled up some burgers, corn on the cob and sweet potatoes, and it was the perfect night to eat outside and catch up! We then went to a local brewery to hear some live music. It wasn’t a late night because we all signed up to run a 5k on Saturday morning! 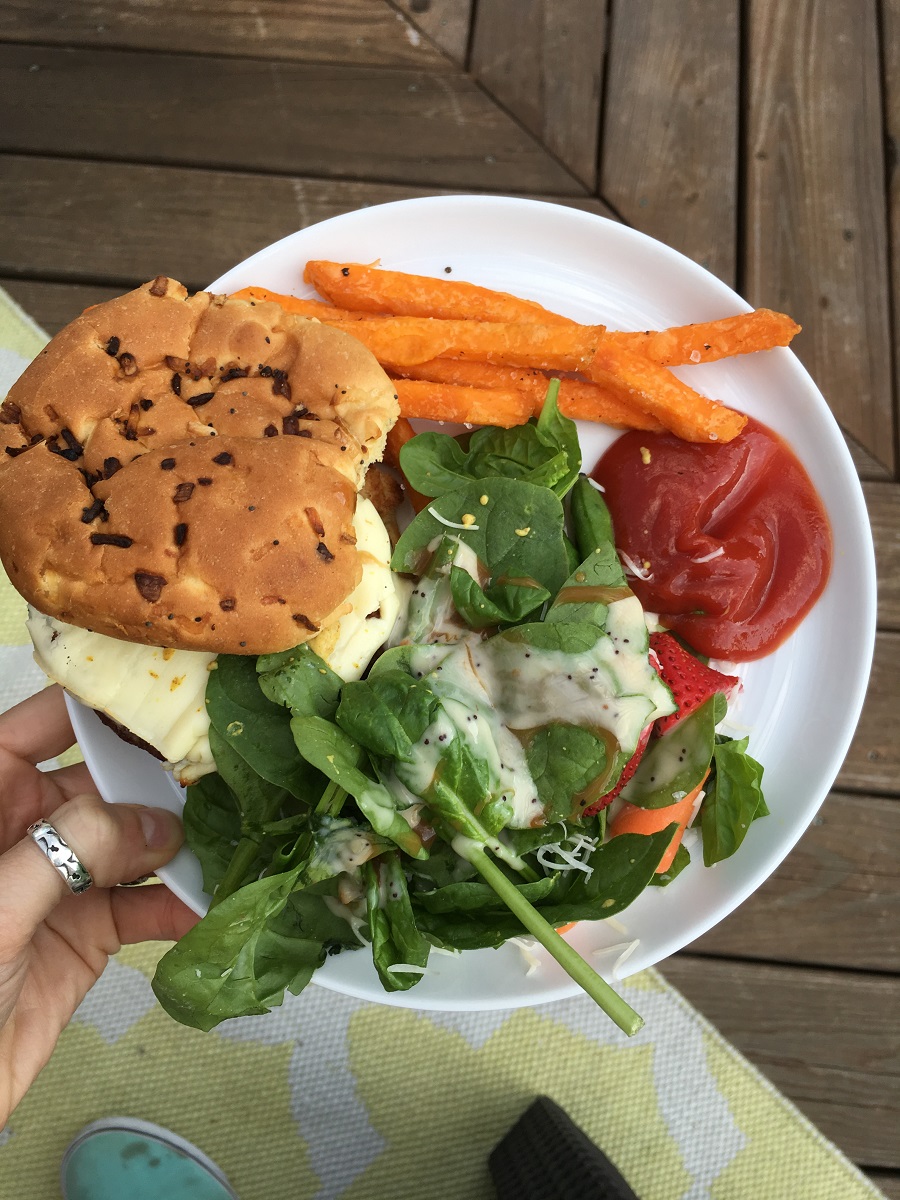 We were up early on Saturday to run the King Tiger 5k in the University area. Caroline and Jamie were troopers for agreeing to run it. Ed has won this race the last 3 years, so he wanted us all to run it with him. 🙂

The fun thing was we signed up as a team, meaning they calculated team scores at the end (sum of all four teammates), and our team, Bucket List Tummy, finished first! Ed won the individual race again this year, of course haha. We had to grab a photo with the mascot, King Tiger himself and Rita, afterwords, before grabbing some iced coffees and taking advantage of the free Rita’s. 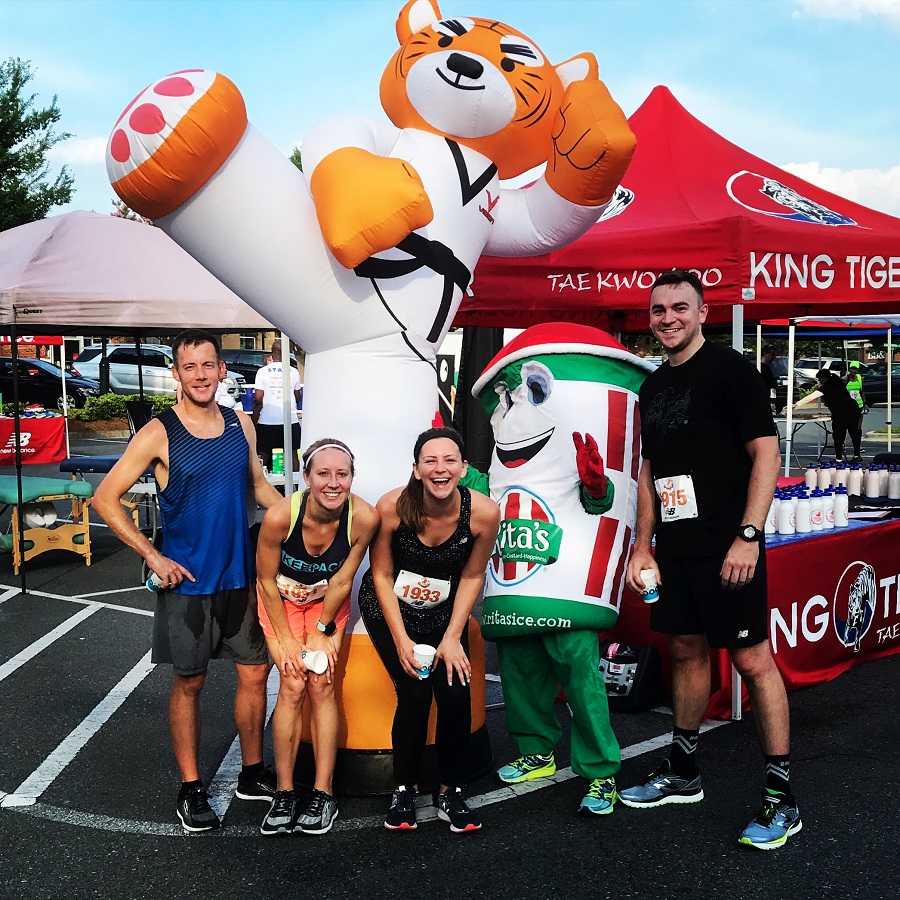 We then headed to a local cafe for brunch, Cafe 100, which has been on my foodie bucket list for a while! Obviously, we showed up all wearing our race T-shirts, because why wouldn’t we do that? 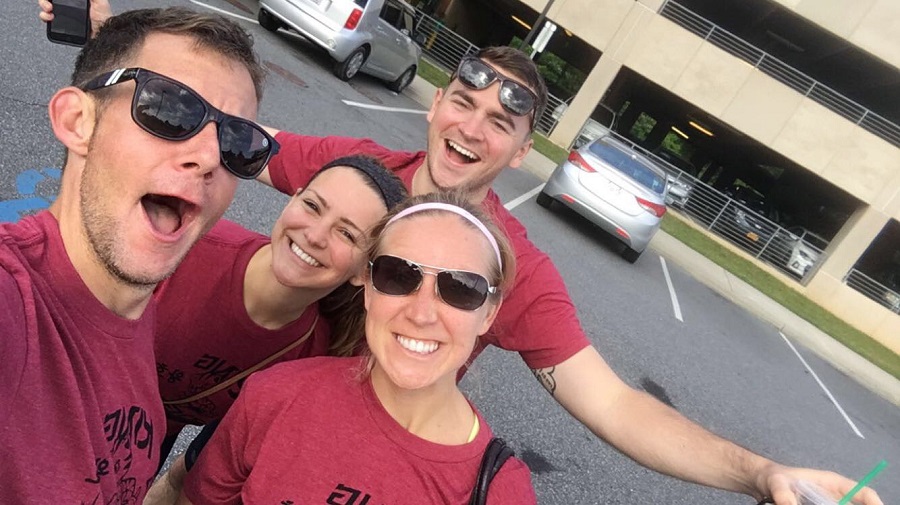 Cafe 100 is in a cute little house in downtown Huntersville, and we ate outside on the porch. Caroline and I went with the special: a sweet potato hash with chorizo, some veggies and an egg. Everything was delicious!

We took Tater for a walk, showered and got ready for the day. We headed down to the Noda area (one of the neighborhoods in Charlotte), and grabbed a late lunch at Haberdish. Haberdish is known for their inventive cocktails and southern style food. I went with the seasonal watermelon cocktail, which hit the spot and screamed summer. My sister had some jalapeno type drink that was amazing too. 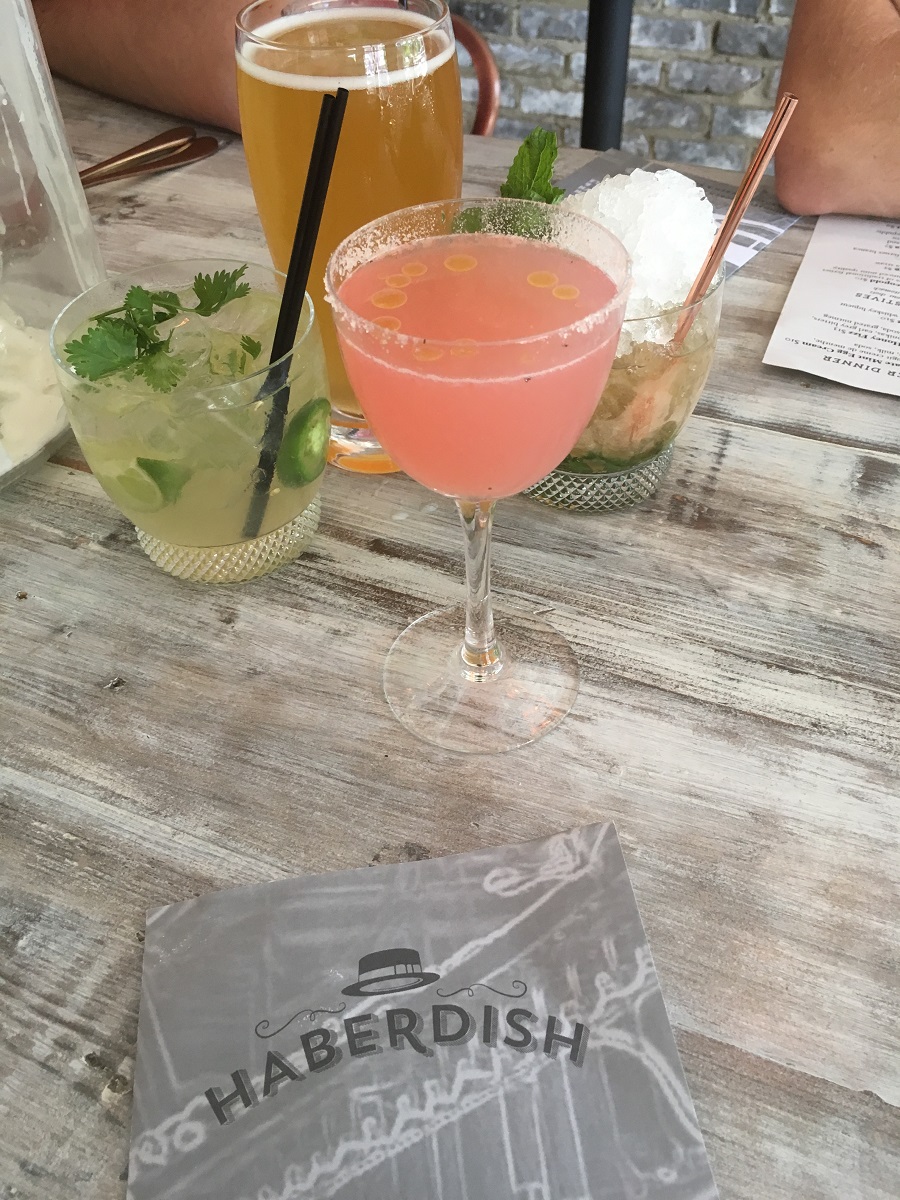 We started with some hush puppies and biscuits with bacon jam for our appetizers, and then split some fried chicken tenders (you HAVE to order fried chicken) and I wanted to try the fried cauliflower steak. 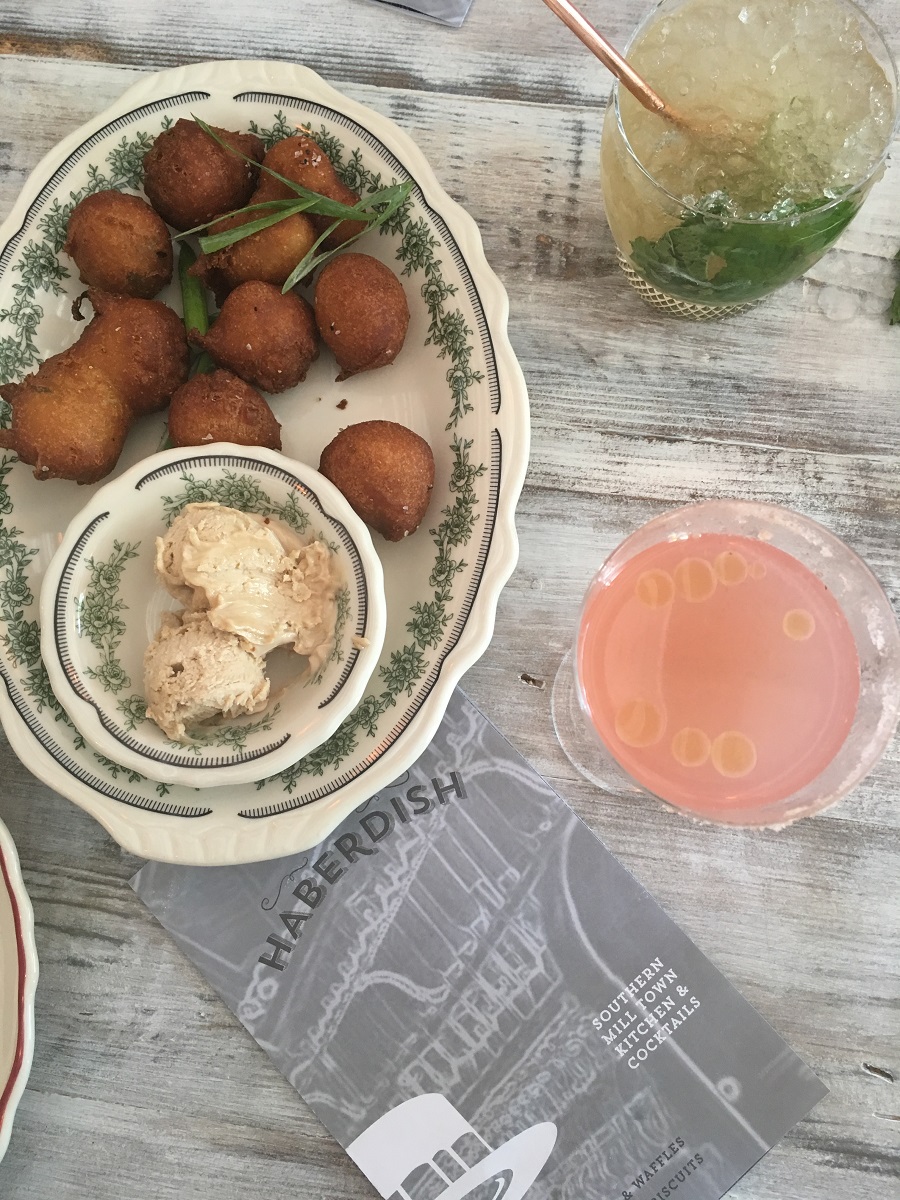 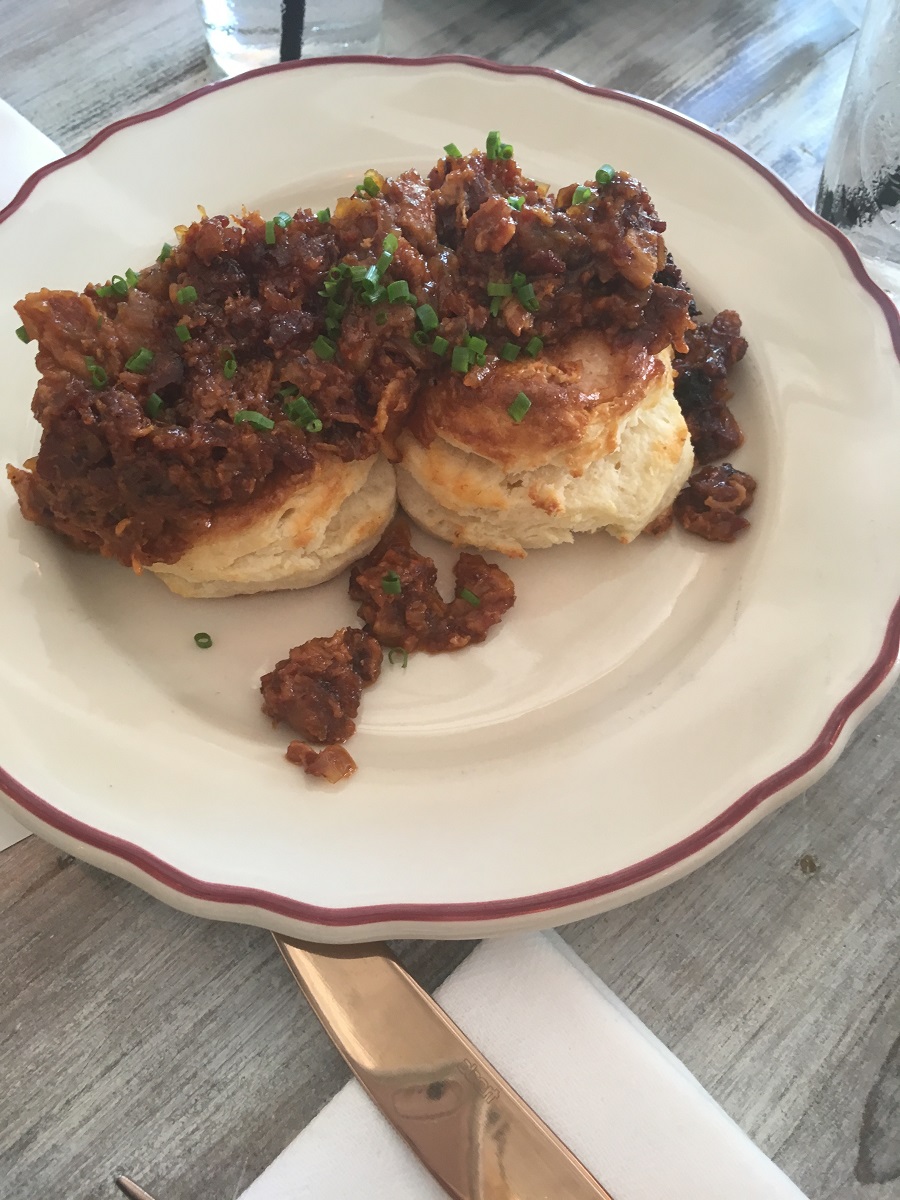 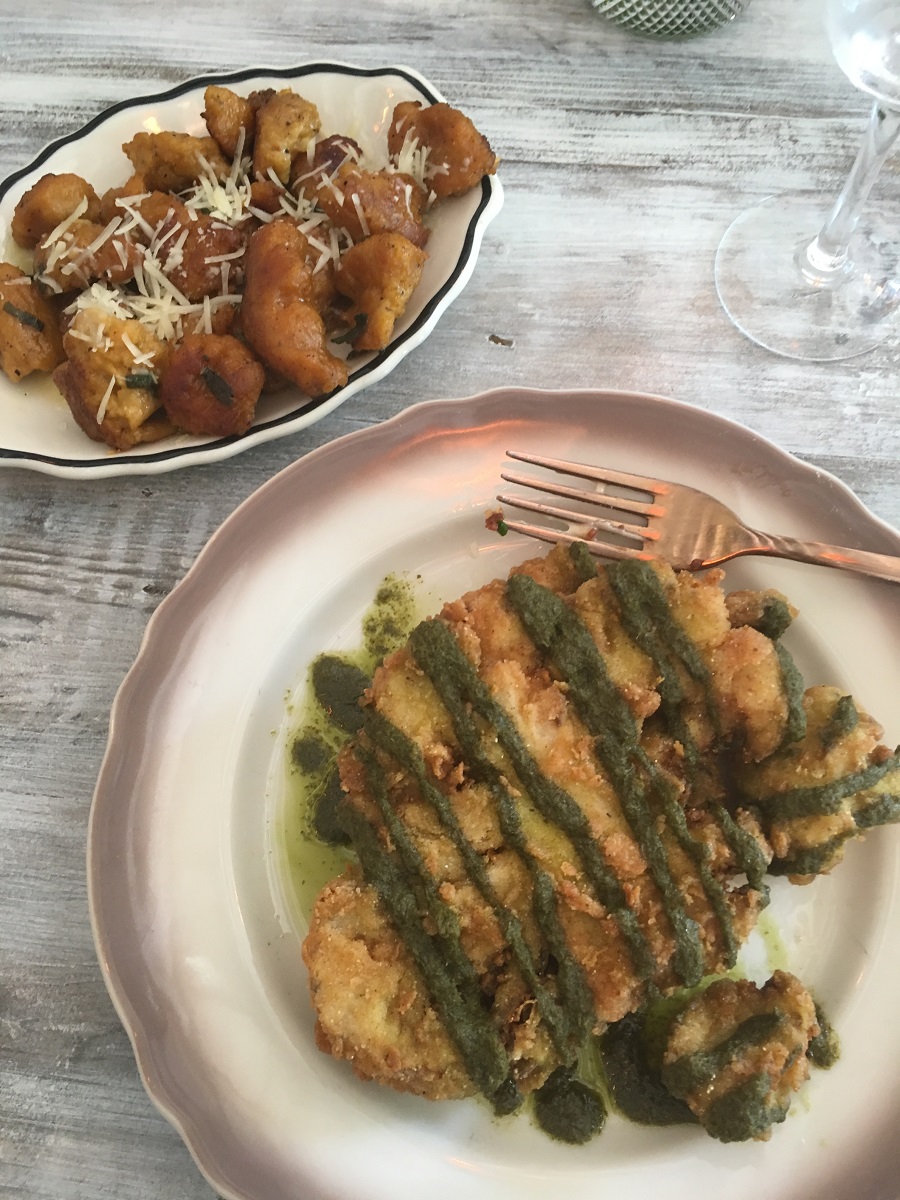 From there, some other friends joined us and we hit up a local brewery. We played some corn hole outside but it was HOT, so we migrated inside. After hanging out for a few hours, we decided to head back to our area for dinner. We ate dinner at one of my favorite restaurants, Kindred, in downtown Davidson. 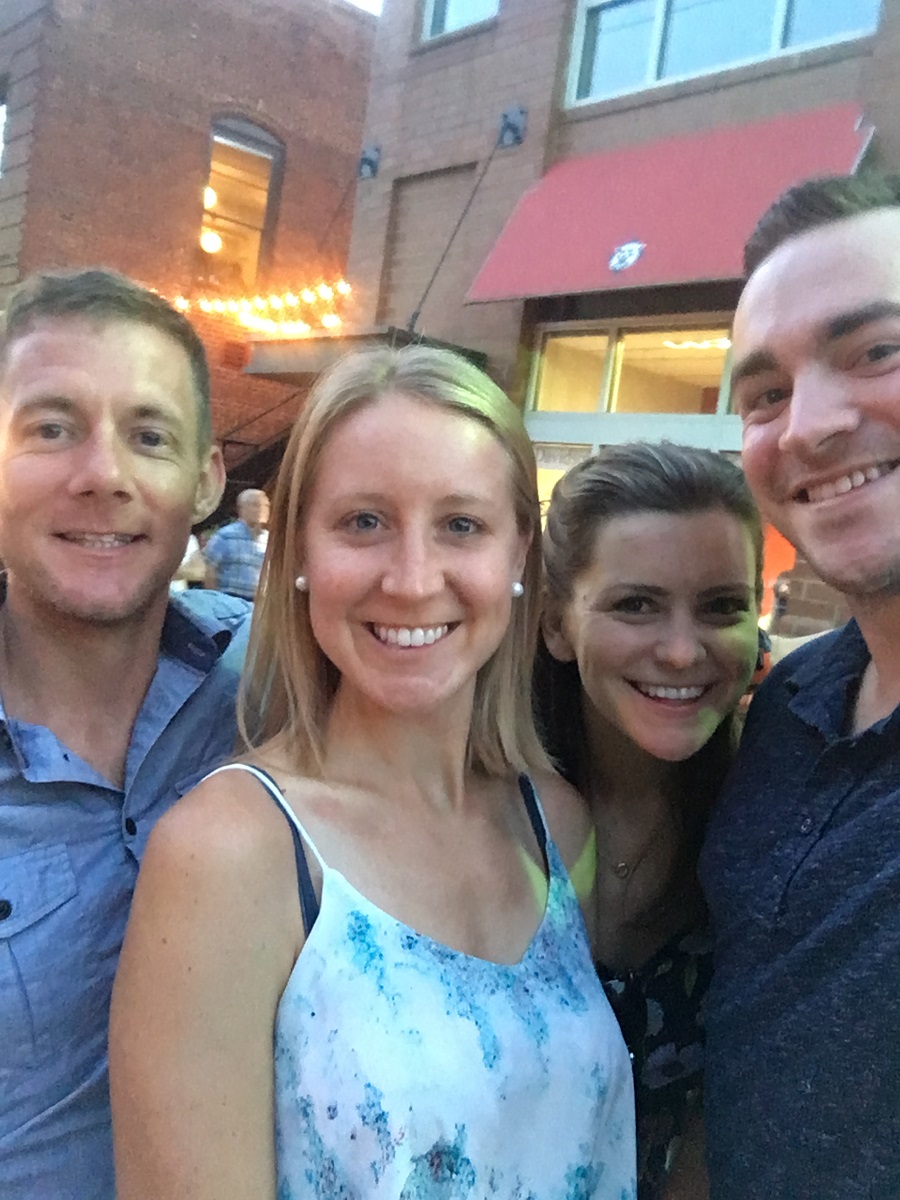 The group started with the milk bread, which is extremely addicting. Like seriously, if I could eat this everyday I would. The sea salt on top is just so dang addicting. 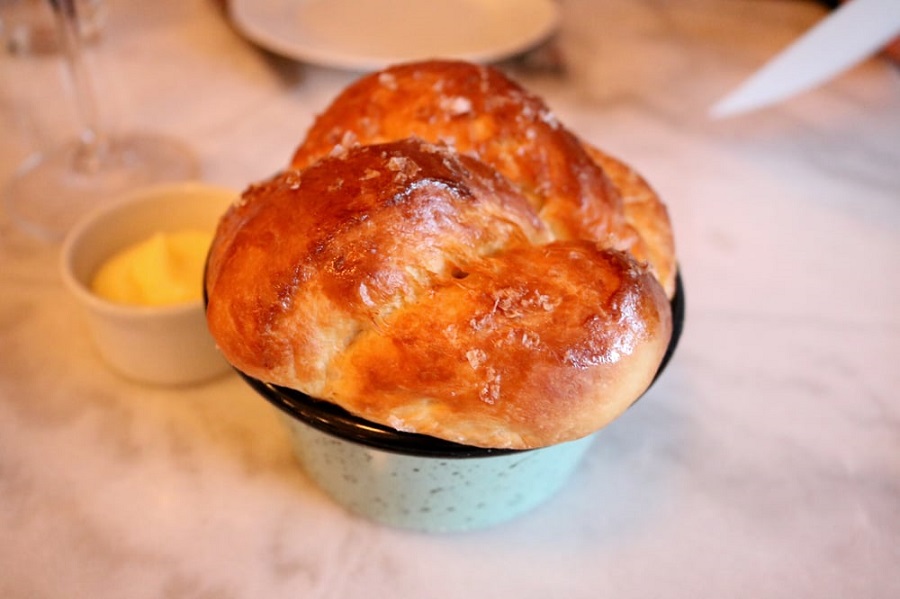 Ed and I split the black squid ink pasta and the scallops (no photos, sorry!). 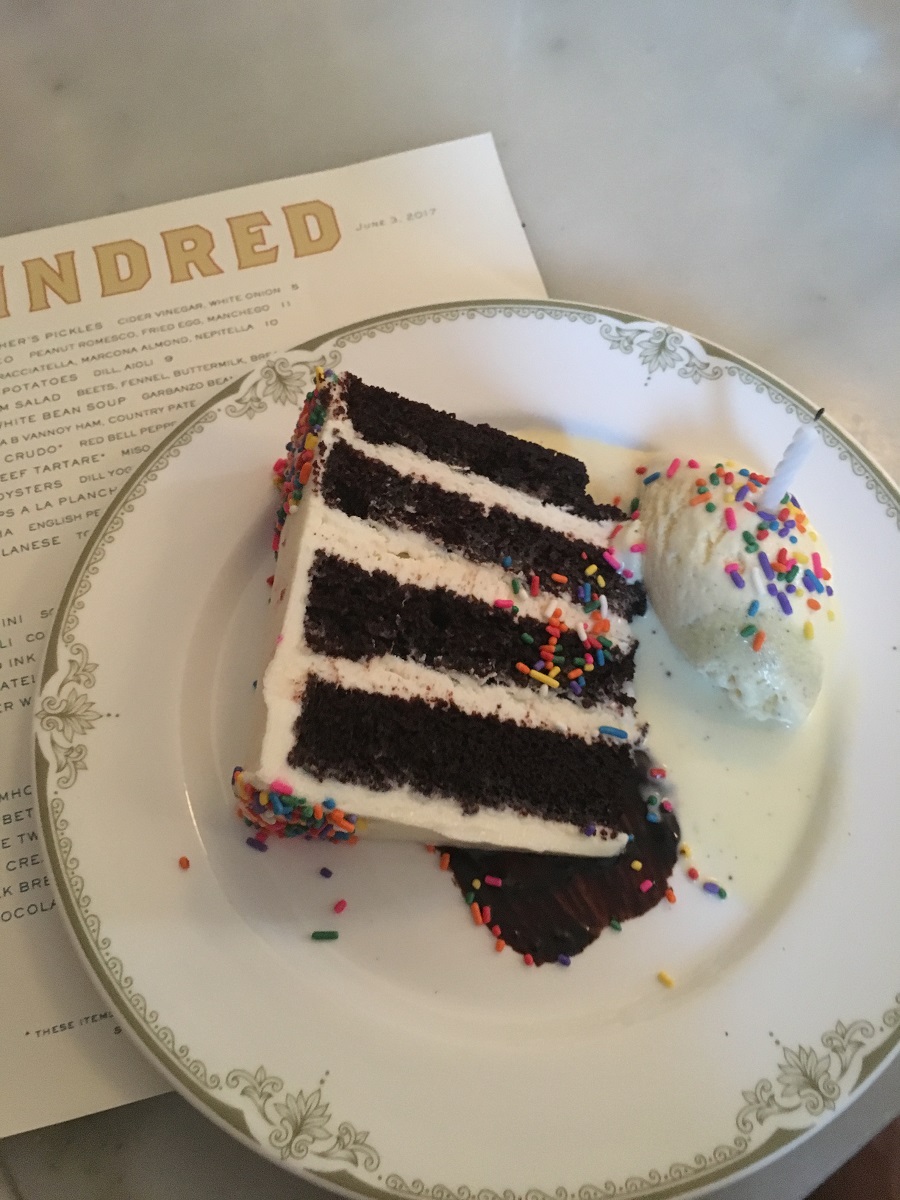 We walked around Davidson College for a little bit after before heading home. We made a little fire pit and were in bed by 10:30. We’re a wild crowd!

On Sunday, we took it easy and had some coffee on the back porch with Tater before heading down to Charlotte and grabbing brunch at Seventh Street Market. 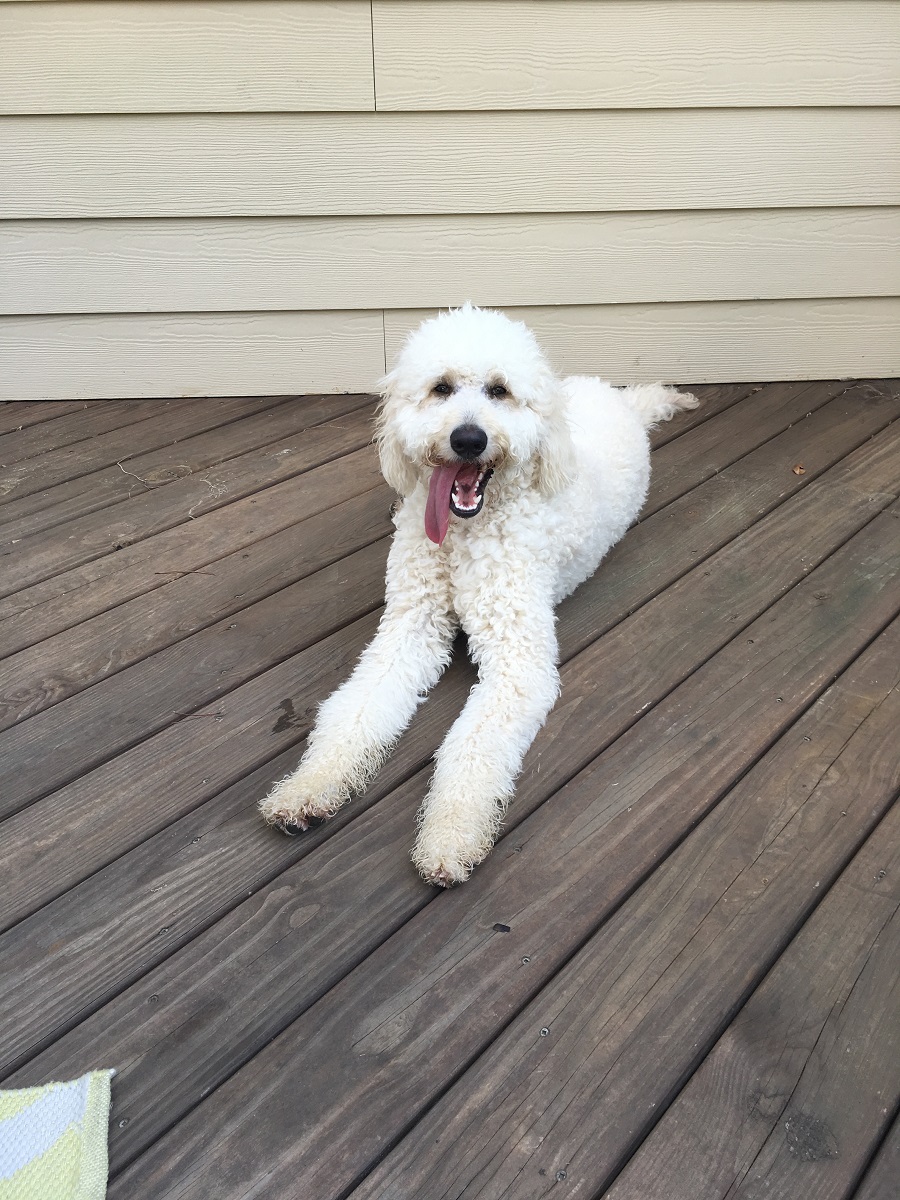 The market is my favorite place because there are so many options to choose from – acai bowls, crepes, sandwiches, pancakes, salads, etc. We each grabbed something different and enjoyed the food outside.

After that, we showed our visitors around a little bit before heading to the lake for some water fun. We did some paddle boarding and tubing on the lake. My arms were so sore on Monday from tubing. Don’t underestimate the amount of strength it takes to hold on! 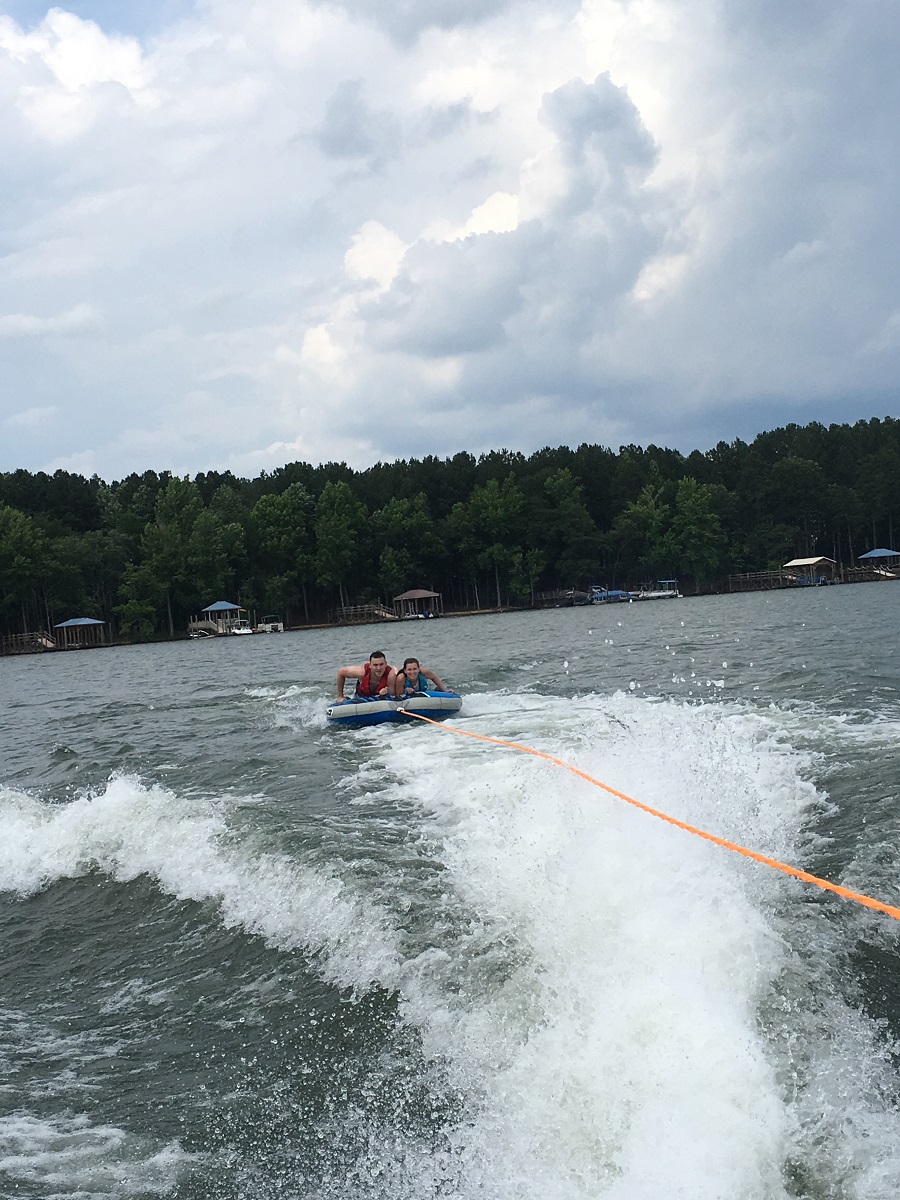 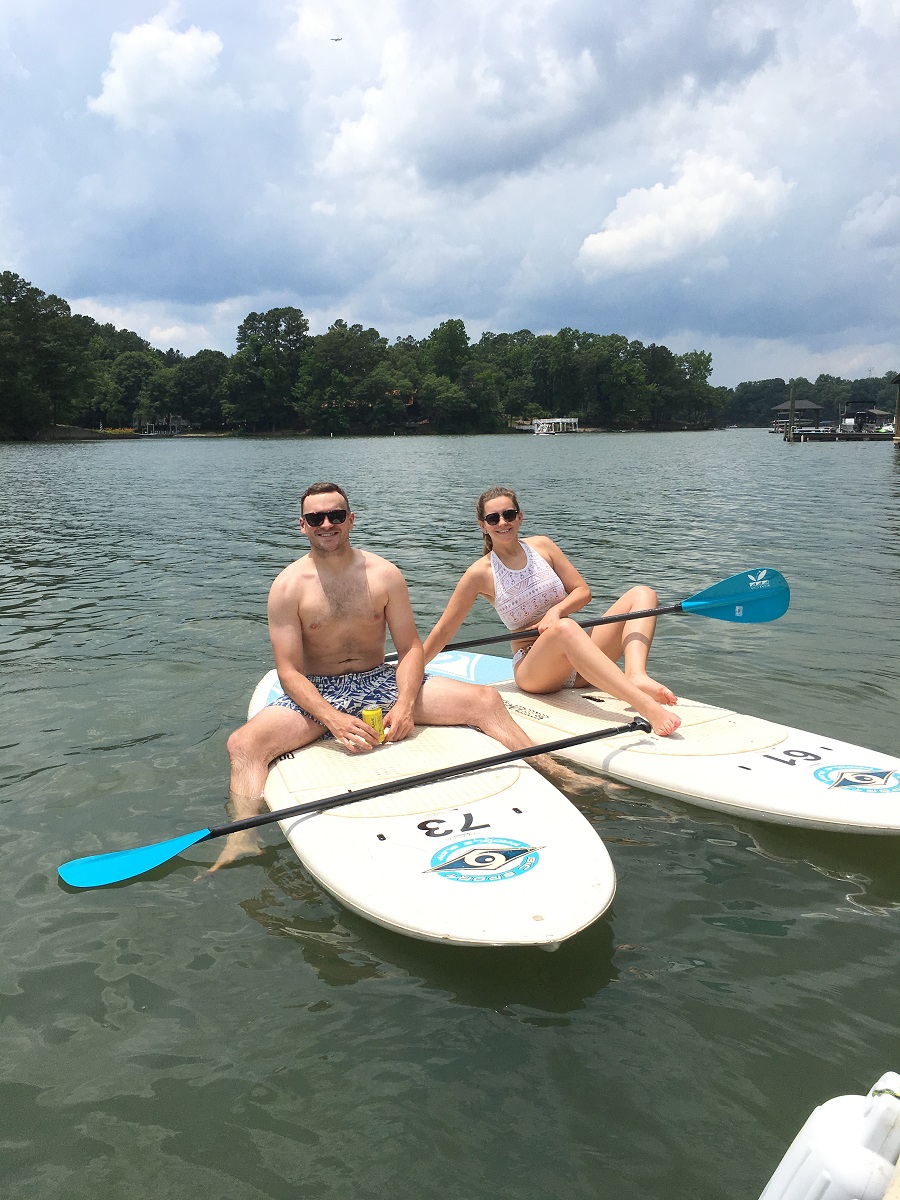 Sadly, we had to take our visitors to the airport later that afternoon. We got a call later that night that their flight had been delayed and later cancelled. So, it turned out that they stayed with us for one more night before flying out Monday morning.

It felt like we were eating all weekend, which is pretty typical! Food is the best way to explore a city and/or share it with others.

What do you do when people come to visit?

Have you ever been tubing?

19 responses to “Weekend Excursions and Eats”