I hope you had a great weekend! Cam and I went to a Sweet Feet meeting on Saturday, which is a team of runners around the state who will be representing NC Sweet Potatoes!

If you guys remember, I developed some recipes for them earlier this year and many of them are runner friendly. So, we got to eat them at the training day! These are the sweet potato coconut ginger energy bites + sweet potato blueberry baked oatmeal. 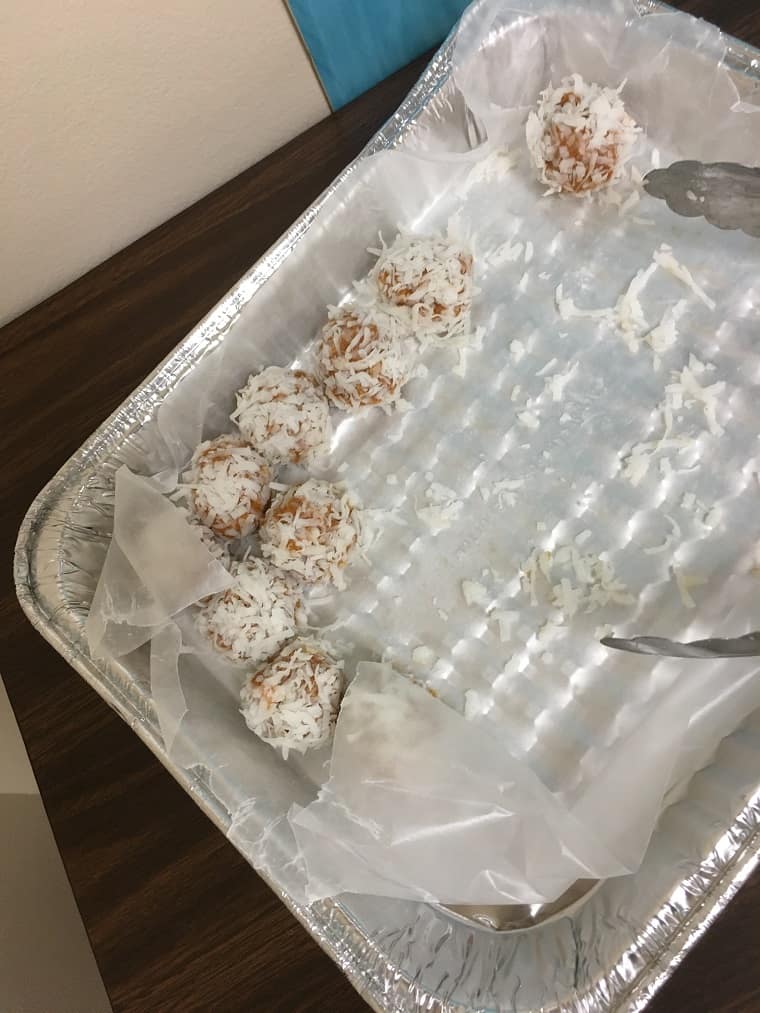 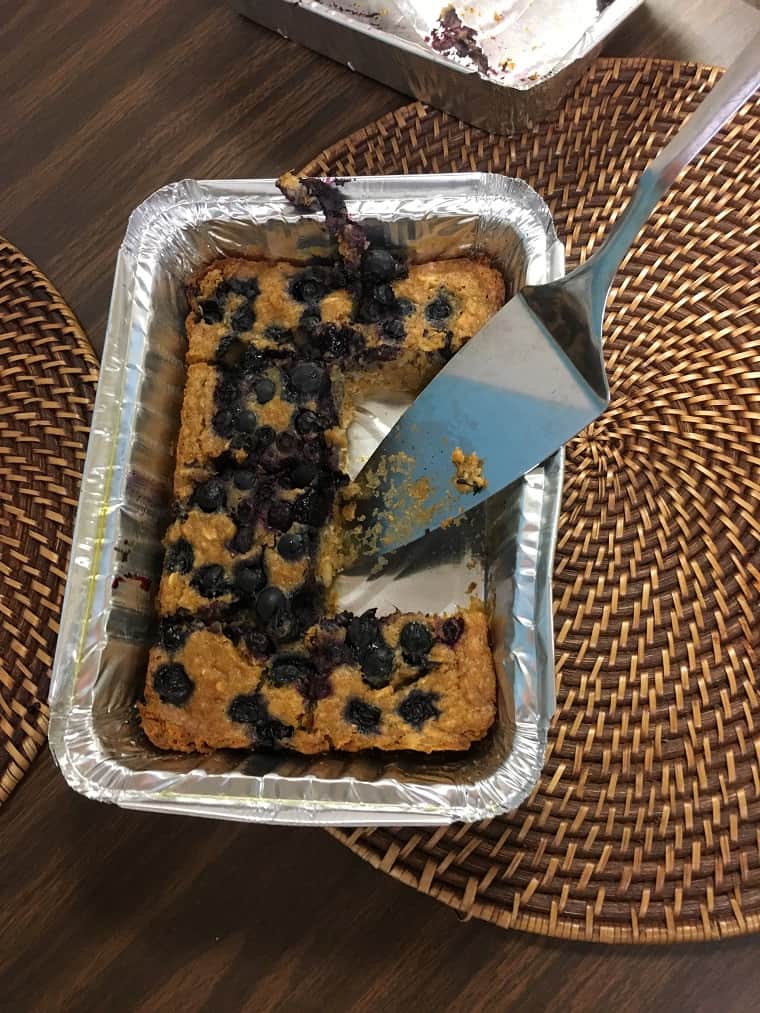 We also did a scavenger hunt of finding sweet potato signs around the city, went over some logistics, and I got to meet the other team members.

Then, we toured a sweet potato packing facility (where they store them before cleaning and sending them to the grocery store) and the farm where they grew them! 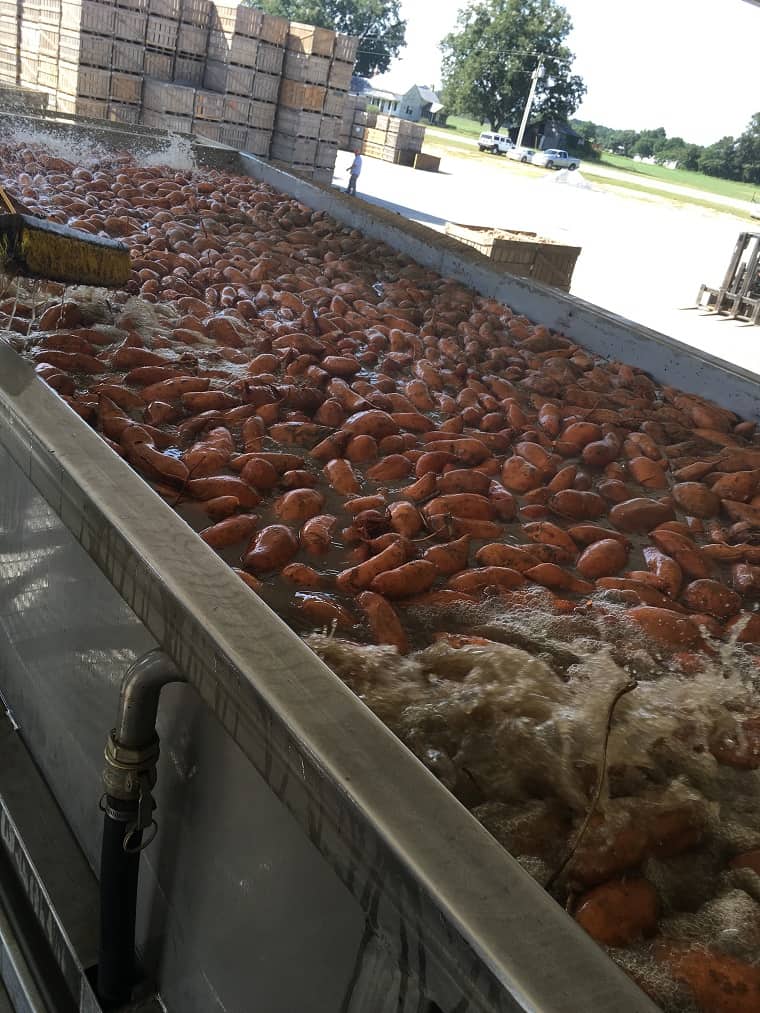 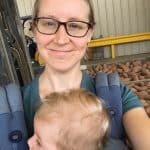 On Sunday, I went for a 5 mile run in the cooler morning weather (I LOVED it!), then did some grocery shopping and meal prep. I thought it’d be fun to show you guys what I prepped this week, in just a few hours time.

I feel so good knowing I won’t really have to cook much this week. I’m a huge fan of meal prep, but I’m very inconsistent with it. But, I KNOW how much easier it makes my life, especially with a newborn. There just isn’t enough time at night to cook dinner, clean up, hang out with Cam, blog, etc.

I really have no idea how to do it all and some days I just feel like a complete mess.

I based my grocery list off of these recipes. I tried to pick recipes to use up a lot of what I had (i.e. lentils). I only spent $54 on groceries this week since I had the majority of what I used. This is actually another motivator to meal plan, because I know I’ll save so much $$.

Anyway… Here are the recipes I chose for the week. I’ve been really craving some spaghetti squash so that went on the menu.

BBQ Lentil Sloppy Joes. I don’t have a pressure cooker, so I just made them on the stove. I love the flavor. I think I’ll be throwing these on salads, pasta..everything..in the future! 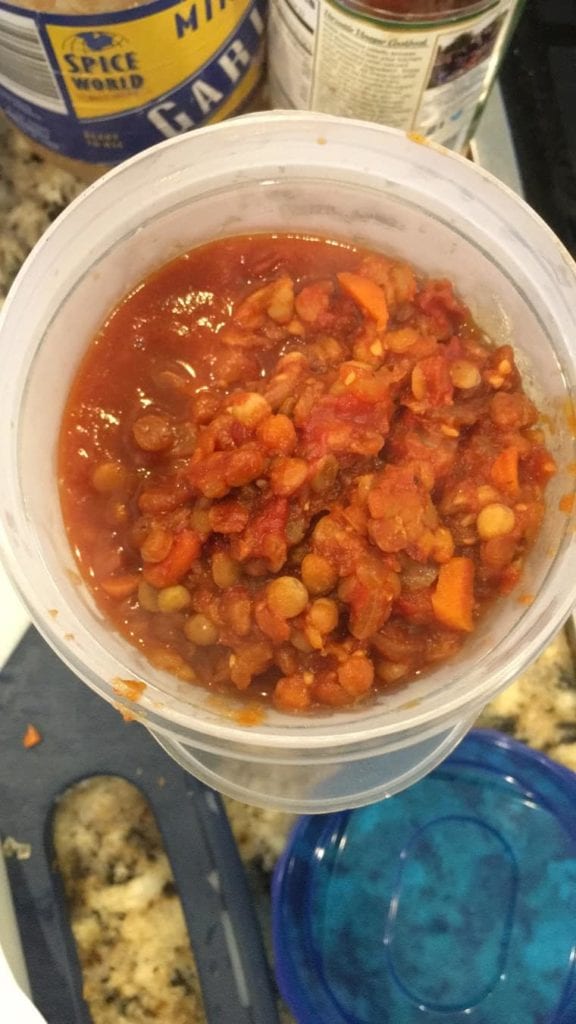 Taco Stuffed Spaghetti Squash Boats. I was going to use my recipe, but I forgot to buy canned artichokes. It was good to try something new! Plenty of extra stuffing too. 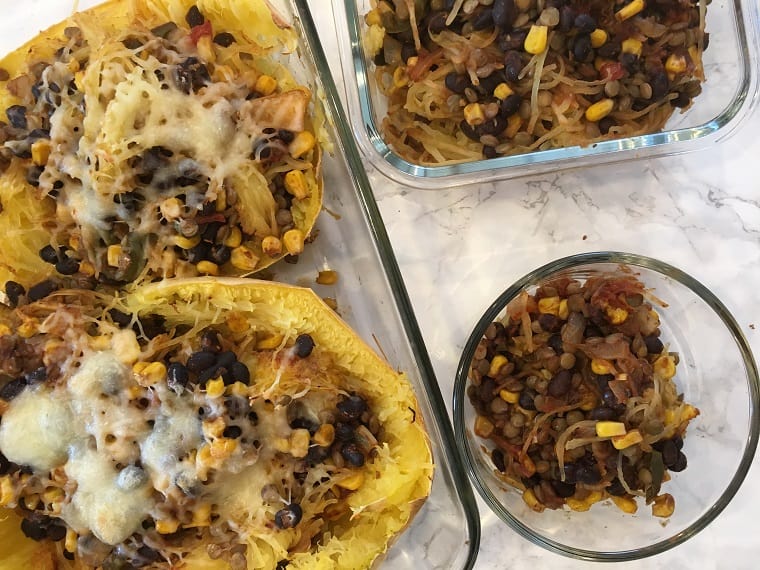 Turkey Burgers + Alexia Sweet Potato Fries. I already had both of these. 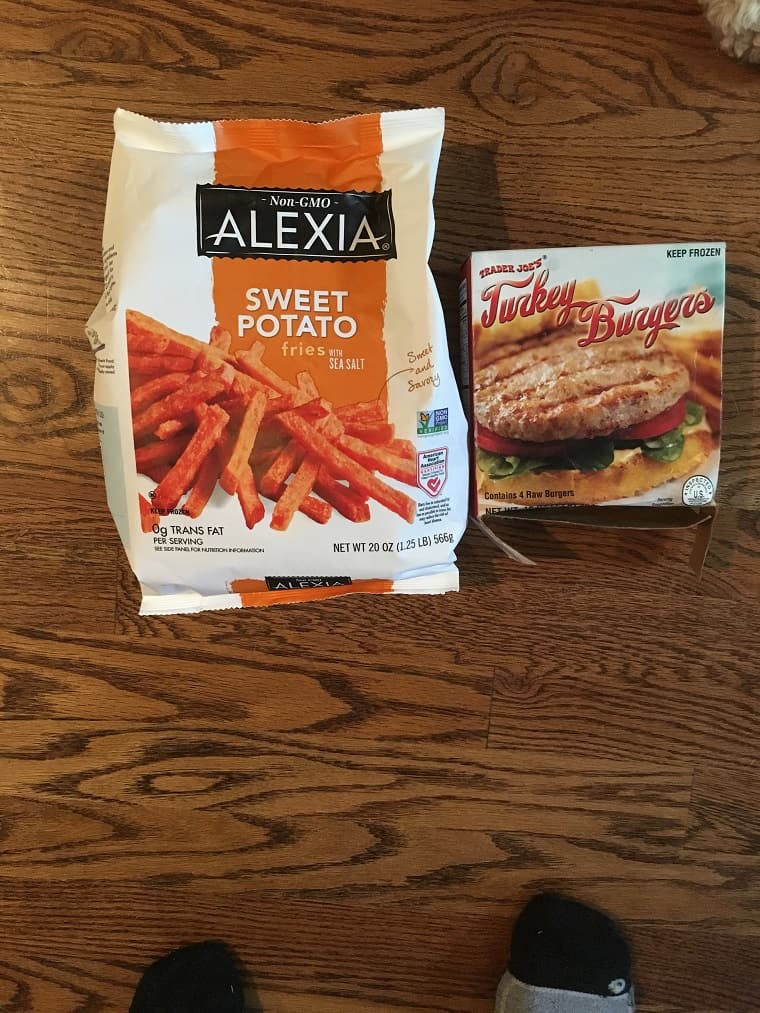 Planning on leftovers this day or maybe grabbing dinner with a girlfriend.

Tahini Brownies – I made these Saturday night and they were gone by Sunday afternoon. Definitely recommend, especially paired with oreo ice cream. 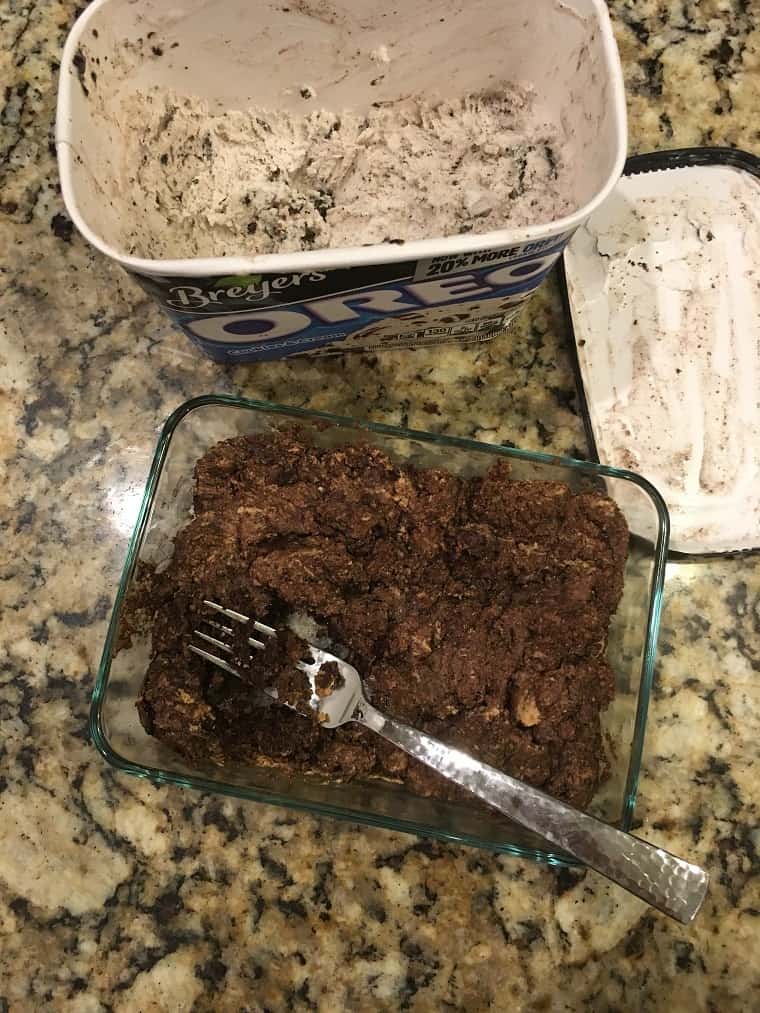 Pumpkin Cookies – I made these and wasn’t super crazy about the texture, so gave them to Ed to snack on while driving lol. I’m more of a hearty (regular flour) kinda girl for my cookies.

Chocolate Lentil Bars – These are nice and chewy! These will be perfect to just eat before client sessions or snack on in the car. The times I’m most mindless is when I’m snacking because the breastfeeding hunger will just come on all of a sudden and I need something quick. I haven’t been great at having prepared snack options, so this week I changed that. Between these and the muffins (and the fruit/string cheese I bought), I should be good. 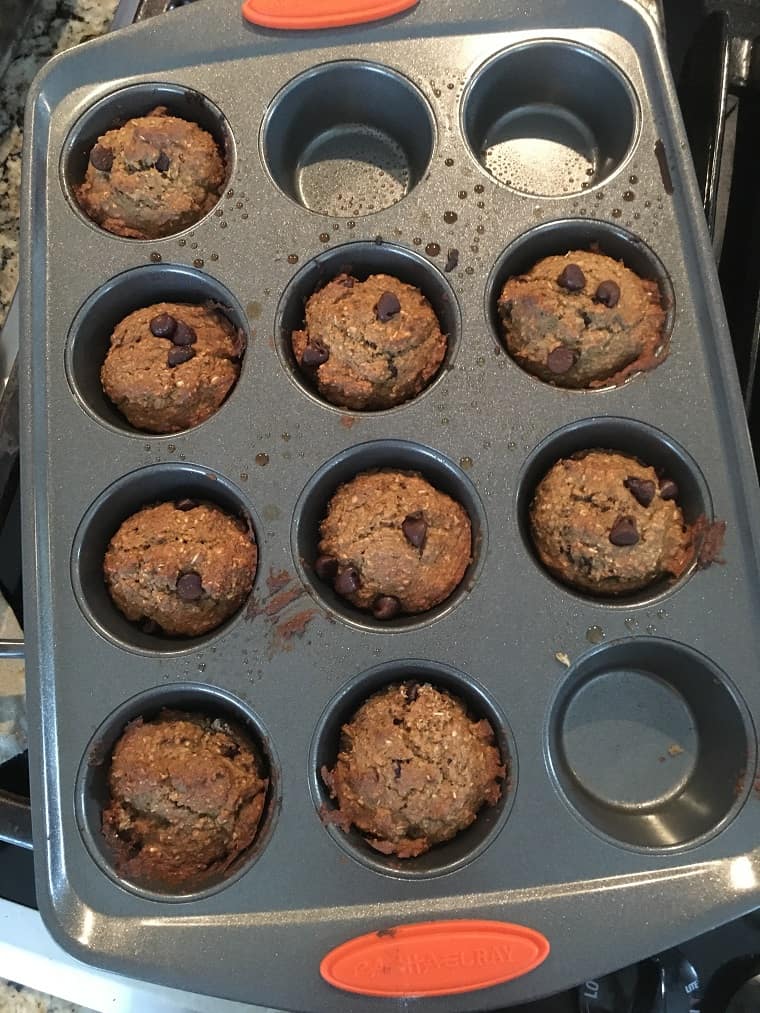 I actually made the lentils earlier on Sunday – super easy. Boiled them for a few minutes and then just let them sit. While they were sitting, I drove to the grocery store to pick up on my online grocery order (still milkin’ this – I may never grocery shop again! Lol).

When I came home, I unloaded groceries and had cooked lentils for the recipes. So, I first mixed the chocolate lentil bars in the blender and threw those in the oven.

While those were baking, I microwaved the spaghetti squash (a super easy way to cook it – see here if you’re curious), and in a pot, started the ingredients for the BBQ lentil sauce. In a pan, I also started sauteeing onions, pepper, beans, corn and spices for the spaghetti squash stuffing mixture.

Once the lentil bars were done baking, I separated the squash from the seeds and finished sauteeing the stuffing for the squash. I threw the stuffing back in the squash, topped it with cheese and baked it for 10 more minutes.

While that was baking, I checked on the BBQ lentil sauce, and mixed in the already cooked lentils, and let that start to cool. Then, I started mixing the batter for the banana lentil muffins.

I was going to sautee from zucchini and mushrooms that I bought as well, but I got a little sidetracked and that will have to wait until tonight or tomorrow night. 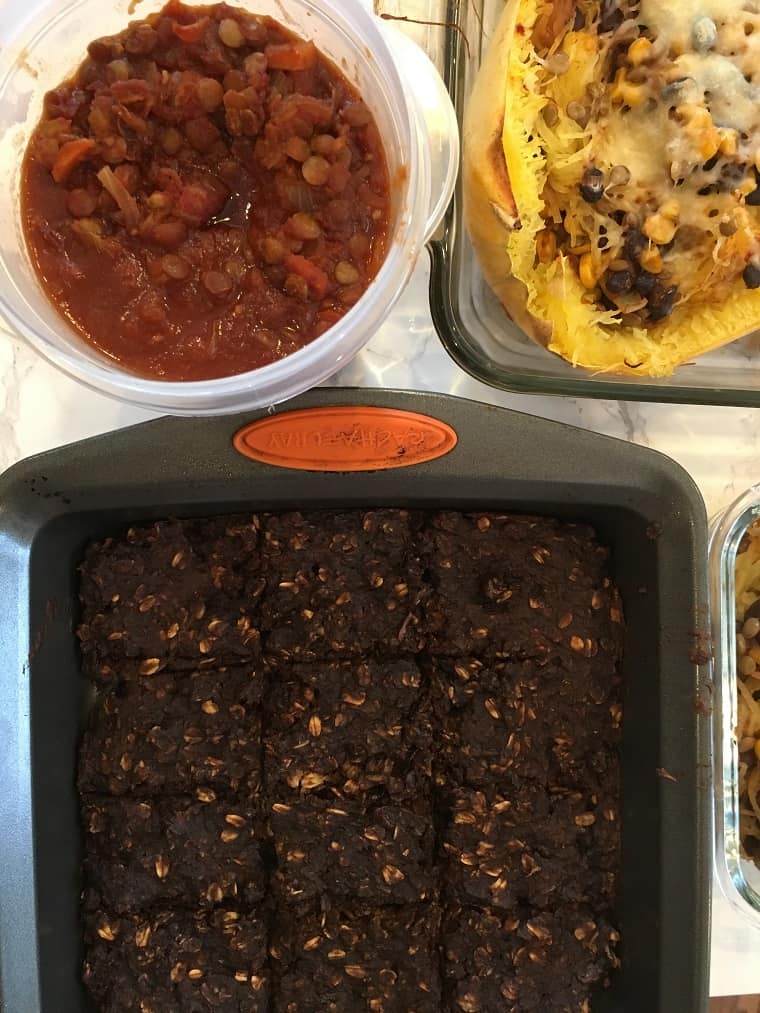 I now feel like I have a much clearer head going into this week. And it’s such a relief to not have to worry about dinner. For lunches, I’ll probably do a combination of leftovers and turkey sandwiches.

I bought turkey, some fruit, milk, yogurt, nuts, cheese, veggies and dark chocolate at the grocery store. So, that’s where the rest of my money went.

Do you meal prep consistently or just wing it?