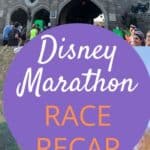 Well you guys, the Disney Marathon 2020 is gone and behind me now. And while I had some trepidation and uncertainty going into it as I wrote about here, I think the end result, my first DNF, was warranted and what was best for the situation.

Disney marathon weekend is a HUGE deal so first, let’s talk about it.

How Many Races Are In Disney Marathon Weekend?

So, as for years past, the Walt Disney marathon is the culmination of Disney Marathon Weekend, which is on Sunday. But, the festivities start on Thursday with the 5k. Then, they host the Disney 10k on Friday and Disney Half Marathon on Saturday. All of those sound insane to me! You would really have to love Disney and running to enter them.

As you guys know, I was signed up for the Disney World Marathon 2020 on Sunday, BUT I was pretty burned out from running the Detroit Free Press Marathon 2.5 months earlier. So, my training and motivation suffered and waned. I tried to switch to the Disney World Half Marathon, but they denied me 🙁

Okay, now for the fun details for you if you ever plan on running the Disney Marathon.

The Expo starts on Thursday, so after landing, we headed there to pick up my bib. Didn’t stick around for long because Cam needed a nap and I needed lunch! What Time Does the Disney World Marathon Start?

They want you there by 3:30am to prevent back up of corrales and ensuring enough time to get to the start line.

Yes, you read that right. I believe the 2019 Disney World Marathon and other past ones started at 5:30, but they changed the beginning of the course this year in Epcot. So, my wakeup call was at 3:00am.

We stayed about 10 miles away in a big house. Ed was a trooper who dropped me off at 4am. but even then, we sat in 15-20 minutes of bumper-to-bumper traffic trying to get to the marathon drop off area in Epcot. Not to mention, we were looking at some warm weather and humidity for the race!

The Disney Marathon corral start times was supposed to start right at 5, but this year, so many people were backed up and buses were late that they moved the starting time back to 5:15am.

Here’s a glamorous photo of the parking lots you start in. SO MANY PEOPLE.

I happened to be in the last corral (my own fault for not uploading my Detroit time into the system), so I actually didn’t get started until 5:45am. It was annoying just standing there for like an hour after getting there around 4:15am.

Where Does The Race Start and Finish?

The Disney Marathon starts and finishes in Epcot.

Deciding where to stay in Disney is very intimidating, but if you’re running a Disney race, I would recommend staying at a Disney resort because you get some race advantages and it will make your Disney vacation planner that much easier.

You will most likely be close to the marathon start/finish and those who stay at Disney resorts get free drop off/pick up, which is so convenient.

Plus, you’ll probably meet other runners on your buses.

Pros/Cons About Running the Disney Marathon

I was oscillating all weekend about whether I should even run the race or just scrap it. My reasoning for running it was warranted by: But, I also had some reasons to run it:

Ultimately, I decided to run it even though I realized I would be starting in the last corral. I forgot to upload my Detroit Marathon time.

Note: You don’t need a time to register but by October, if you have a recent marathon time, upload it so you get in an earlier corral. Disney does not remind you to do so.

So, miles 1-5 are actually kind of boring lol. So, you start in the pitch black dark in the parking lots in Epcot. We got into Epcot around mile 2-3, but it was only for a half mile or so.

We ran through Mexico and there was a cute band playing music. Then, it was back to roads and parking lots to get to Magic Kingdom.

I didn’t realize how much “road” running there would be, as I thought the majority would be running through parks, but it wasn’t like that.

There were some bands playing on the roads and some cheer sections and characters, but for the most part, it was just us runners!

I did notice there were TONS of runners utilizing the Jeff Galloway method of walking/running. You could hear their beeps. I actually thought about joining in to not overexert myself. More road running until we started to enter Magic Kingdom, between miles 9-10. This was by far my favorite part of the race. Entering Magic Kingdom was so surreal, especially since I had been there the day prior when it was packed and crowded. Now, it was just us runners and certain staff members who were out there cheering us on. We ran under the famous and iconic Cinderella Castle. It really did feel magical.

Everyone is just so excited and happy during this race, which is a huge plus. I actually enjoyed having less pressure and just “enjoying” the race. The recap stops here because I decided to stop just before mile 13. While I do feel a little bummed I didn’t make it all the way, I honestly don’t feel as torn up about it as I thought I would.

I think this is because I knew it was the best choice for me in the moment, and my health/safety has to be the #1 concern, like I tell my clients.

At around mile 11, I found a tent and asked about the protocol for dropping off. At this point, my hip was starting to feel uncomfortable and I didn’t want to do more damage. If you remember, I had been experiencing some intermittent hip pain in the weeks leading up to the race.

I checked in with the medical team at the tent, telling them I felt perfectly fine, but was having some slight hip pain and wanted to stop. They said that I could hang out there but it could be upwards of an hour before the van would come to take me to the finish. And the van has spots for 15 people, so if I was the first person, I’d have to wait for 14 more. That sounded like it would take forever.

I decided I would walk/run at this point, and was trying to coordinate with Ed where he could pick me up.

I saw Pluto and had to take a picture with him, which happened to be in front of a very nice Disney resort (Grand Floridian) that had a monorail. So, I decided to exit the race at that point and hop on the monorail to the Magic Kingdom parking lot, where Ed was waiting.

I don’t think this was proper protocol for exiting a race, but the other alternative would have taken hours.

I am sad that I did not finish what I started with the Disney marathon, but it hasn’t broke me. There was so much other stuff going on that weekend with my family there and Cam’s first Disney experience that helped distract me.

Right now, I’m having some soreness is my left hip/hamstring area, that I know would feel so much worse if I had “fought” through the pain. So, I’m glad I stopped when I did.

Of course, not getting a medal and finishing my 4th marathon is a small blow to my ego, but in the scheme of things, I know I made the right decision for me in the moment.

Had Disney let me switch to the half, all would have been ok 😉

Sarah Schlichter is a Registered Dietitian with a Master’s in Public Health Nutrition. She specializes in sports nutrition and intuitive eating, and recipe development. She also co-hosts the podcast, Nail Your Nutrition.
4 Comments
Join The Conversation