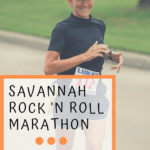 I can’t wait to share more thoughts about my first marathon last weekend at the Rock and Roll Marathon Savannah. I also plan on recapping my nutrition strategies for you! And, I even have a short video at the end if you make it that far.  🙂

Sorry, this is a long one with lots of words, but I write this in hopes of helping anyone who may run a marathon someday, or specifically the rock and roll marathon savannah.

I learned more than 26 lessons from my first marathon.

As you may know, I ran the Rock and Roll Marathon Savannah last Saturday.

So I’m going to tell you all about it and fill you in on the details for my first marathon. Buckle up – it’s a long one.

When is The Rock and Roll Savannah Marathon?

With the race on Saturday, we arrived on Thursday. I wanted Friday to be pretty low key and casual, and didn’t want to feel rushed. I actually spent most of the day on my feet Friday, which was something I DIDN’T plan on doing, but it all turned out okay!

We went to the expo to pick up my bib and just spent some time scanning everything. I have never done a Rock and Roll race before, but have heard great things.

Clearly, I was very excited to run the Savannah Marathon.

While I used to be nervous and freaked out about the distance, I was actually pretty excited to run the 26.2. I was mentally and physically prepared for the marathon.

This video made me laugh a little before the race. 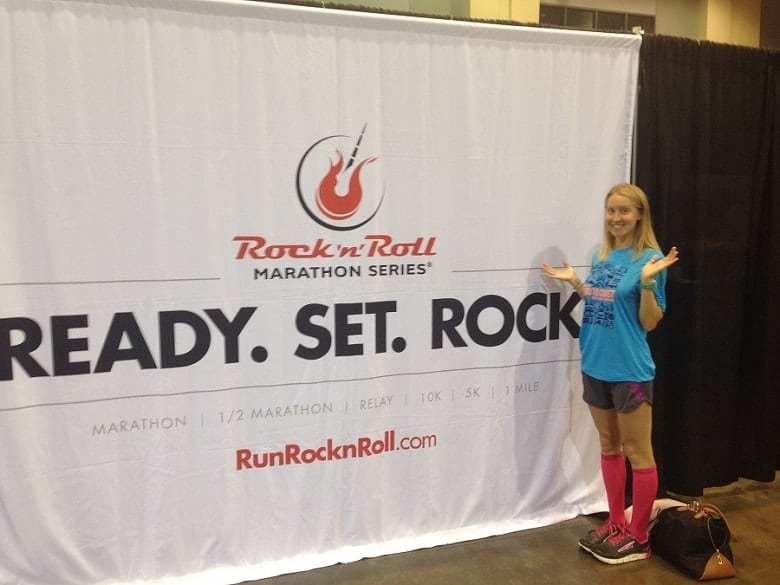 Saturday morning (race day) started early. We got up at 4 am and I had my typical pre-race breakfast, some coffee, water with nuun, and oatmeal with peanut butter, yogurt and fruit. I prefer this peanut butter because it’s simple on the stomach.

If you want more on my marathon nutrition plan, that post goes into much more depth. 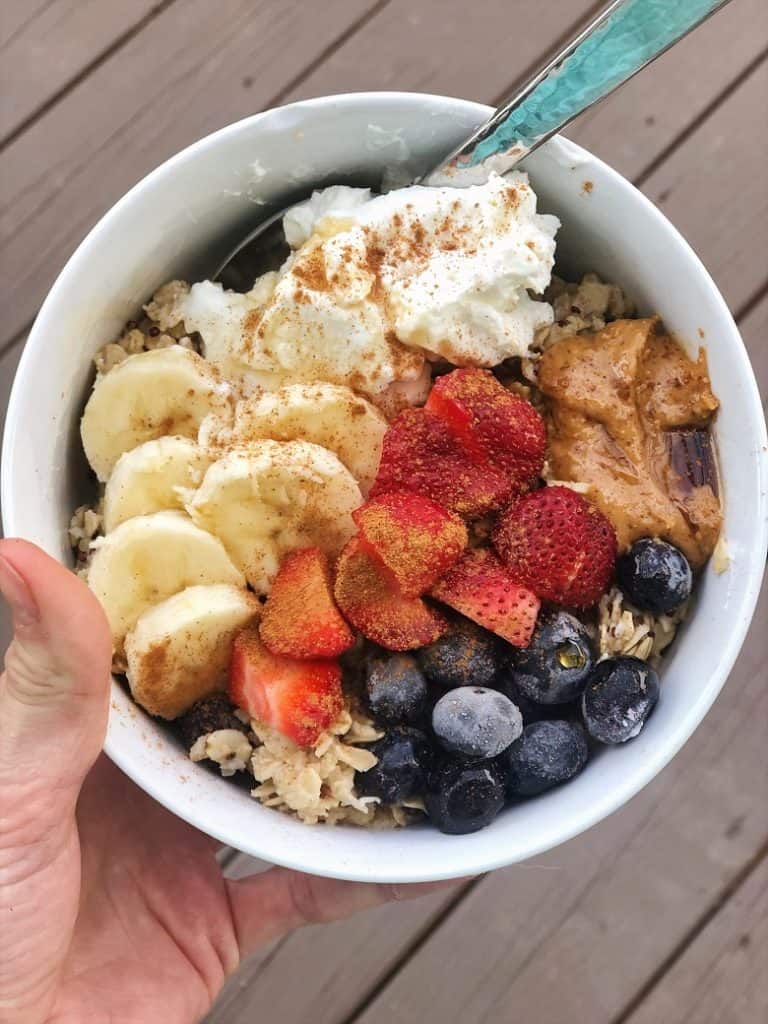 We were parked by 5:45 and started walking the mile to the starting line. I wanted to conserve as much energy as possible, so we walked slowly. It was chilly! I had a long sleeve shirt and long pants on.

Once I went to bag drop, I put the pants in my bag, but kept the ratty long sleeved shirt, which I ended up ditching at mile 3.

Here are some cheap long-sleeved shirts if you don’t have any. Highly recommend grabbing some before the race so you don’t end up giving away an expensive piece of tech wear.

The Starting Line at the Savannah Marathon 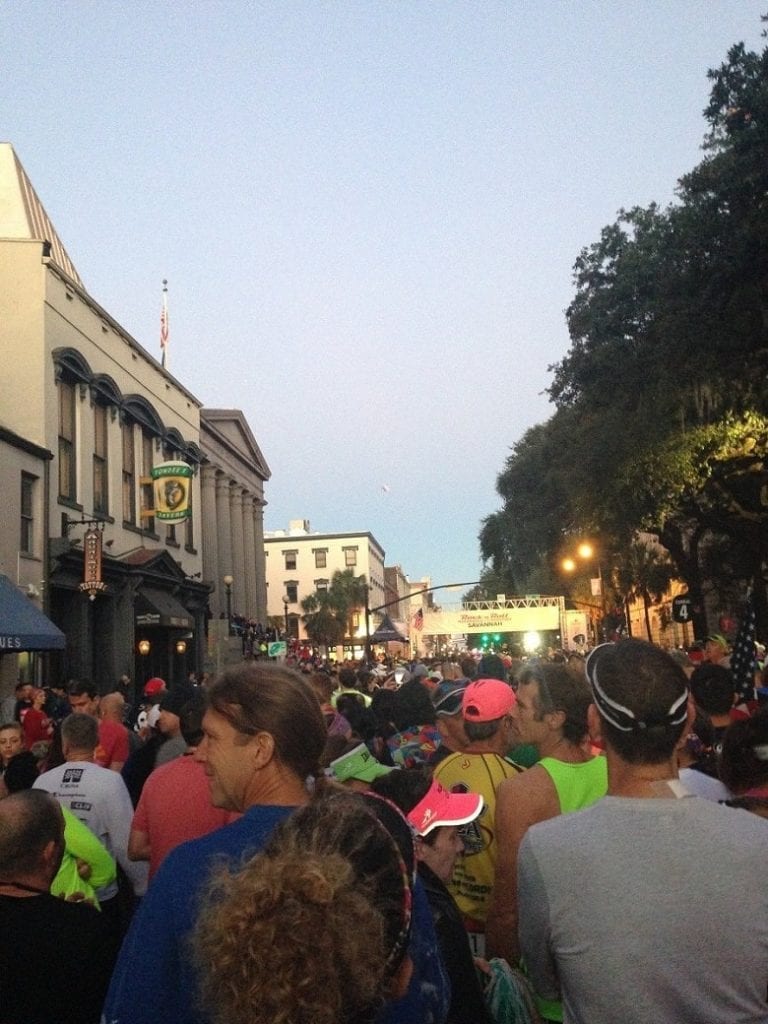 It was certainly an exciting atmosphere. I was actually really hungry before the race started, so I opened my first Huma gel and had half of it (the pomegranate is my favorite flavor).

Numerous people had told me to start slow, and Ed reiterated it. He told me not to run faster than 9 minute mile pace for my first 2-3 miles, then I could speed up a little bit depending on feeling.

I stuck to the plan, which set me up well. I felt really good for the majority of the race!

My pace started to slightly increase after mile 3.

Despite being overly excited, I kept reminding myself that I had SO LONG to go.

So, I just did what felt natural.

At this point, I continued to feel good. I finished my 2nd full huma gel. Though I wasn’t “hungry,” I had been taking bites every mile or to prevent myself from getting hungry or depleted at any point.

I also planned my huma gels before a water stop was coming up, so then I could wash it down with water.

I also kept my own water bottle with tailwind in it, which also provided me with calories, carbohydrates and sodium.

Another key player I couldn’t have gone without! 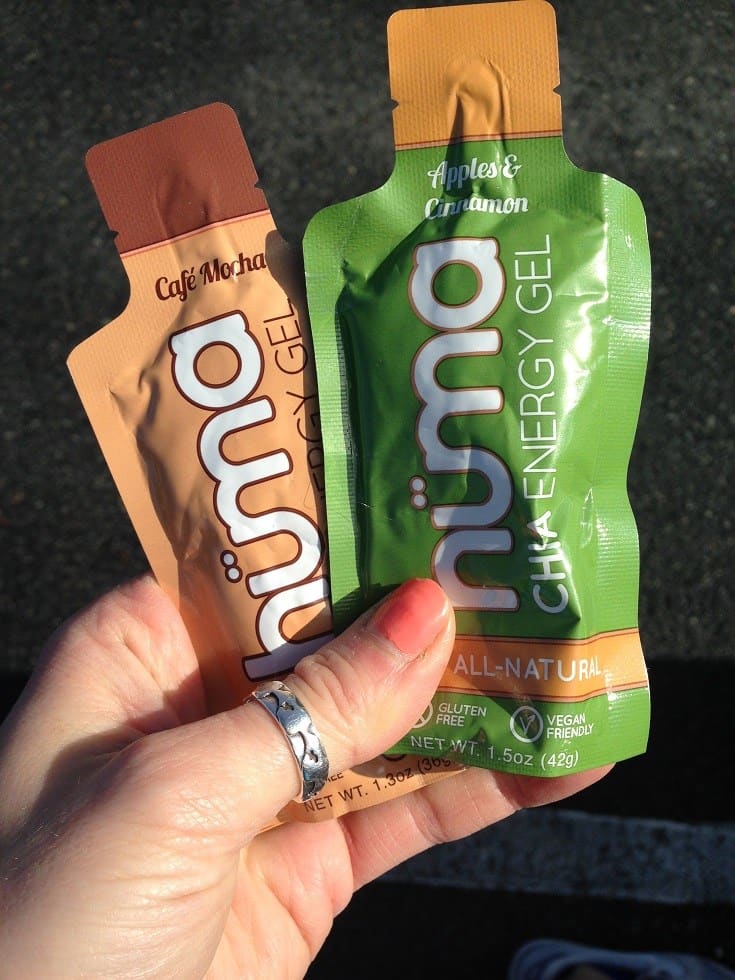 I grabbed some water from every water stop and I think that really helped. You want to make sure you don’t fall behind on your water intake. Hydration for running in the heat is essential.

If that happens, you can’t catch up and your performance will suffer. So it really worked for me to have a sip or two at each stop alongside a swallow or two of gel.

I was finding my groove, as I expected. Once I got out of the large crowd and masses, I knew I was running my race.

The race would start to split at the half mark, so I kept telling myself to make sure I still had a lot left at that point.

It can be really depressing to reach the halfway mark, see people finishing, and know that you still have a couple hours of running left.

The half marathoners stayed straight to finish, while the full looped left on the Harry Truman Parkway.

Miles 12-14 were pretty bland because we were just on the freeway. I think there was maybe one band, but there were none to very little spectators, and nothing to look out.

Honestly, I’m not sure why they included this in the race. It was pretty boring, and would be even more brutal on the way back.  My half marathon time point was right around 1:51.56.

I was ahead of my goal pace, but tried not to freak out.

The course got a little bit better at these miles, as we turned into the Medical University Center and then went through Savannah State University. This was probably my favorite part.

The students were out cheering, the atmosphere was lively, and I had hope that the end was in site, and I was still feeling good.

We went through the campus and essentially did a big loop.

My shoulders were getting sore too, but I knew I had to keep powering through. My pace started to slow a tiny bit, but I was still feeling relatively good overall.

I knew I still had some miles left in me so I started relying on the “pump up” songs from my playlist. My focus was on the consistent fuel and water.

It was helping, because I realized that body was adapting to and using the carbs and water. 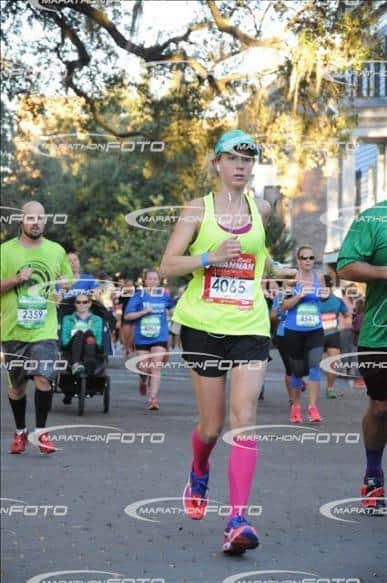 Essentially, we were back on the Harry Truman Freeway at this point. This was my least favorite part of the race.

There was a slight hill with mile 22. At this point, I was really hoping we’d get to the city streets soon because I needed some scenery and people cheering.

There was no crowd support or spectators at this point, and people were beginning to hit the wall at this point.

I started wondering when I would see Ed and my parents and I was starting to feel like I needed them. Ed had run the half (he finished 7th by the way!), and I knew he was tracking me on his phone, so I knew he would find me.

Just after mile 24, right before we headed off the highway, I saw him. He snapped this photo and started running alongside me and telling me what to expect for the remainder of the course. 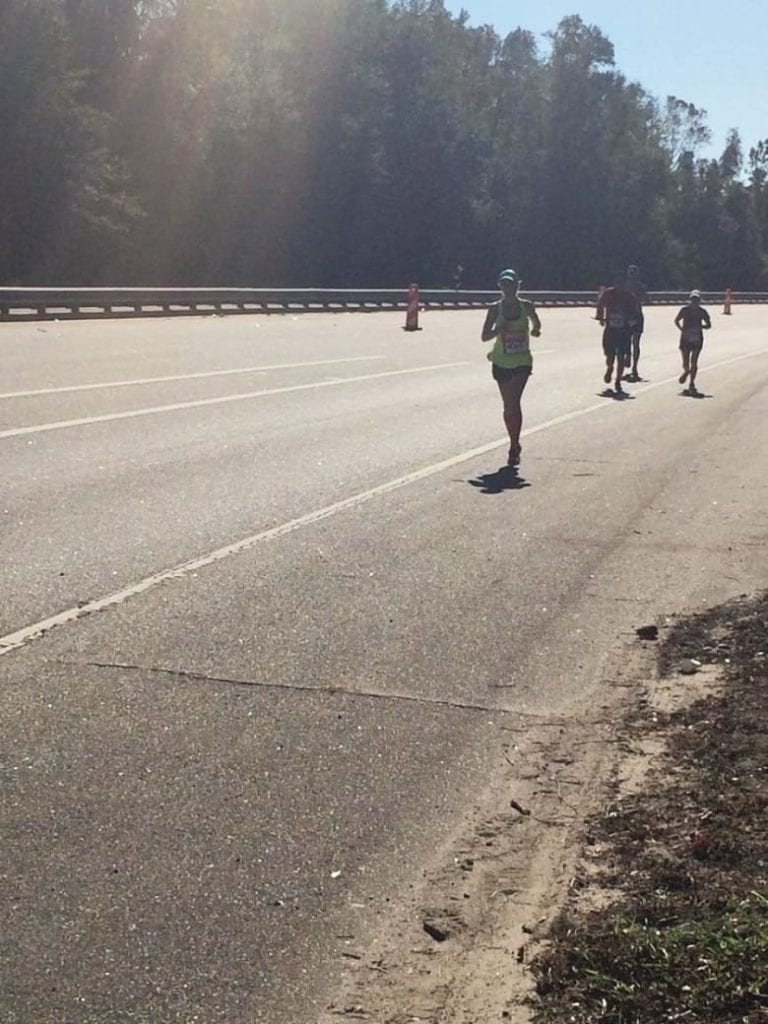 Ed was so encouraging, telling me how great I was doing. While I was encouraged that I was way ahead of my goal time and finish, I knew the last two miles would be the hardest yet.

Ed knew I was hurting but he kept reminding me to drop my arms and run relaxed. Lucky for me, he helped me navigate the half marathoners who were still on the course so I could pass them.

He told me my parents were waiting by the finish line when I asked if they had arrived.

Hearing that gave me the extra boost of motivation I needed. 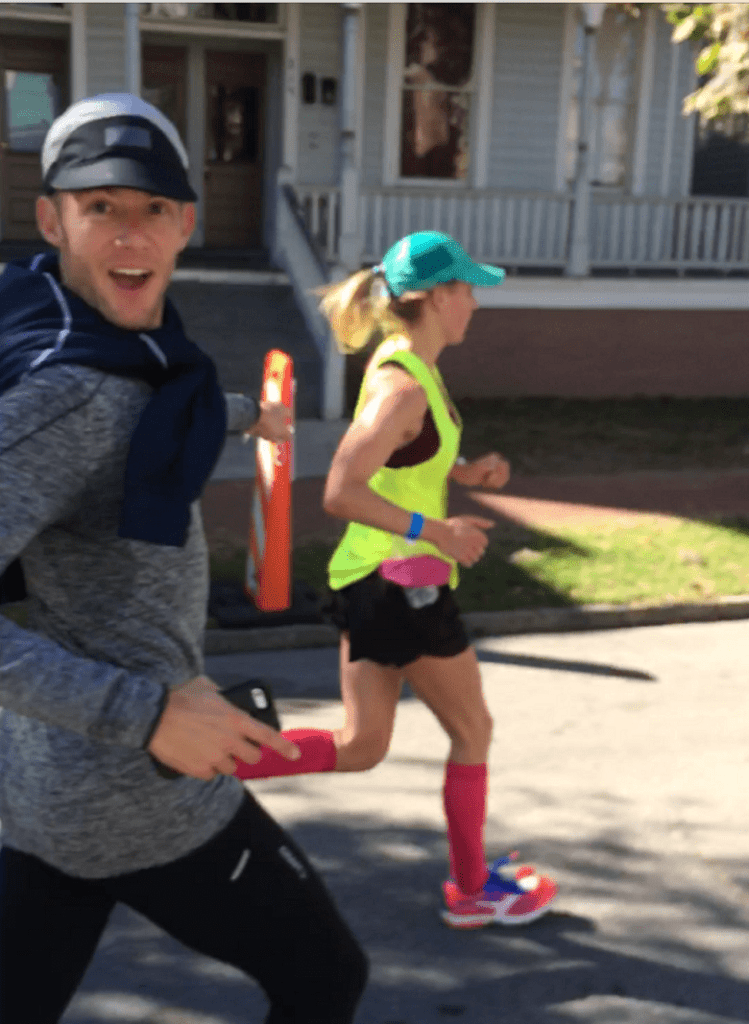 I took my headphones out and just listened to Ed’s coaching the last two miles. He told me how great I was doing and that I was almost there.

While it’s hard to feel any bit appreciative when you’re in that much pain, I tried to remind myself how lucky I was to even have this experience in the first place.

I took in the scenes, the people, the weather, and even my hard earned sweat. I began feeling appreciative, but tired and overwhelmed at the same time.

About half way through mile 26, race volunteers and workers started cheering loudly and saying I was almost there.

Then, I heard my dad cheering, which was just what I needed for the final boost.  Funny story: He figured I’d be exhausted by this point and he would be able to run alongside me to the finish.

However, I was running Ed’s pace and blew right by him. He couldn’t keep up but he got a great video! By the way, Hurdy was my highschool/college nickname.

For the final minutes, I just kept telling myself how close I was and how hard I had trained for this.

It was the most pain I’d experienced in running, my bottom limbs felt numb and I felt like I was going to throw up. These are not exaggerations! The finish line seemed farther and farther the closer I got. 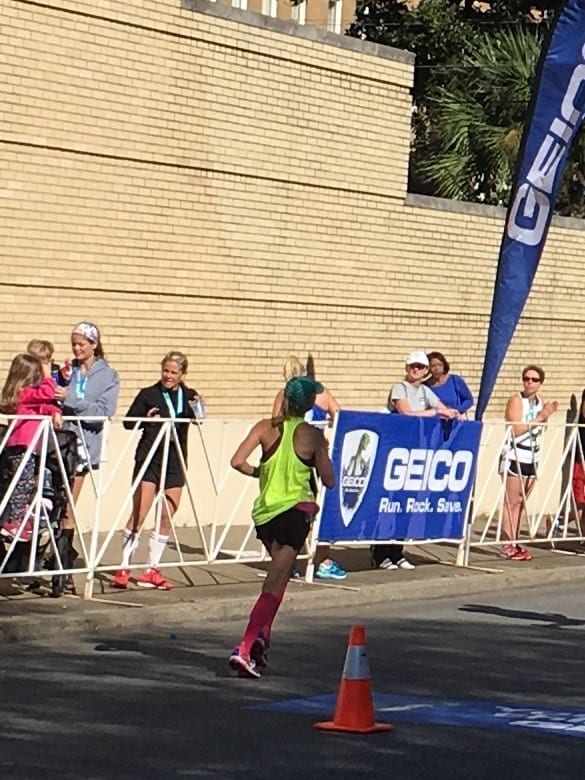 Whatever I had left in me, I used. I thought I saw the finish line, yet it ended up being a slight right turn, which was quite devastating.

The finish line was still maybe 300 yards away. I had just given everything I had left in me, thinking that was the finish line!

At that point, I just did the best I could.

Upon crossing the finish line, it took a few seconds for it to hit me. I HAD FINISHED A MARATHON! 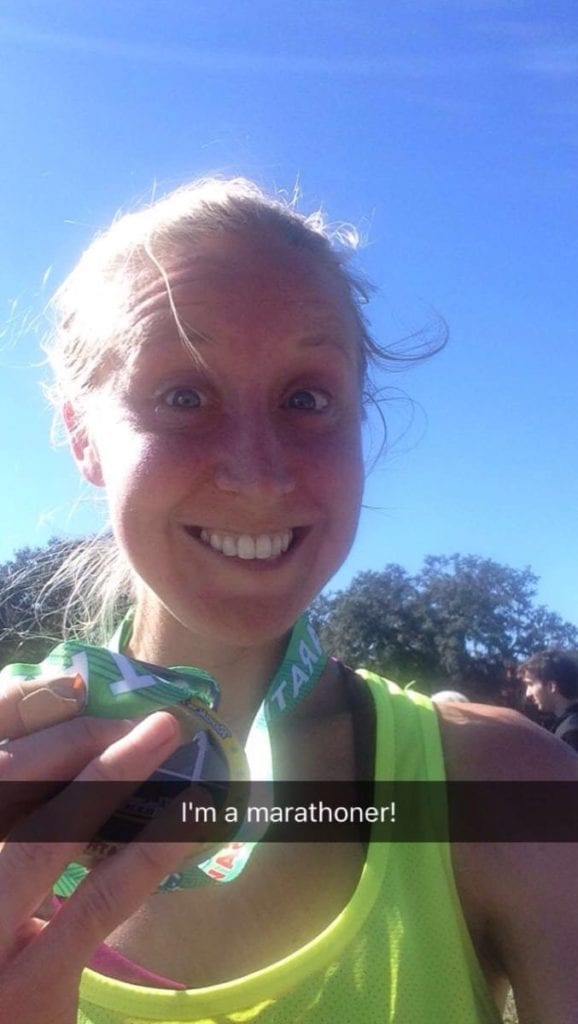 I was tired, sore and shocked and just wanted wtaer. People were handing me chocolate milk, water, bananas, gatorade, etc.

My parents and Ed met me at the finish line and it felt so good to be done.

I grabbed some water and a banana, and headed out to Forsyth Park, where people were gathering after the finish.

Looking back, I don’t think I “hit the wall” at any point. The consistent fueling with my huma gels (4 total) and water really helped.

I avoided the gatorade by all means since I practiced with it once and got stomach cramps immediately.

I also had my own water bottle with tailwind that I sipped on when the water stops were further than I thought or I felt thirsty immediately. 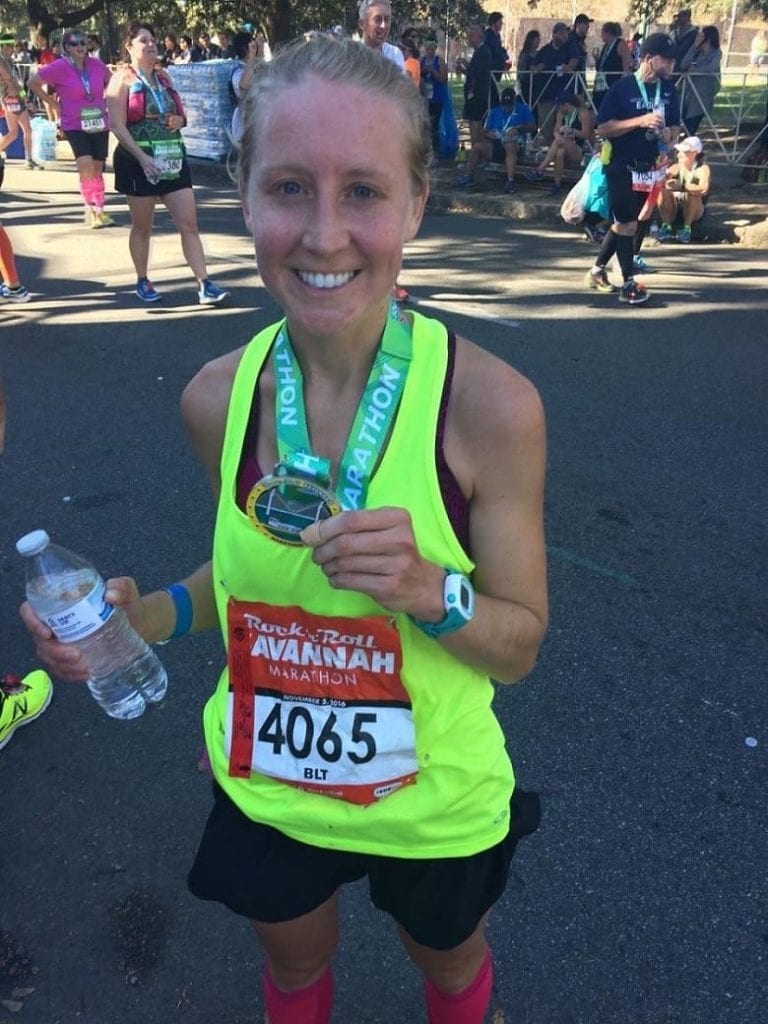 After the race, I got a quick 5 minute massage on my shoulders and legs and drank some chocolate milk. Oh,and Michelob Ultra beer, since they were giving it out for free.

Great refueling if you ask me! And we got these sweet jackets as marathon finishers.

It was such a fun finishing atmosphere and I would love to someday race the Rock and Roll Marathon Savannah again. 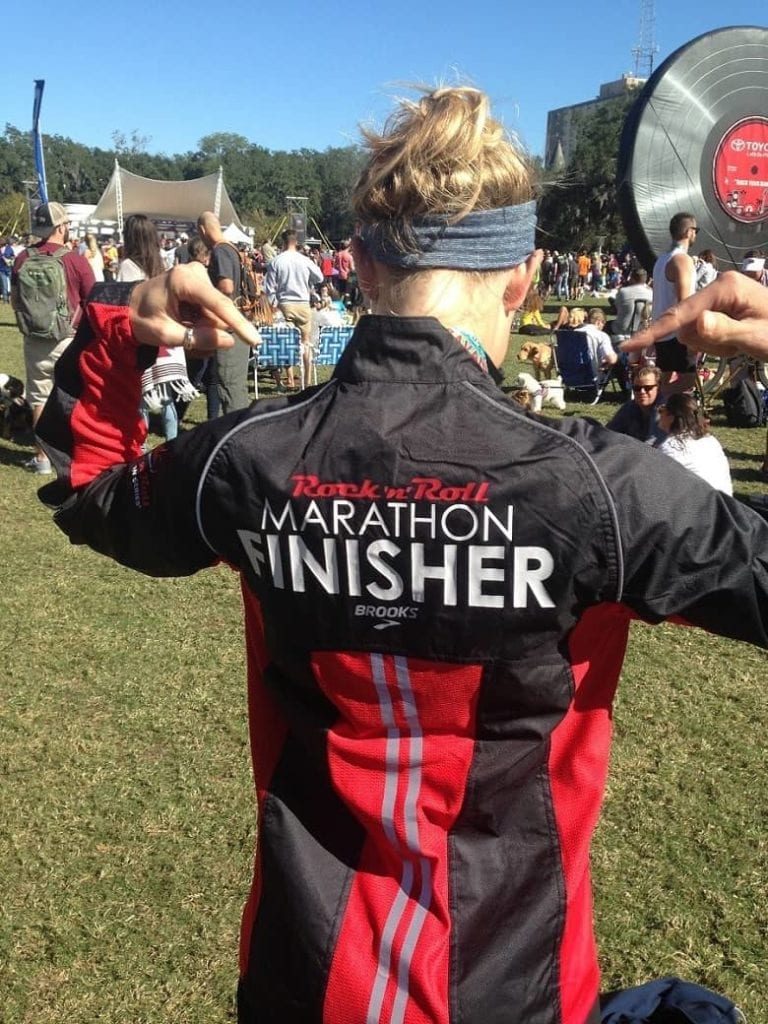 My finish time was 3:41.57. I was pretty happy. I was the 190th finisher overall and the 42nd female out of 1151. Months later, I’d go on to drop 9 minutes at the Ogden Marathon and qualify for Boston Marathon.

In my age group, I was 11th. I’m proud of these accomplishments. It’s amazing what the body can do and a relief to see all of my training pay off.

Take a minute and be proud of yourself, for something…anything at all.

What are you most proud of right now?