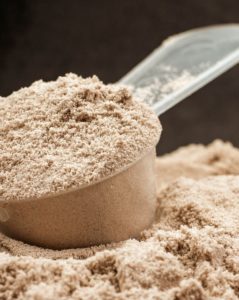 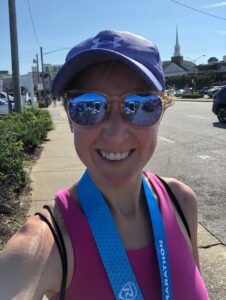 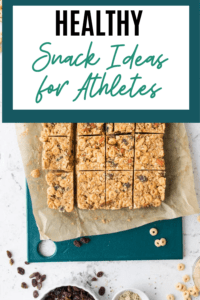 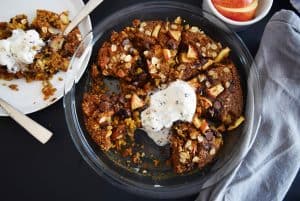 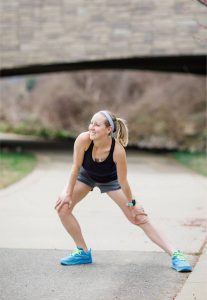 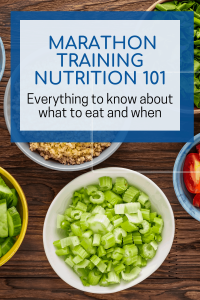 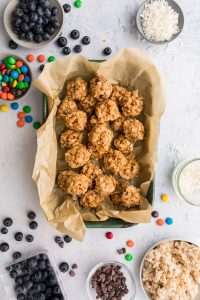 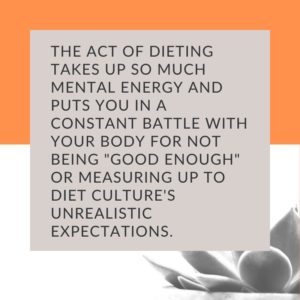 If we’re being honest, I don’t even feel like I was marathon training this week. It was a rough one and I’m trying not to feel too defeated from it. I’m linking up with Deborah and Kim for the Weekly Run Down.

I knocked out 15.5 last weekend, which actually felt rather comfortable. I then did a recovery 3.25 miles the next day to get the blood flowing.  I used Monday as a cross training day and just did a short run on Tuesday before my planned speed workout on Wednesday. Wednesday’s speed workout was a little rushed because I had a flight to catch in Baltimore (about an hour drive).

I did a 2 mile warm up, and then some intervals, based on time not distance.

At this point, I would have done another 3-2-1 down but I was short on time, so I added another 2 minutes hard, one minute easy. I followed it up with a 1/2 mile cooldown, which wasn’t enough either, but something is better than nothing! I then rushed home to shower, change, load the car, drop Camryn at daycare and head to the airport. Thank goodness for being TSA pre-board because I was having some major anxiety about making it to the gate on time, but all was ok.

I spent the rest of Wednesday and the better half of Thursday in Chicago for a sponsored blog trip. I was invited by the Barilla team to learn a little bit more about them as a company, some of their food products, and give some feedback about what consumers think about pasta.

Even though I work 1-1 with a lot of runners, I still hear about pasta being a constant fear food among clients. Diet culture has demonized pasta as a “bad” food, villianizing it for its carb content.

Nutritionally and biochemically, nothing about that is true. Pasta is actually a very healthy, balanced food, and it’s a great vehicle for including other food groups. For example, adding proteins like shrimp or chicken, or other veggies like spinach, broccoli and onions.

Barilla has a variety of product offerings available (gluten free, chickpea pasta, veggie pasta) and they are constantly testing and evaluating more.

I personally appreciate their reliance on consumer feedback. Their protein based pasta was originally made from egg and lentil protein. However, they received consumer feedback about wanting to reduce allergens and egg products, so they retested and came out with a new recipe for protein pasta that is egg-free and instead uses lentils and pea protein. They also have some new pasta sauces coming out that are very artisanal, like you would make in your own kitchen, with limited sugar and salt. And their price point is very reasonable. I’m looking forward to stocking up on them! It was a late nite Thursday night, as I arrived home close to midnight. I woke up Friday feeling drained, so didn’t want to force myself to do my long run, even though the last few longs runs on Fridays have gone great. I just needed to rest and reset.

But, I wasn’t able to get the run in on Saturday either, since Ed was gone for the day and I was dealing with a vomiting baby and a dog who’s cast fell off so we had to run her to the vet. It was one thing after another, and while I did get a stroller run in, it was only 3 miles.

I’m trying not to feel too discouraged about the lack of mileage and quality runs this week, but this is life and I am all about embracing that flexible training plan. I’m planning to go long Monday morning, and then see what I can pull off this week before my sister’s wedding next weekend. I knew when I signed up that I had a pretty committed fall, which is why I’m trying to be as practical and reasonable as possible with this training plan.

And, here are some yummy recent eats. Lots of pumpkin things…

An aldi find that I love putting on my yogurt and pancakes. I was buying Perfect Bars every single week so I just splurged on a big box. Aside from that, I also do the KIND Snack Club program, where they send me snacks every few weeks. I love it! We harvested some swiss chard at a community garden in Chicago! A blueberry burrata from Spiaggia in Chicago. Their chef, Joe Flamm, was a Top Chef champion. The Barilla chef teaching us the right way to cook pasta. Did you know if you do it al dente, it will keep you fuller for longer? It’s because the starches are less broken down, so they will take a longer time breaking down in your digestion process, therefore keeping you fuller for longer. Yummy veggies at the Barilla HQ. We all teamed up and made different pasta dishes based on themes – there was an indian theme, a budget friendly, a summer seasonal and I forget the other one. I had to try them all! Pumpkin Chicken Crockpot Chili – my favorite fall soup. (This was before it was all cooked). Have you ever felt undertrained for a race?

bucketlisttummy_rd
DYK you can make crispy tempeh in the air fryer?

Made our tried and true favorite pizza beans tonig