Hi there, I feel like I’ve been gone from this space for so long! While I had some scheduled posts go up last week, it’s not the same as posting real-time and interacting with you all through the comments.

Thank you all for the well-wishes for our trip and while I have so much to recap with you, I’ll probably split it into a few posts due to the large amount of text and pictures I have to share, and lots of eats!

You’ve been warned – this is very photo heavy! 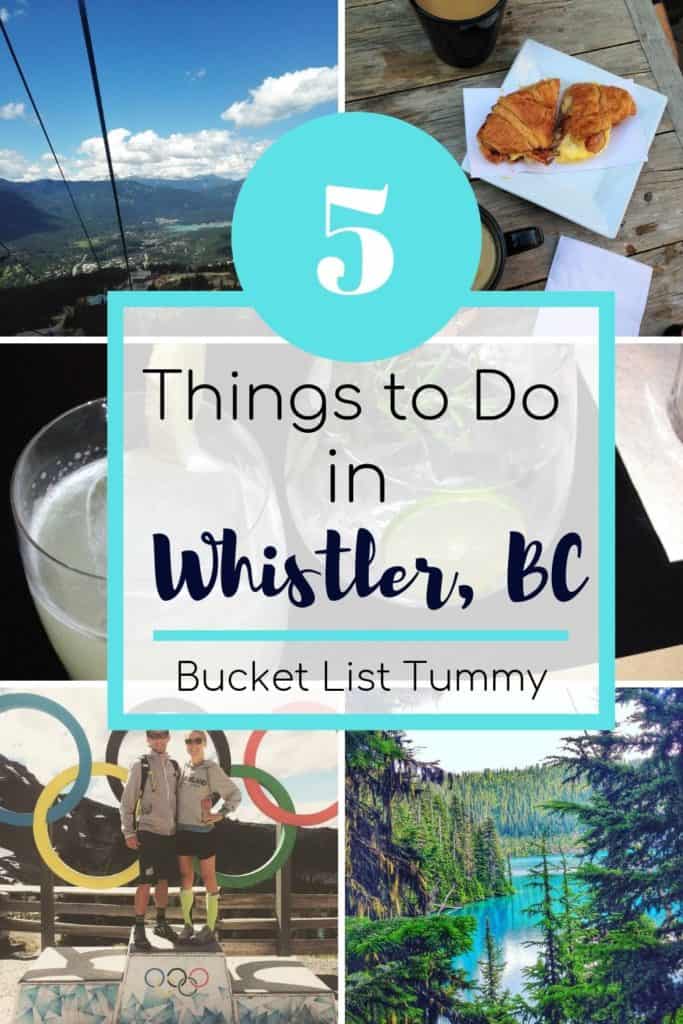 What to Do In Whistler, Canada 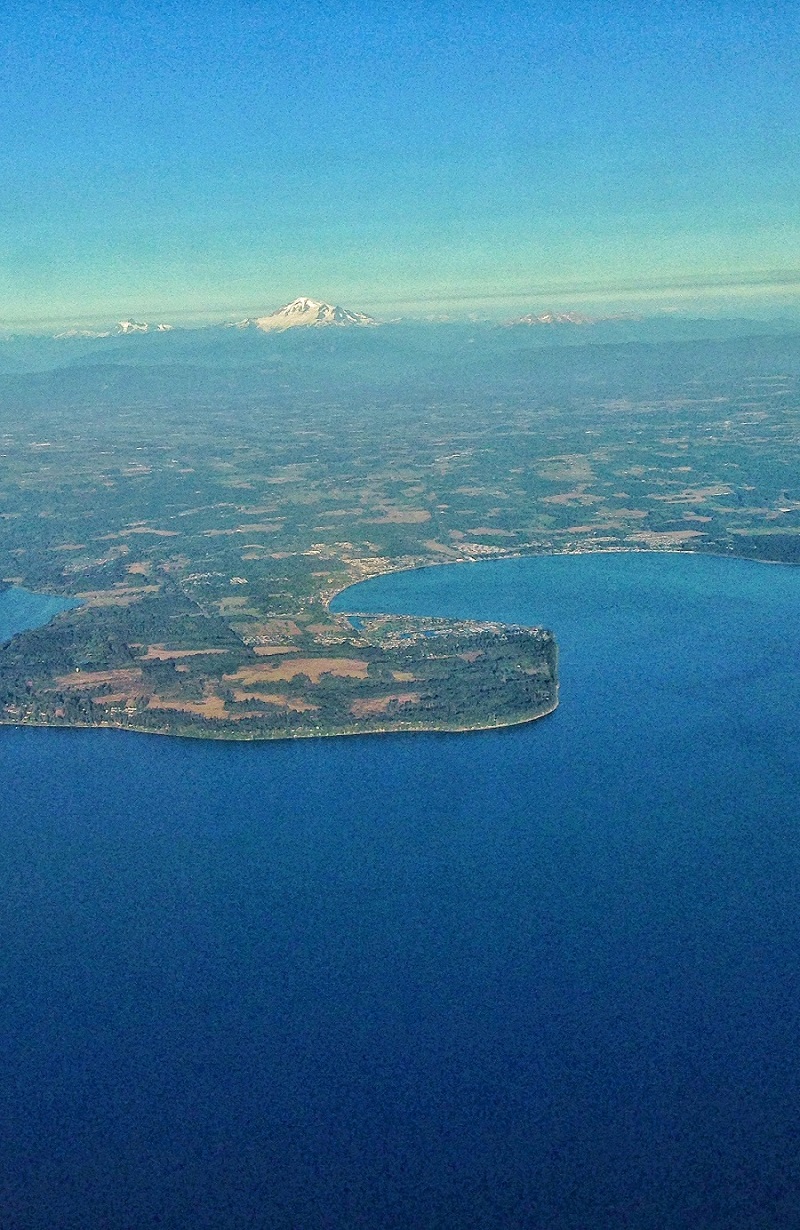 As I had previously mentioned, Ed and I took a week-long trip to Vancouver, Canada, to celebrate our one year wedding anniversary, which also coincided with my birthday.

Today’s recap will focus on the first part of our trip in Whistler, a two hour drive north of Vancouver.

Whistler is a very popular winter destination for skiing and snowboarding, so we knew we would find some great mountains and hiking.

We love exploring the outdoors so it was a perfect match. 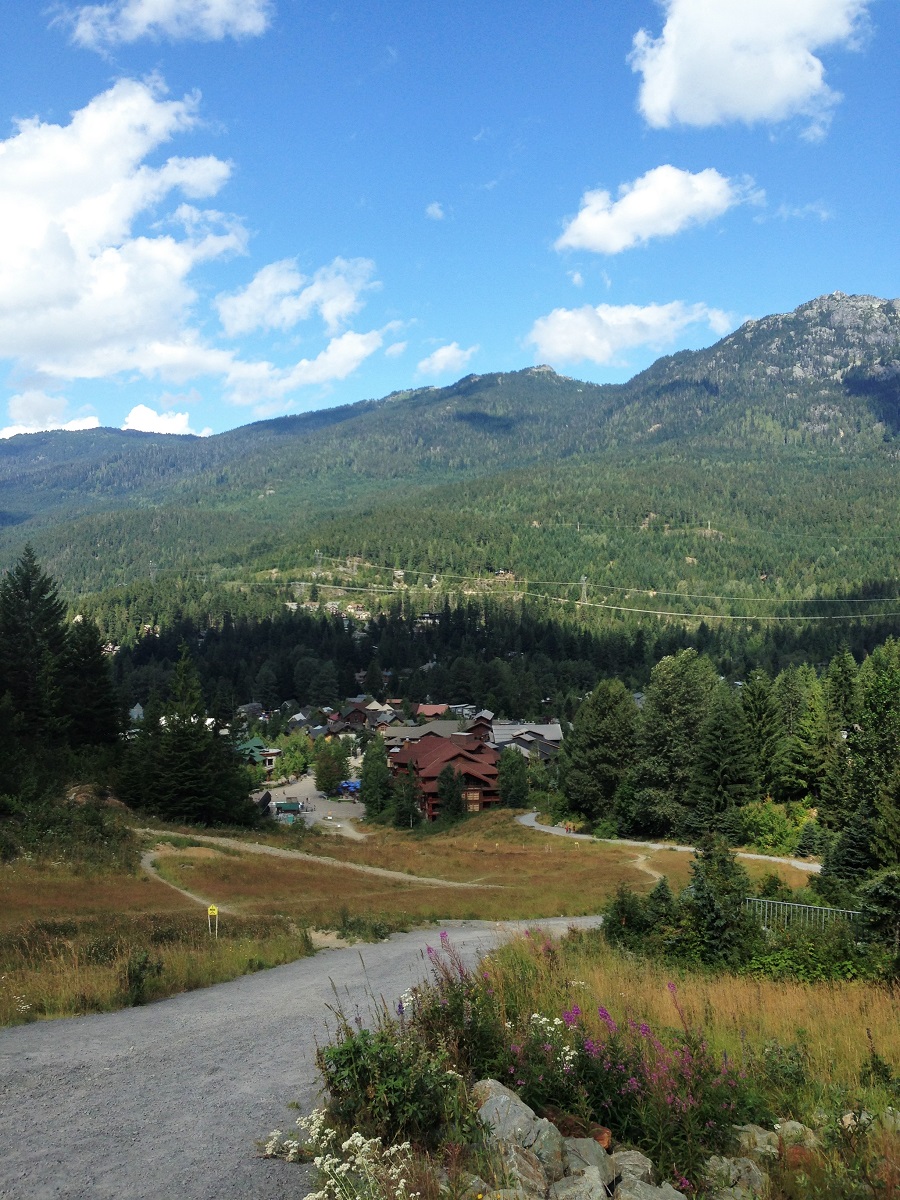 The trip got off to a rough start as my checked bag didn’t make it to Vancouver after a long day of traveling. But, alas it was vacation so I didn’t let it get me down!

The weather felt absolutely amazing, and I can’t tell you how nice it was to be away from the humidity! We landed around 9pm PCT, picked up our rental car, and drove the two hours to Whistler.

We were exhausted by this point so went right to bed. 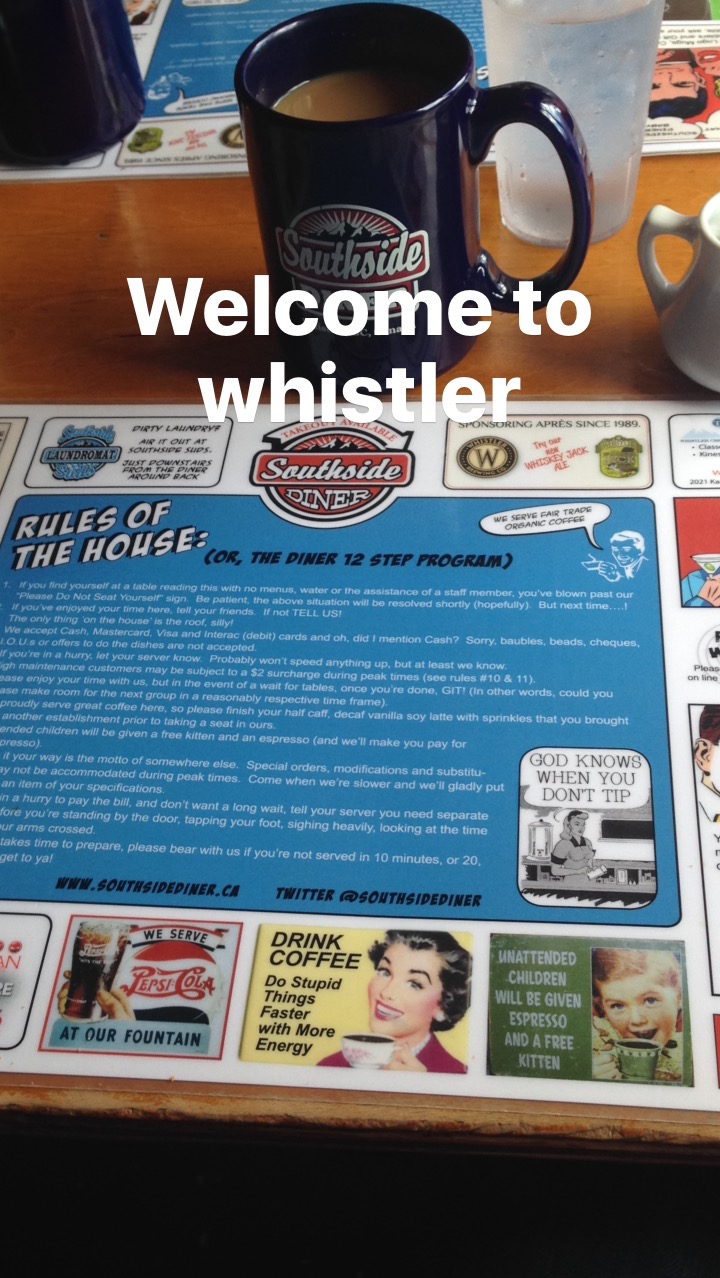 Friday morning started with breakfast at the Southside Diner, at the suggestion of our Air BnB host. I got the brie stuffed french toast with homefries and an Americano coffee.

Perfect fuel for a day of exploring.

What To Do in Whistler in Summer Season 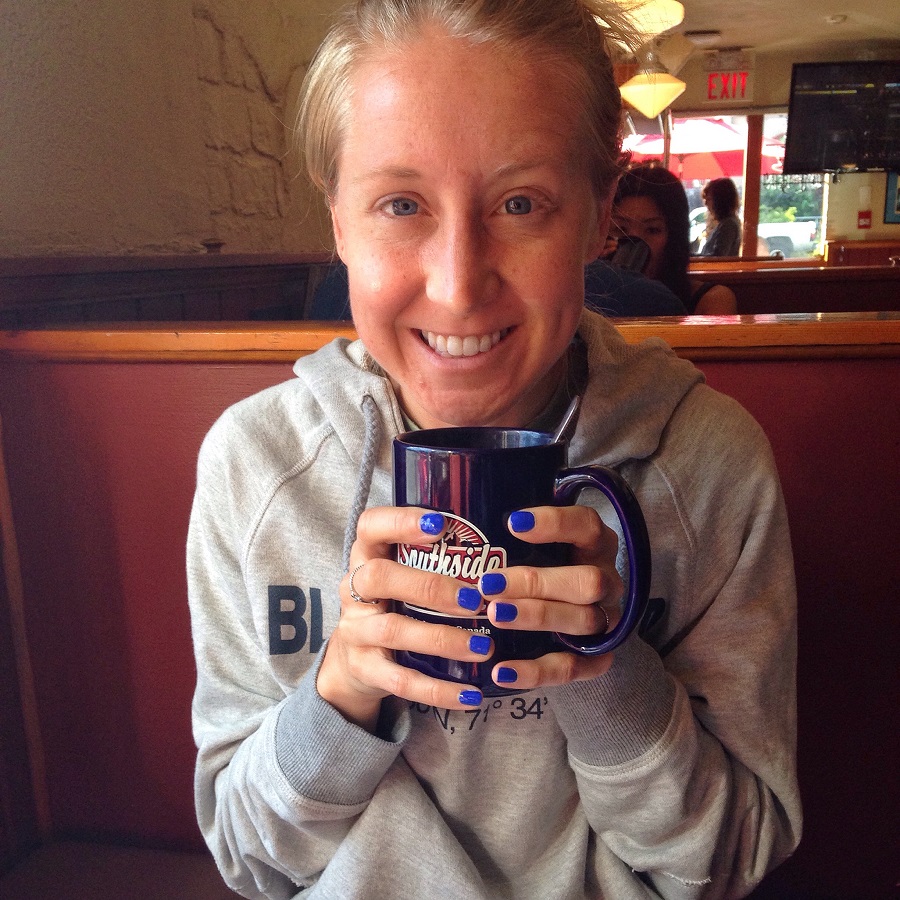 Day 1 in Whistler, BC

Then, we went to explore Olympic Village. The 2010 Winter Olympics were held in Whistler and Vancouver, and I could totally see this Olympic Village being the perfect area for athletes.

It was really big, but also quaint at the same time. We went for a little jog and explored.

We then took quick showers, grabbed some subs for our hike, and headed up the Whistler gondola. 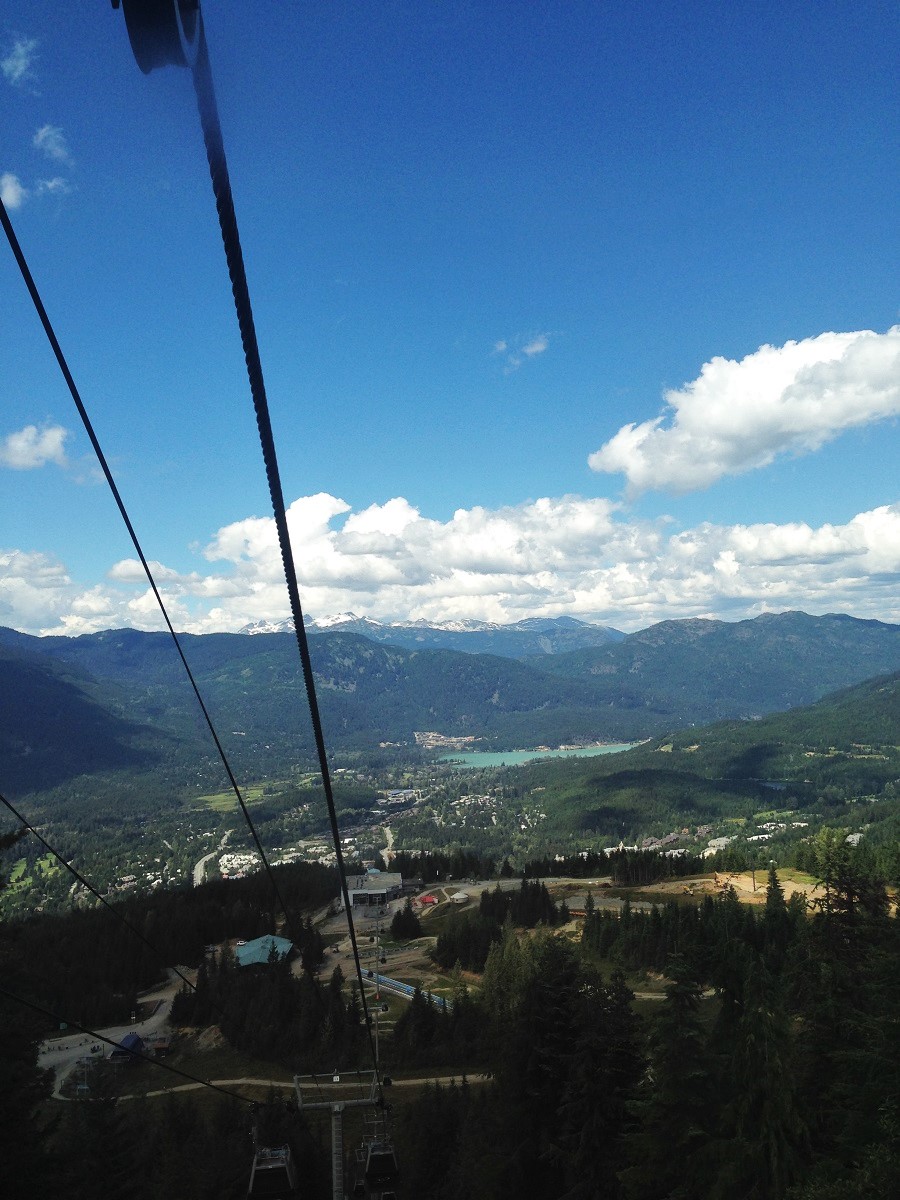 And, obviously, we had to pose in front of the Olympic rings at the top!

Apparently, the Peak 2 Peak Ride is a Guinness World Record for the world’s longest unsupported span for a lift of 1.88 miles, and the highest lift of its kind (1,427 feet). Pretty neat! 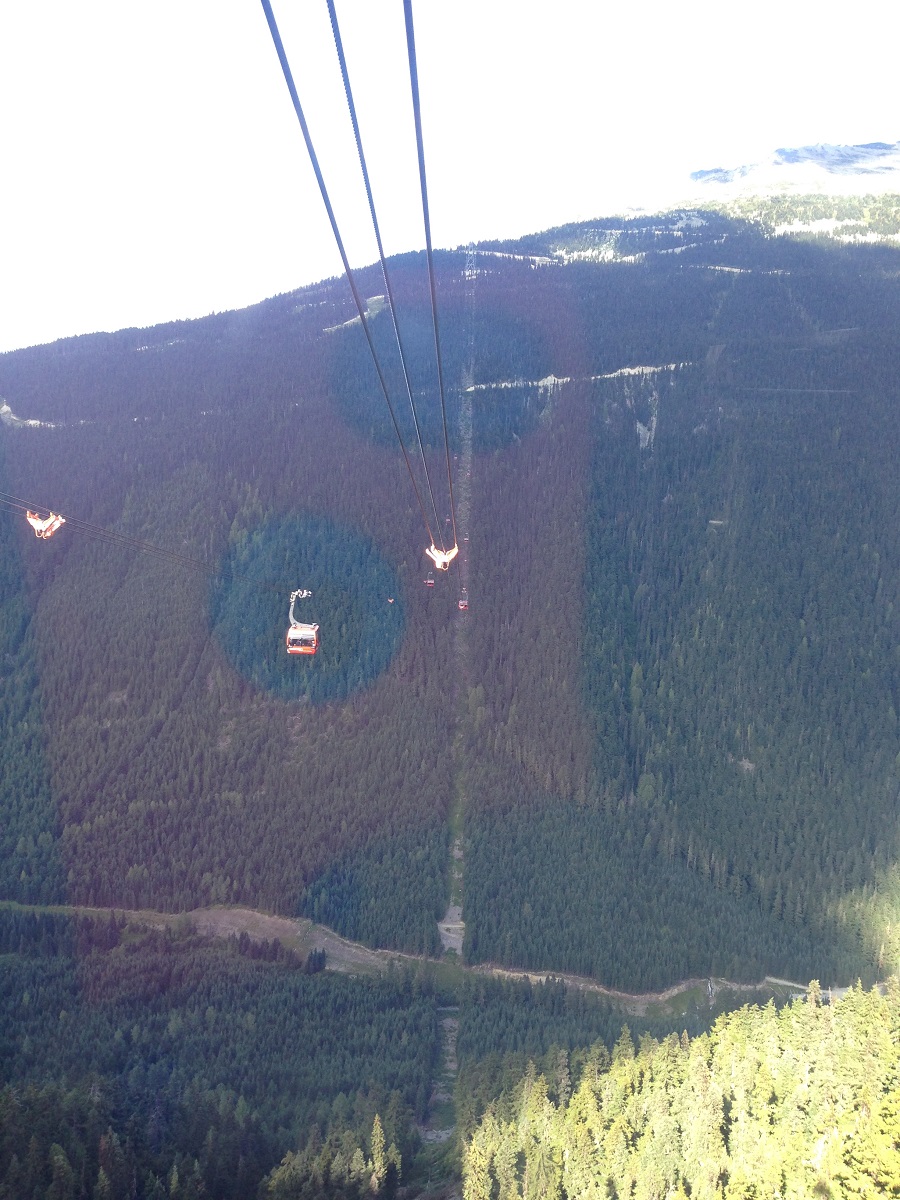 Those little red guys are what we rode in! I do not enjoy heights but I did enjoy all of this beauty. 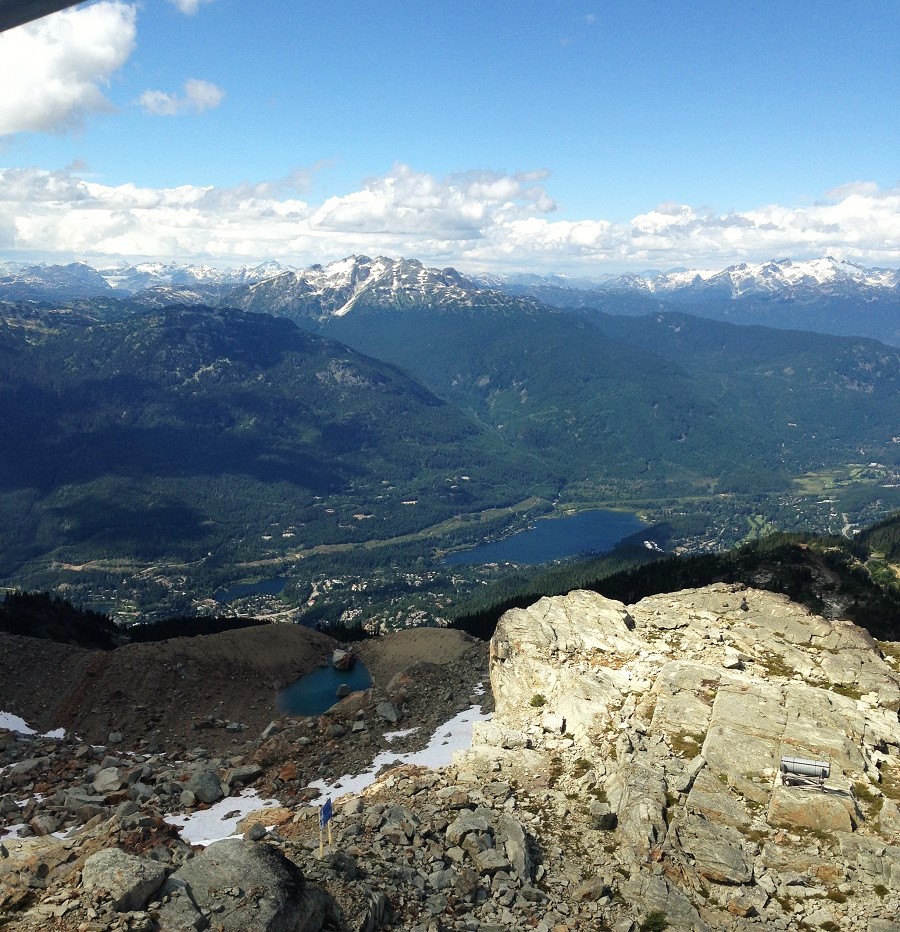 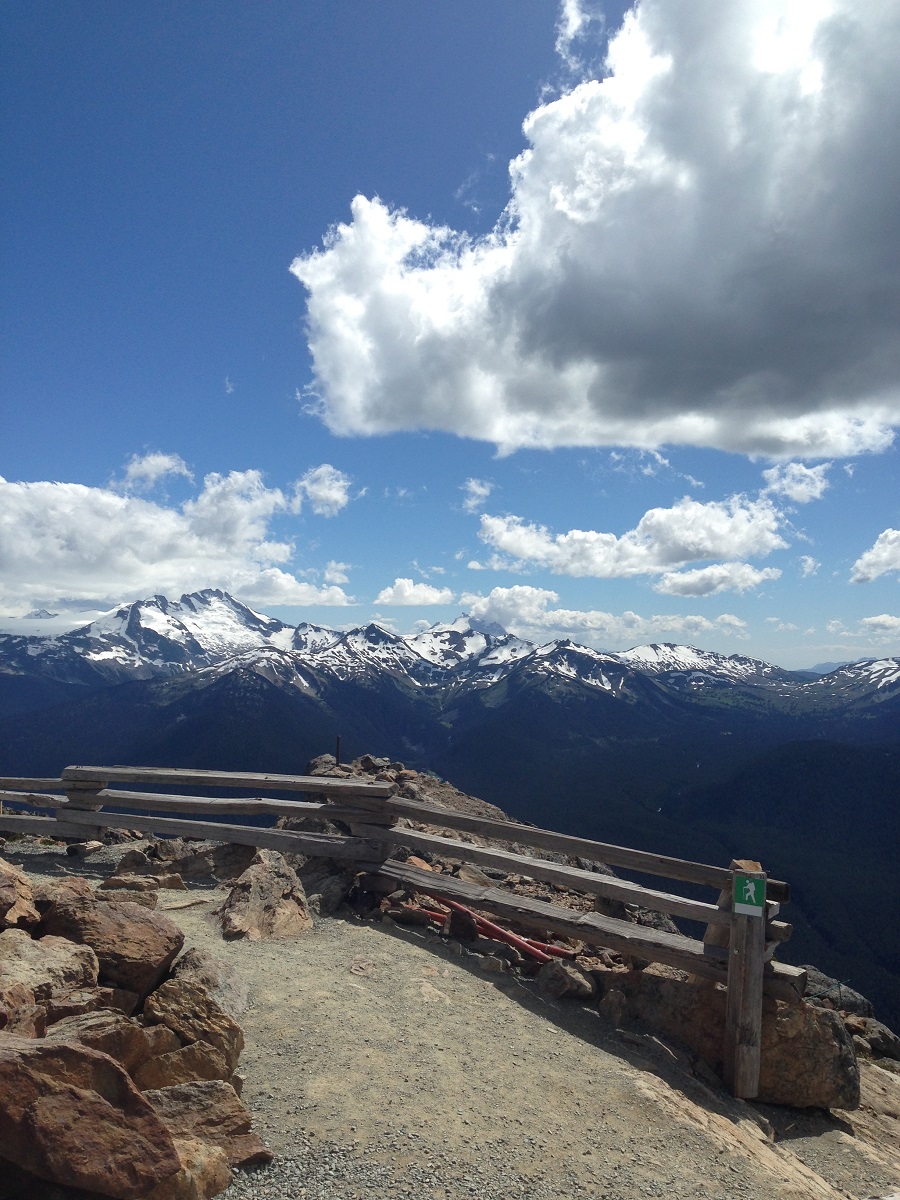 We opted to hike down the mountain, rather than take the gondola. By the time we got down, we got a call that my bag was being delivered so we headed back to our Air Bnb to get my bag, which fortunately arrived in one piece, and just like that, I had all my necessities back!

We had dinner Friday night at Elements, an adorable, local tapas restaurant in the village. We loved everything we ordered, including the Canadian beer

. The service was great, and the atmosphere was cozy. My favorite dish was the deconstructed ahi tuna taco! 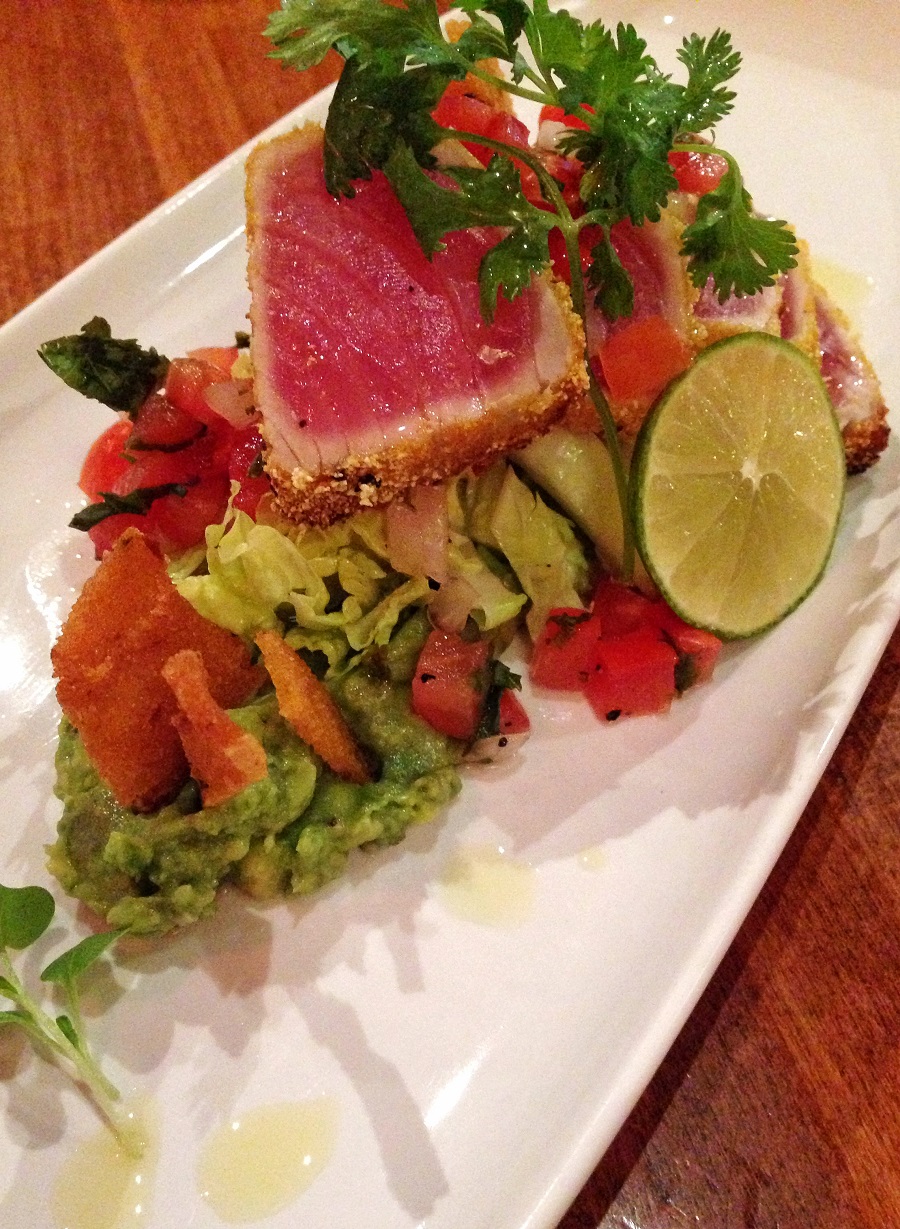 After Elements, we explored more of Whistler Village, and ended up at an upscale cocktail bar called Oso.

They had 6 different gin and tonic choices (Ed’s favorite drink), so while he opted for one of those, I ordered the “Powder Day,” with bison grass vodka, Cointreau, fresh lemon and muddled ginger with one large ice cube (just how I like it).

I liked my drink, but they were quite pricey, so we headed home after one.

Day 2 in Whistler, BC

After some much-needed sleep, we took Saturday morning easy. Ed ran out to Tim Horton’s (Canada’s local Dunkin Donuts’ equivalent) and brought back bagels and iced coffees, while I opted to sleep a little later.

We then headed back to Whistler Village for a 6 mile run around Lost Lake. It was gorgeous and there was a big loop around the lake, busy with runners, walkers, and cyclists.

Man, I would love to run this loop daily! 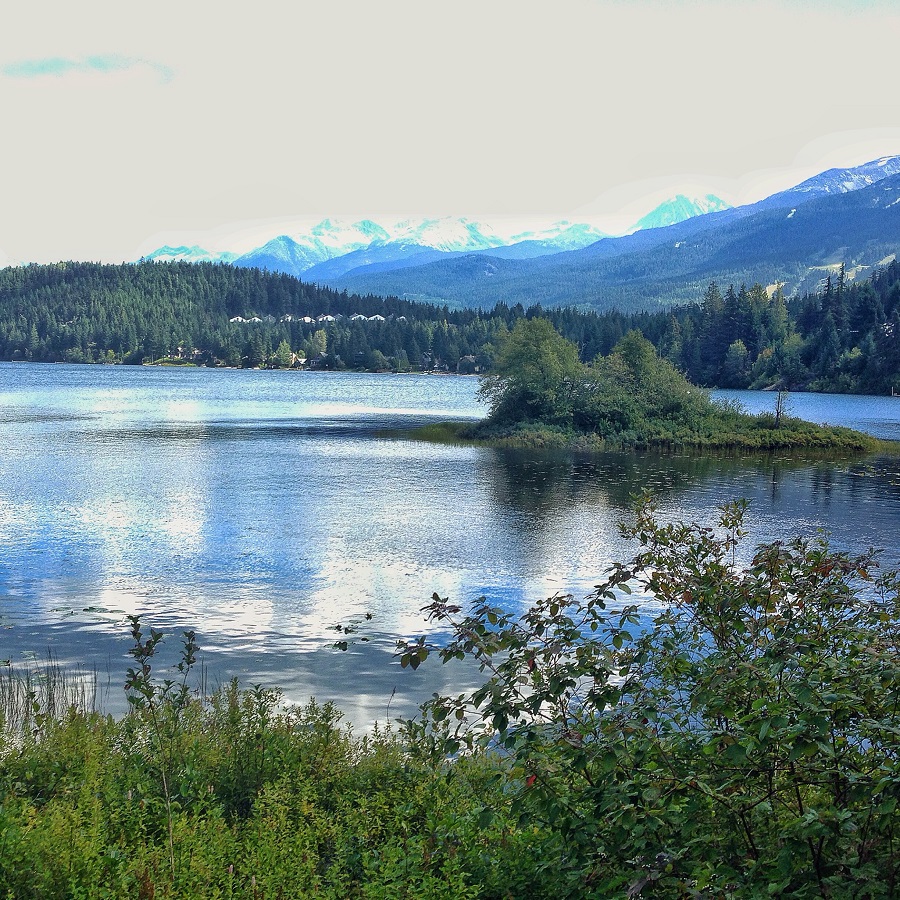 Then, we stopped at Lake Garibaldi  on our way to Vancouver, which I read about, heard about from the locals and also from Danielle’s awesome blog (thanks Danielle!!!).

The roundtrip hike was about 18 km (~11 miles). The first 3.5 miles of the hike is very wooded with lots of switch backs. 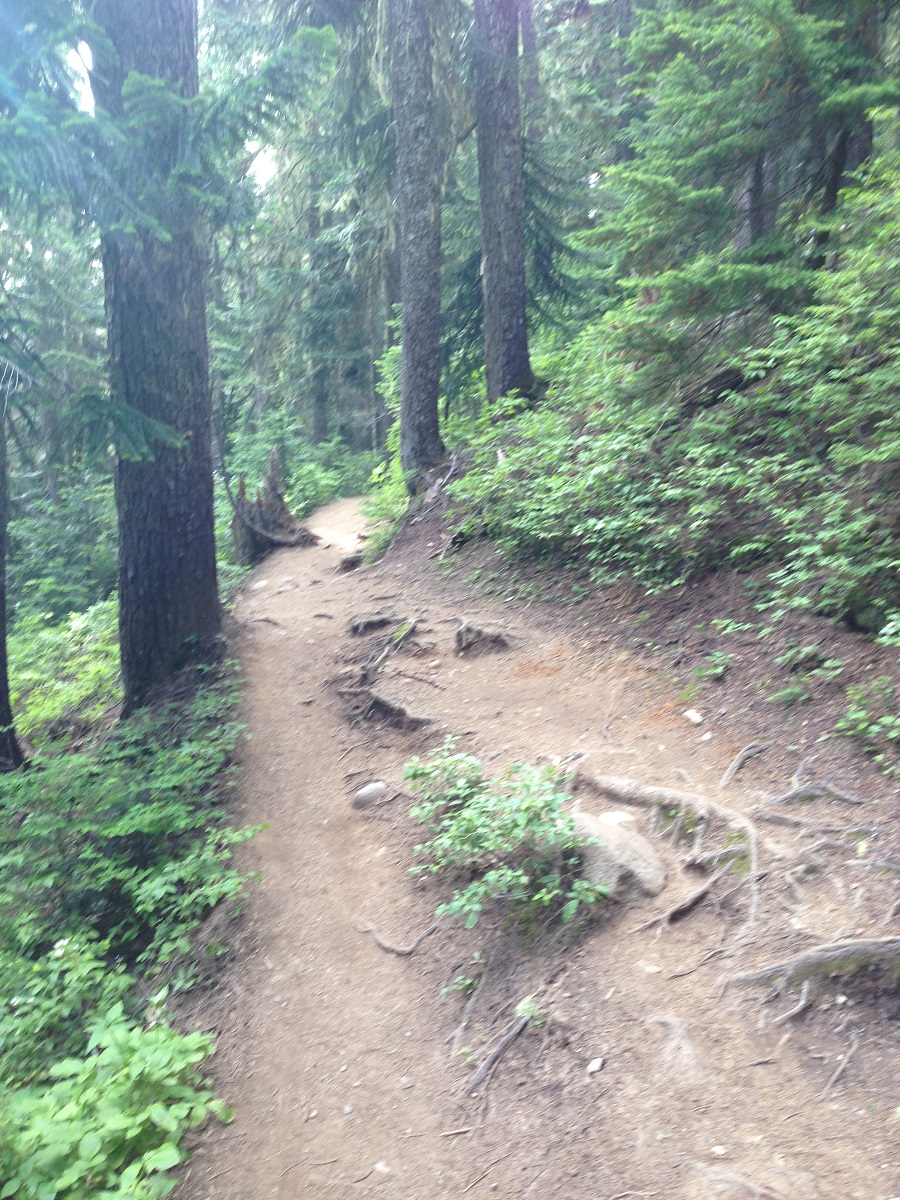 There weren’t many views going up. We really had no hint of an idea about the beautiful lake awaiting us, until it started opening up. 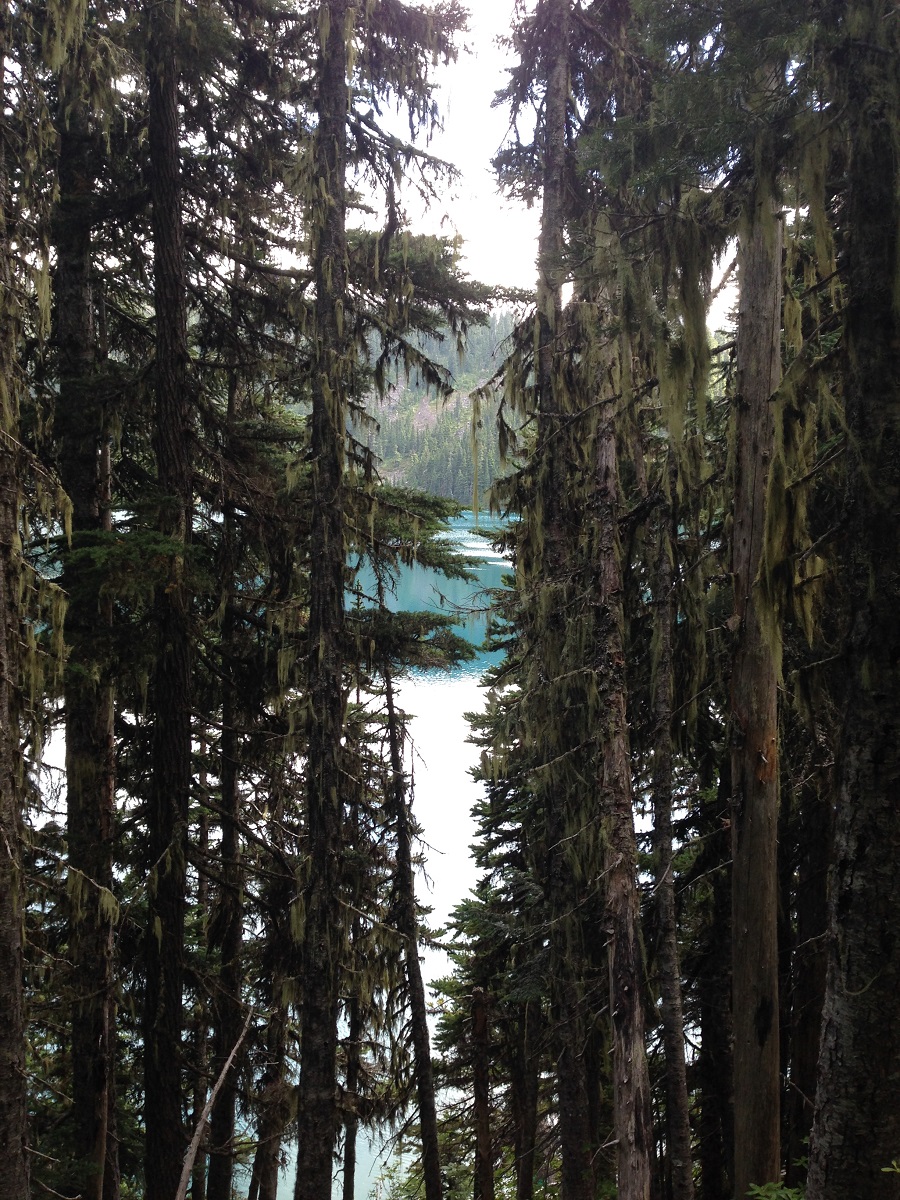 Then, we saw the lake’s beauty! 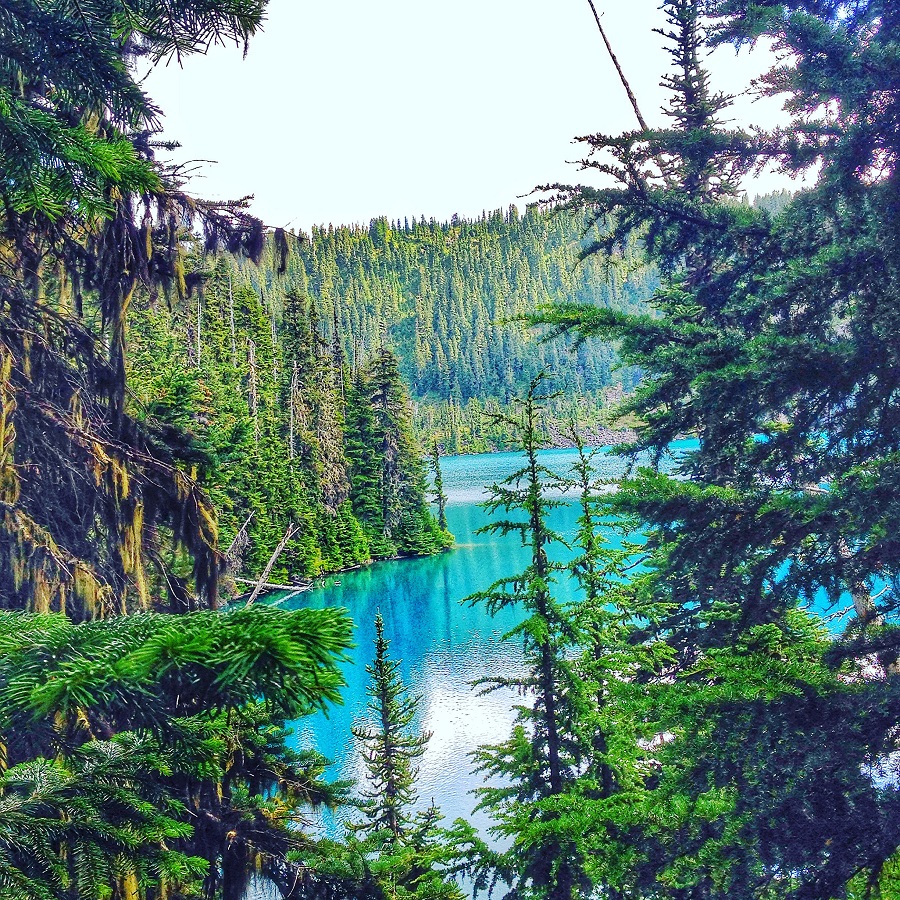 The photos can’t do the lake color justice. The color is breathtaking and was undeniably, the prettiest color I’ve ever seen! 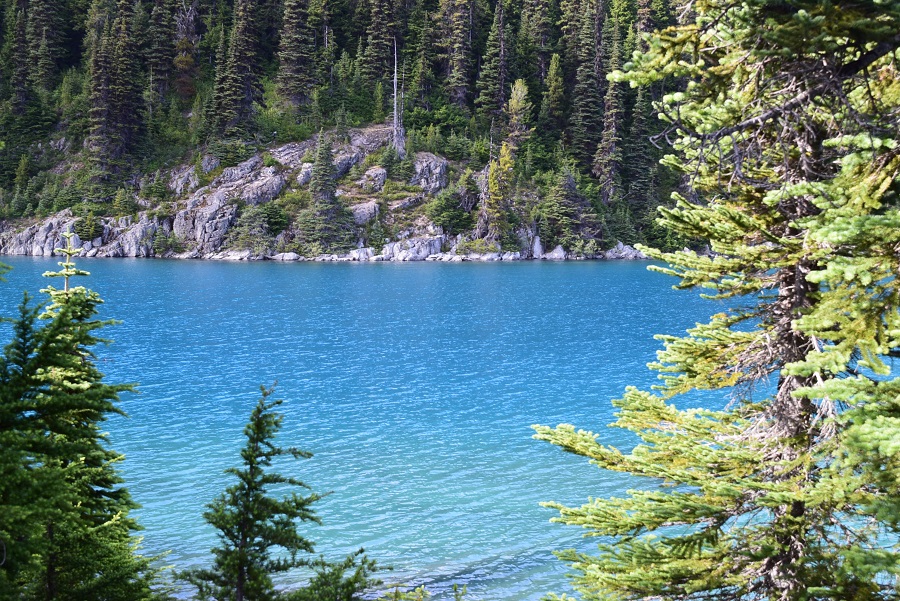 Lake Garibaldi is massive, and surrounded by picturesque mountains in the background. The hike up is definitely worth the view. Once we arrived, we had a little picnic at the lake and obviously took tons of pictures.

We actually saw many people that were camping in the area for the night, which would have been pretty fun! 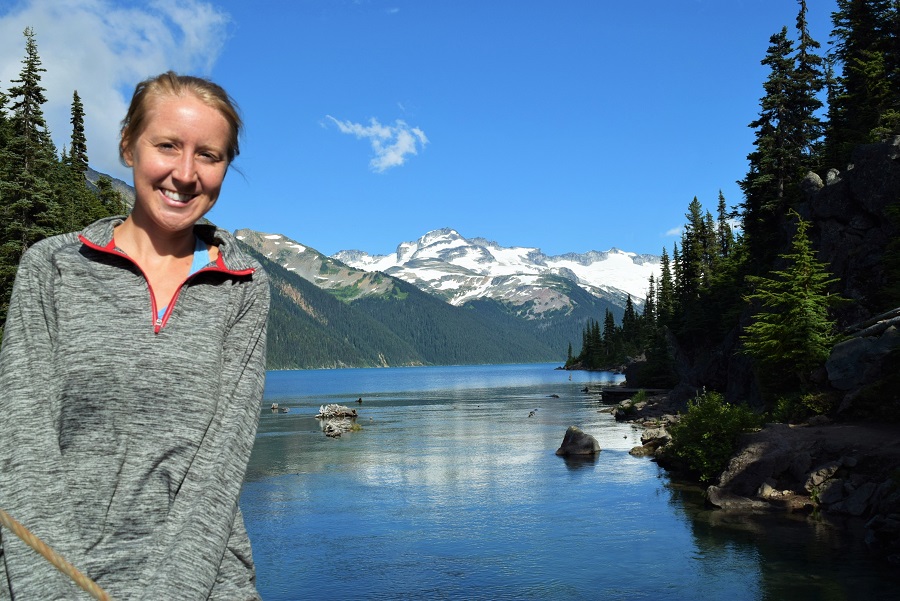 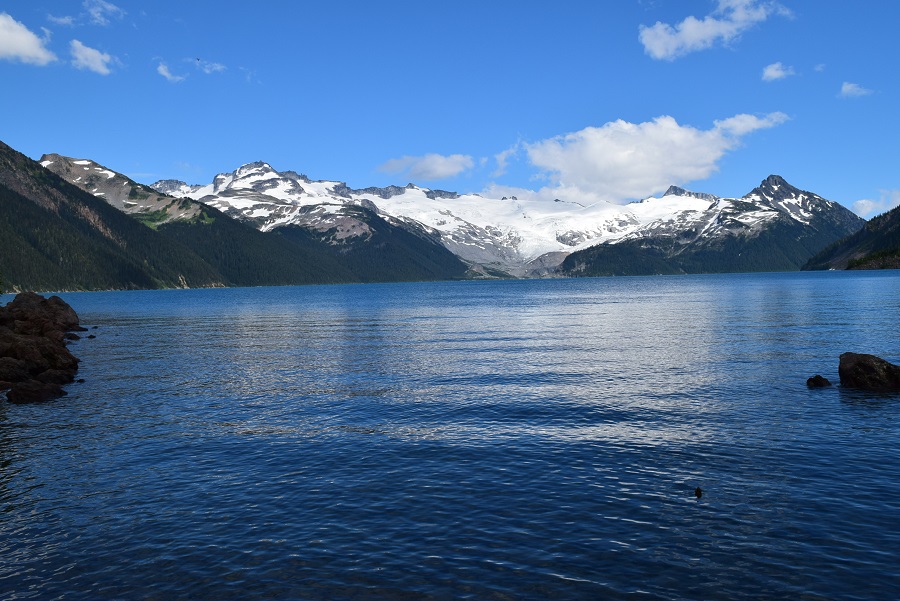 The hike down wasn’t any walk in the park, as my quads were screaming the whole way down, probably as a result of Friday’s hike as well.

Note: You will be sore for days after this hike! But man on man, I wouldn’t trade that hiking experience for anything! 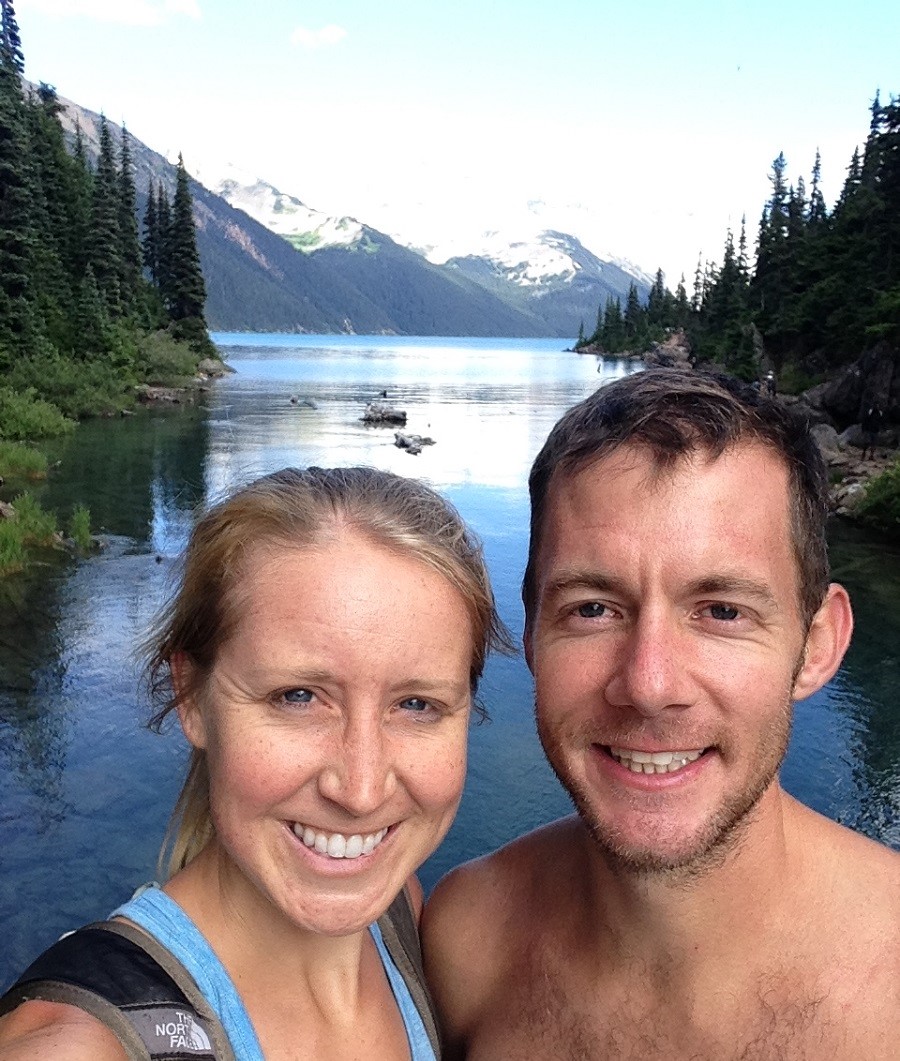 Furthermore, the drive from Whistler back to Vancouver was the most breathtaking, spectacular drive I’ve ever seen along the Sea to Sky Highway (Highway 99).

Seriously, I am overwhelmed by British Columbia’s beauty.

Next up, we spent a few days in Victoria, which I’ll recap next week.

I hope you have a great week! Linking up with Hoho Runs and MissSippiPiddin for the Weekly Wrap!

So, have you ever been to Canada or BC?

Do you find that hard hikes are worth the views?