This post is sponsored by the NC Department of Agriculture. All thoughts and opinions are my own.

Hi friends! I was invited on a western North Carolina Farm Tour a few weeks ago. I joined an amazing group of food bloggers from both the Charlotte and Raleigh areas. It was in partnership with the NC Department of Agriculture to help bring together influencers and farmers, and help both groups learn about each other. It was such a great learning experience and amazing opportunity. I’m so excited to share about it with you all. It was a busy, fun-filled 2 ½ days, so I’ll probably break it into a few posts

We left Charlotte in the afternoon on Wednesday, and I, along with two other Charlotte food bloggers, drove to meet up with the rest of the group. Our first stop was at Fading D Farm, a couple-owned farm in Salisbury, NC. Fading D Farms is quite unique because they produce their own water buffalo cheese. They are also one of only 6 water buffalo creameries in the United States! 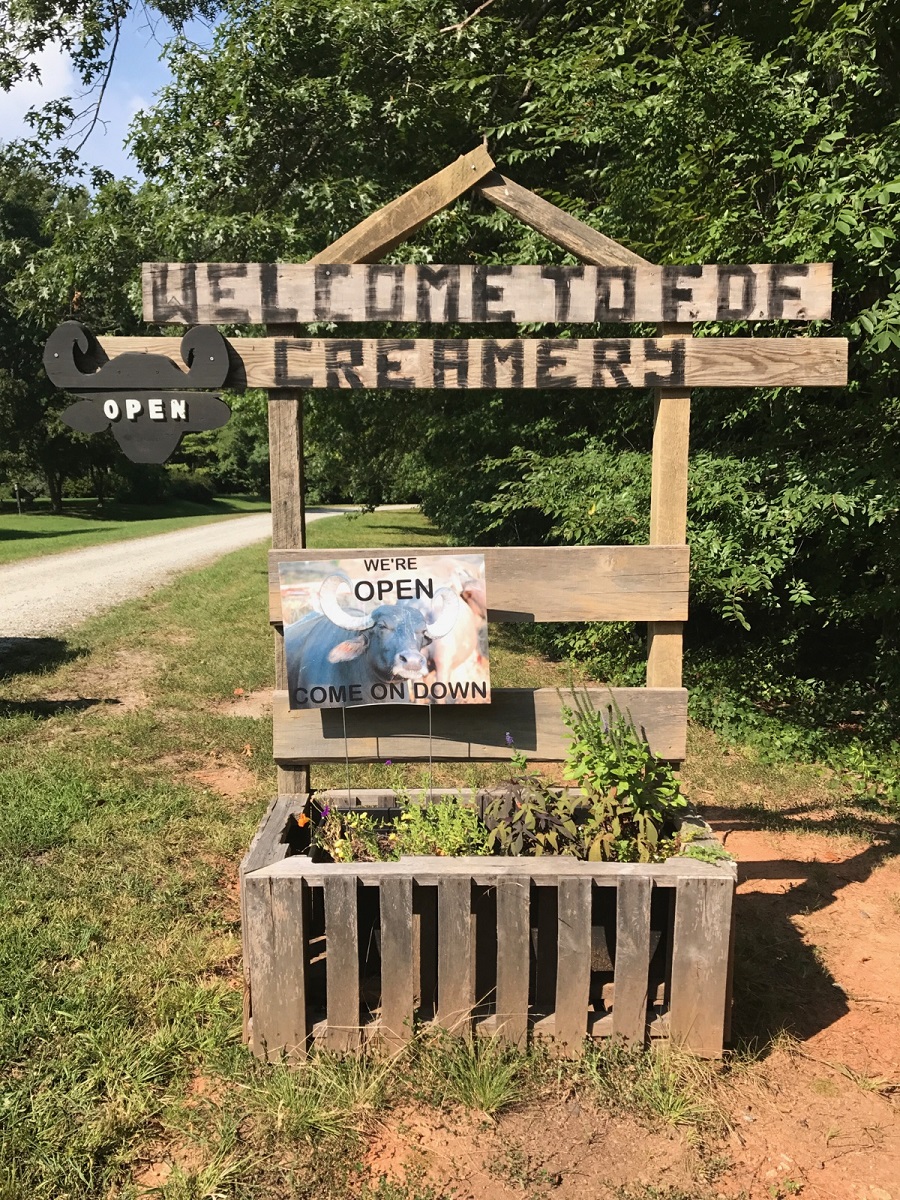 They also happen to be a stop on the NC Cheese Trail! <– Also, how did I never know this existed? There are like 22 stops!

Fading D Farms has over 35 pasture fed water buffalo. Faythe and David, the owners, fell in love with water buffalo mozzarella cheese after traveling to Italy. They took an artisanal cheese making class in Italy and brought the idea back to North Carolina.

Did you know water buffalo produce 1-1 ½ gallons of milk a day? Their milk is also 30% higher in protein than cow’s milk, and has 2x the butterfat. Those with dairy allergies may better be able to tolerate A2 protein better., so if you have a lactose allergy or intolerance, you should give A2 milk a try!

The females all had names like “brie,” “gouda,” and “ella” for mozerella, which I thought was so cute. The name males after cuts of meat. 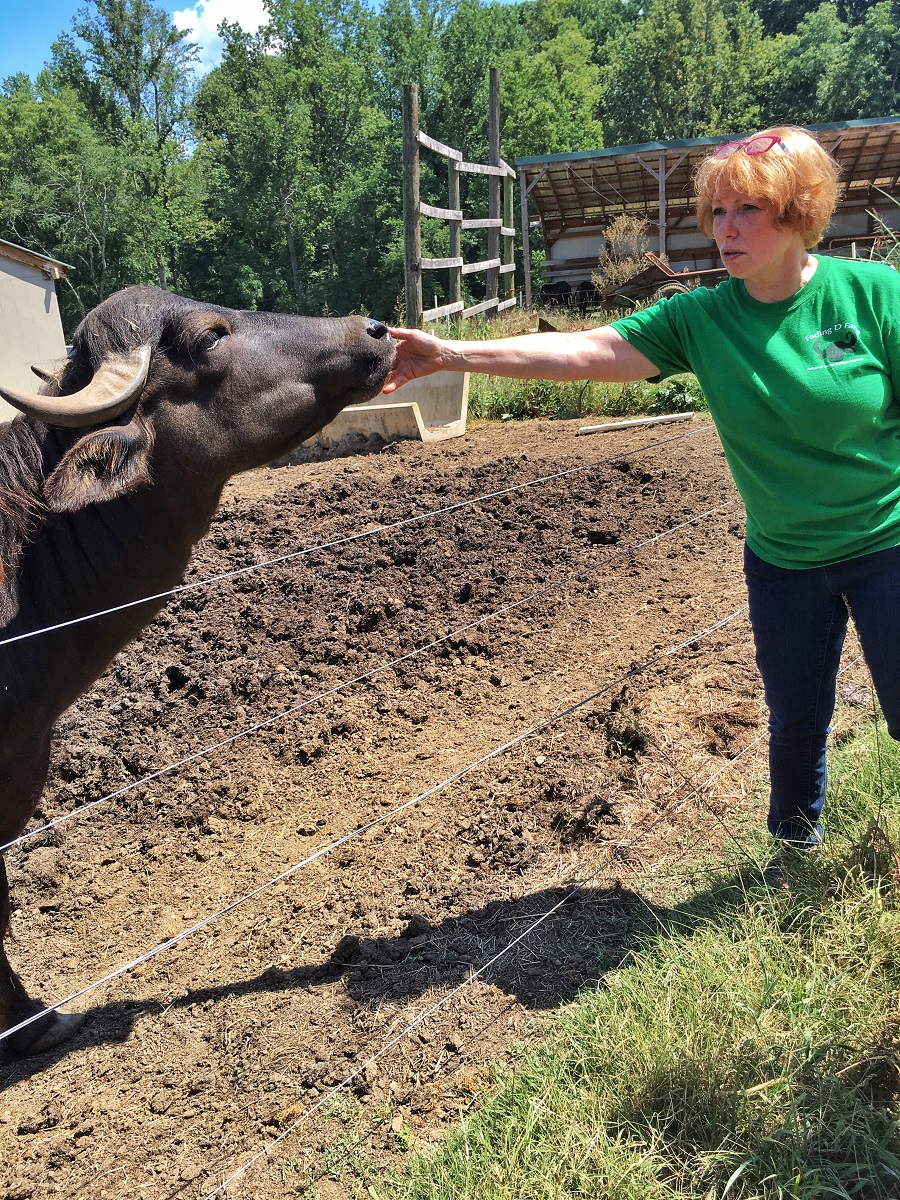 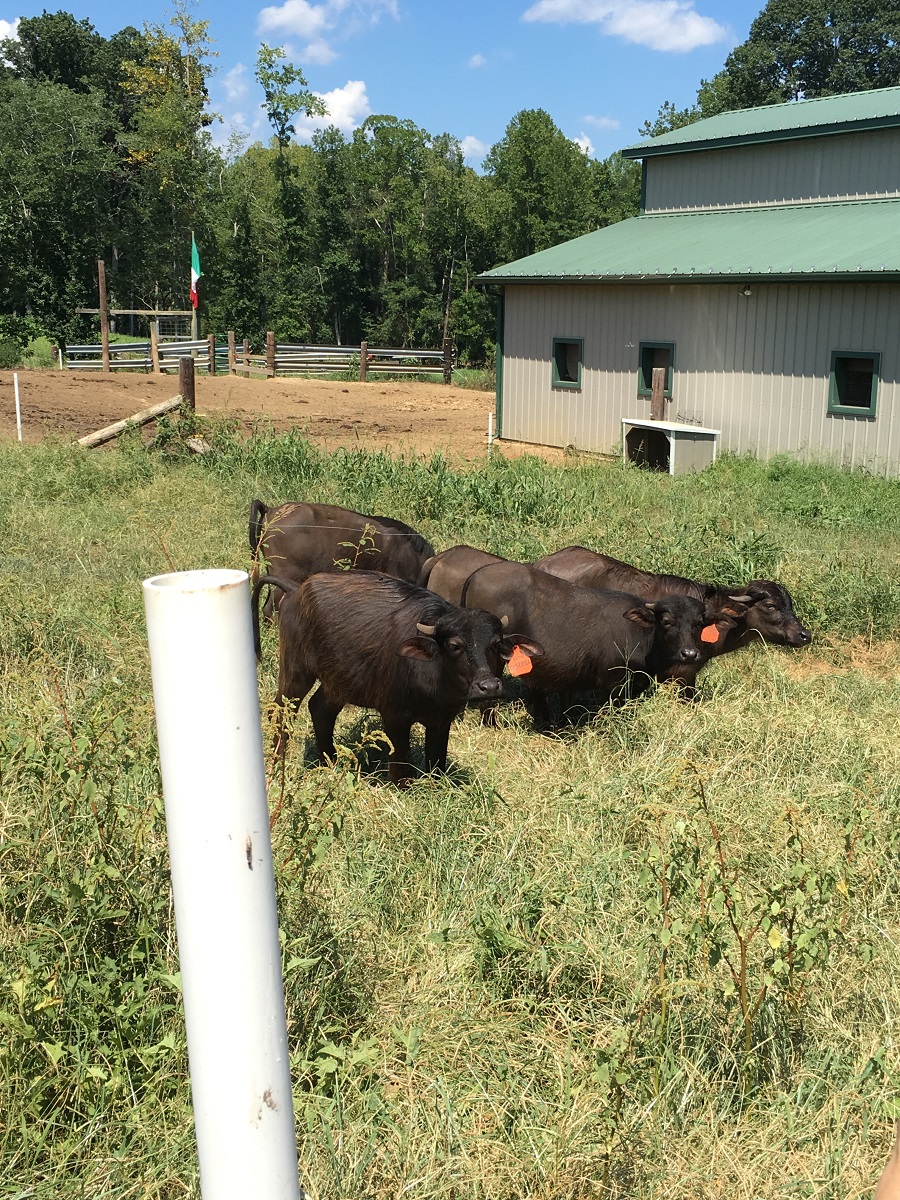 They walked us through the process of how they turn the milk into cheese, and how long they age the cheese for. They also talked about the necessary temperatures for heating the water, cooling the water, and checking pH. Mold and bacteria levels are vital to control when making cheese. 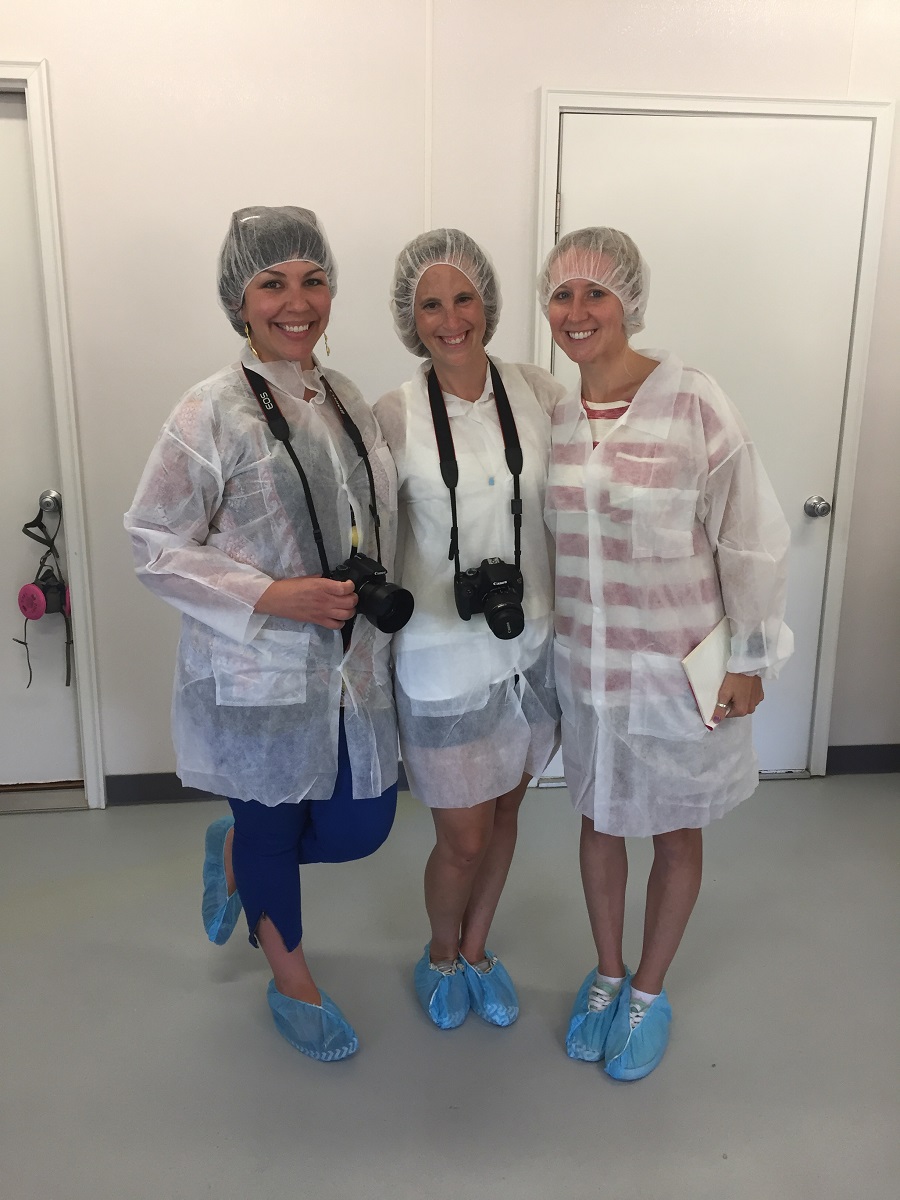 They age their cheese in a special, climate controlled closet! 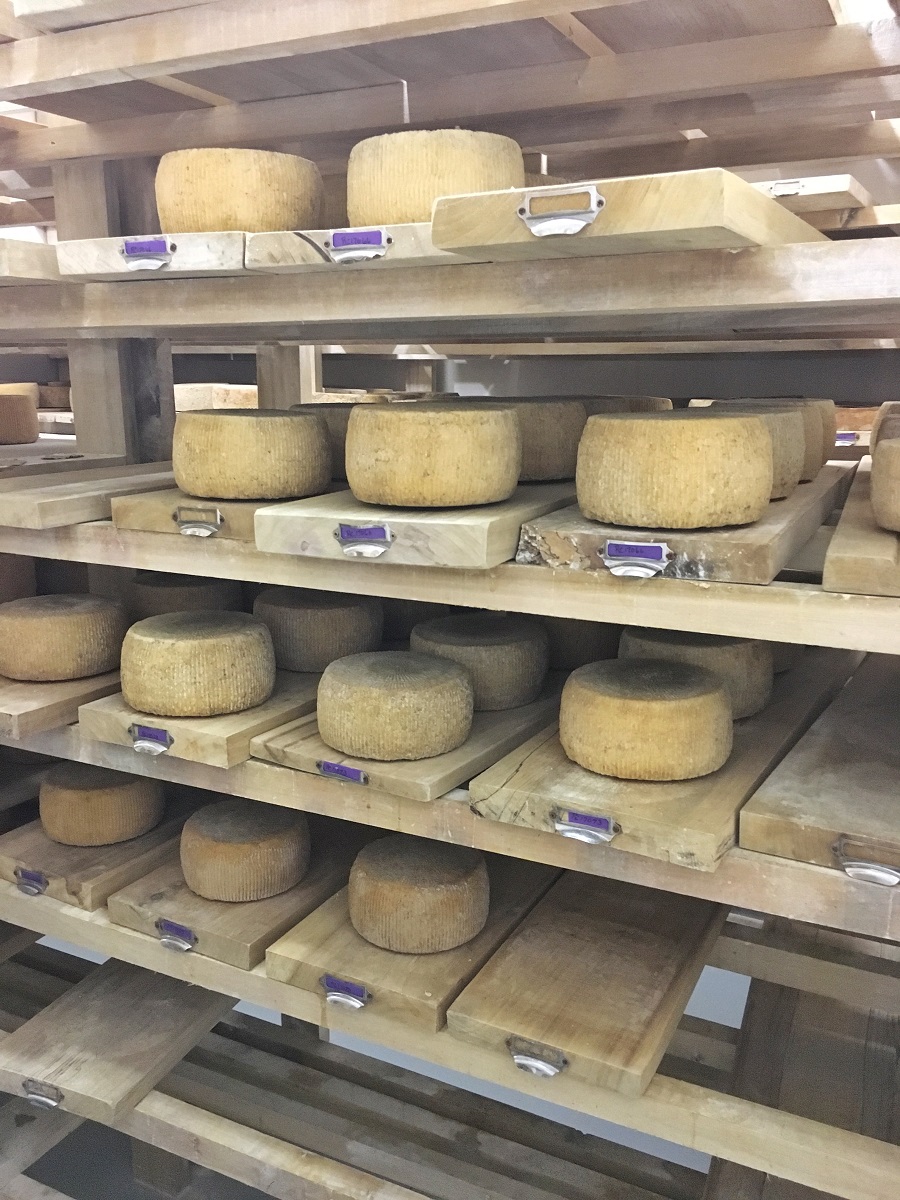 We got to try 3 different varieties of water buffalo cheese – hard to pick, but I think the sapore was my favorite. They all had a perfect saltiness to them, like mozzarella, but kinda reminded me of goat cheese too. And, I learned that they actually come to my local Farmer’s Market, so I will continue to purchase their cheese there! 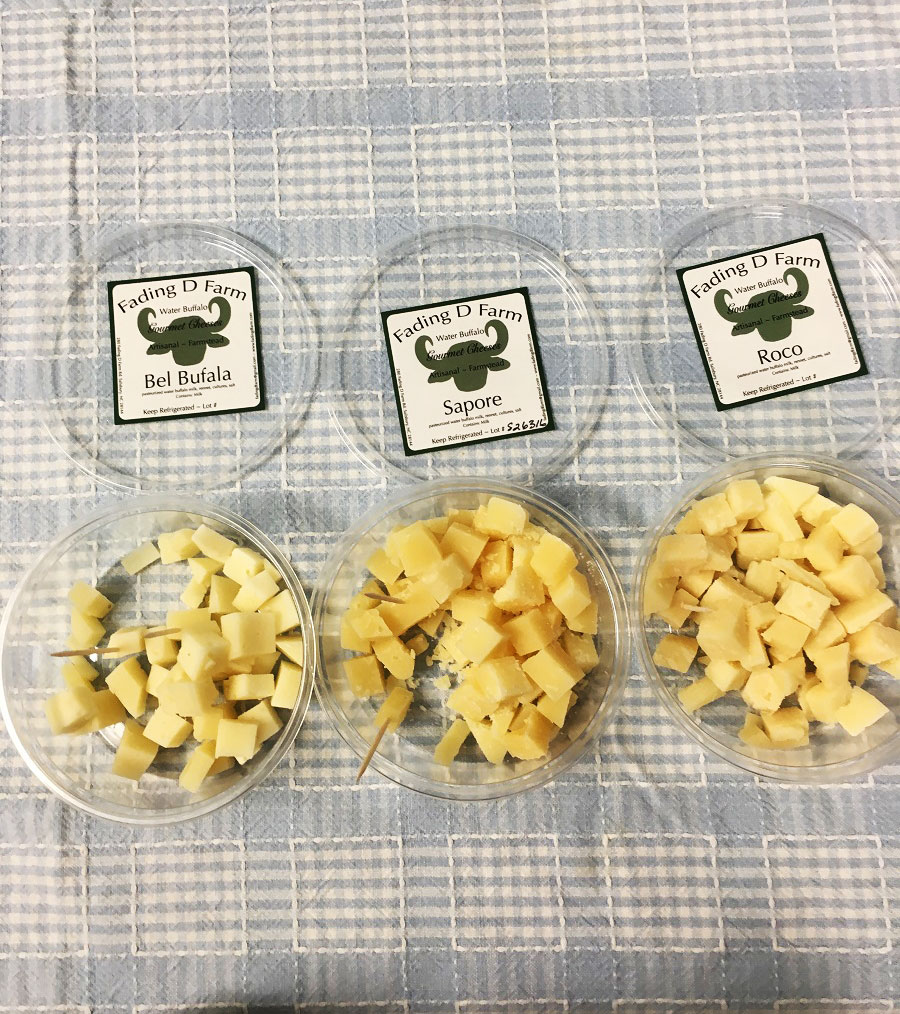 From there, we headed to the Highland Avenue Restaurant in Hickory for dinner. Hickory is about an hour away from Charlotte, and I had never been to this restaurant. The restaurant is in an old mill, so it has rustic and mill-town vibes, combined with an open and airy environment. While you would describe their menu as “farm to table,” the chef described it as “farm to friends,” which I really love. They list where they get their local produce from. 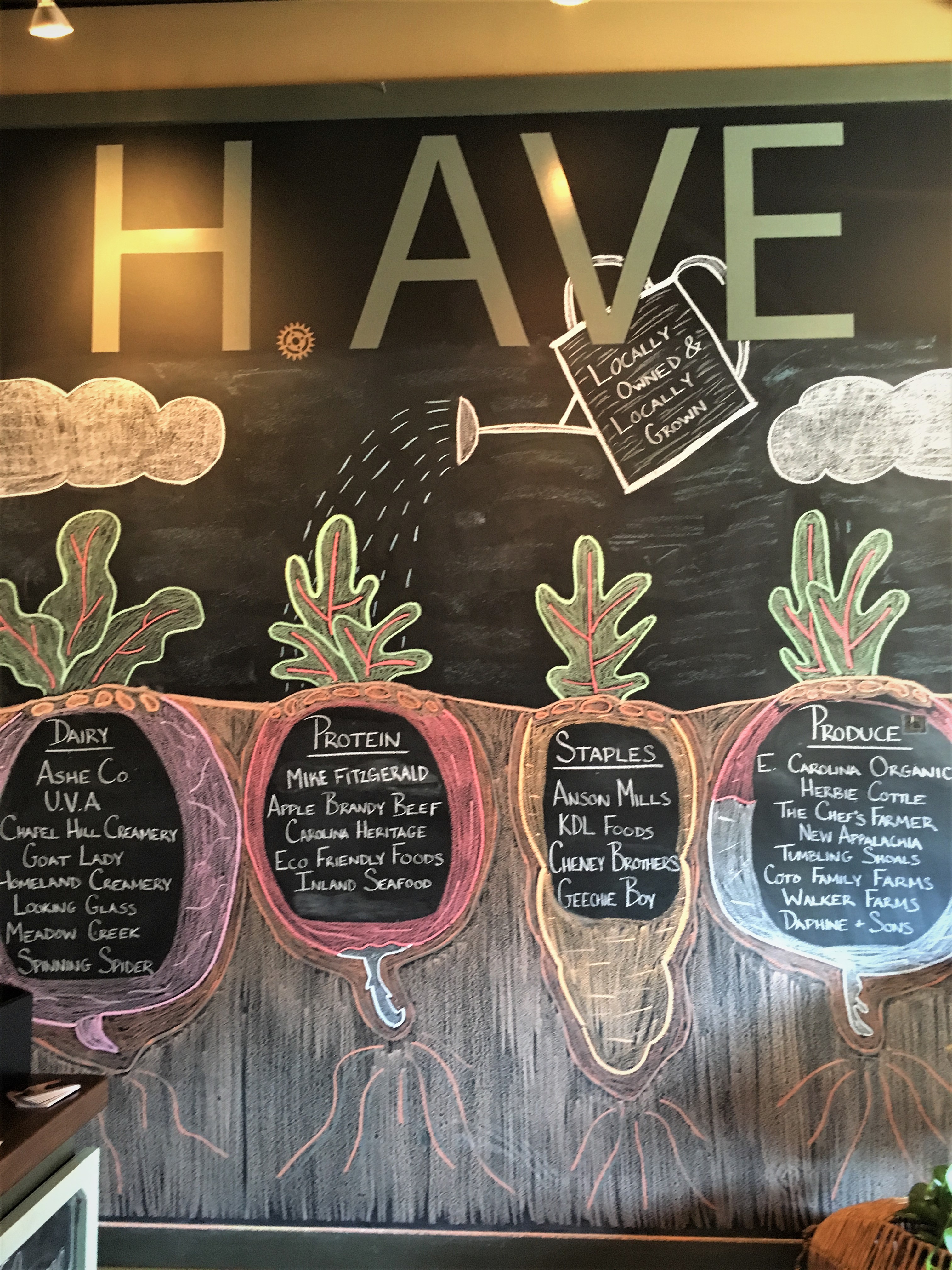 And how can you not love a restaurant with this décor? The bar was one of the most beautiful I’ve seen. Love the open area and set up. 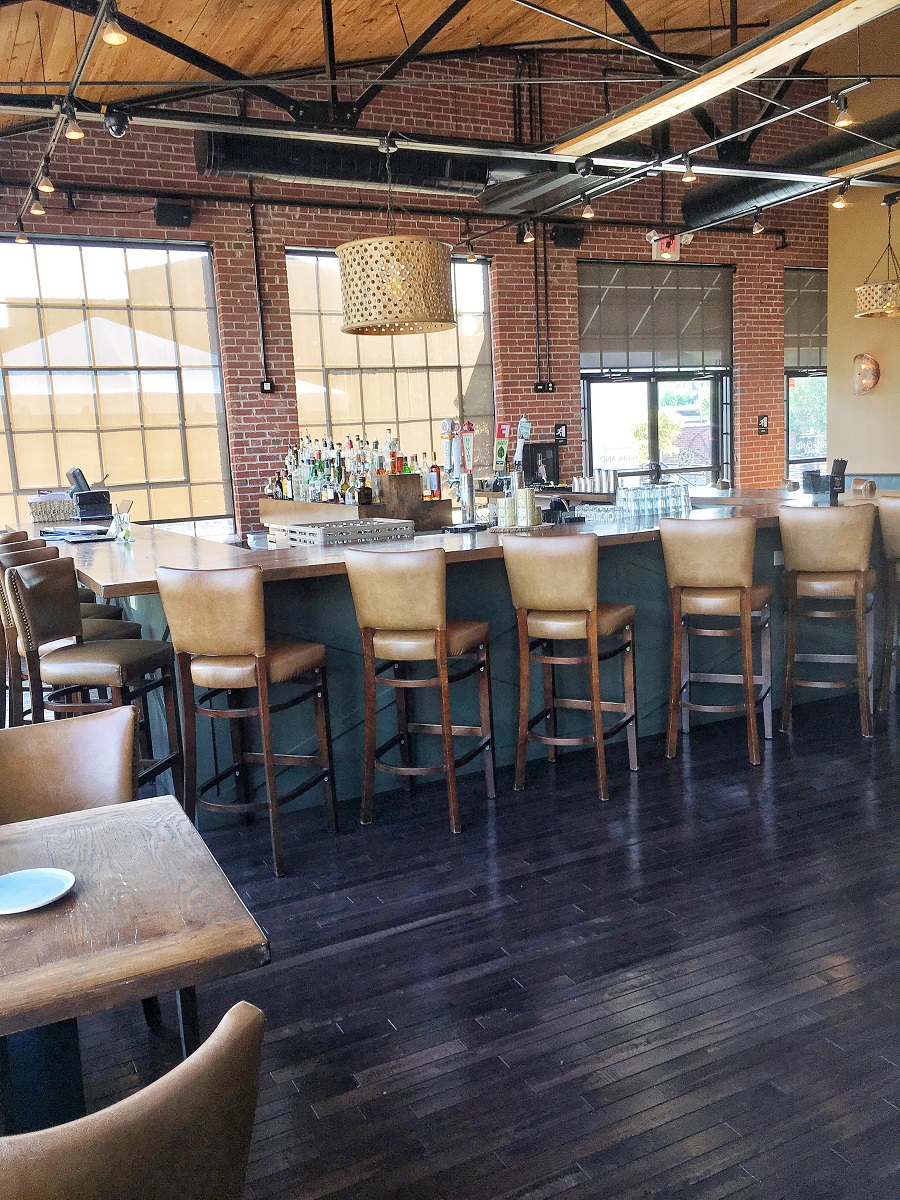 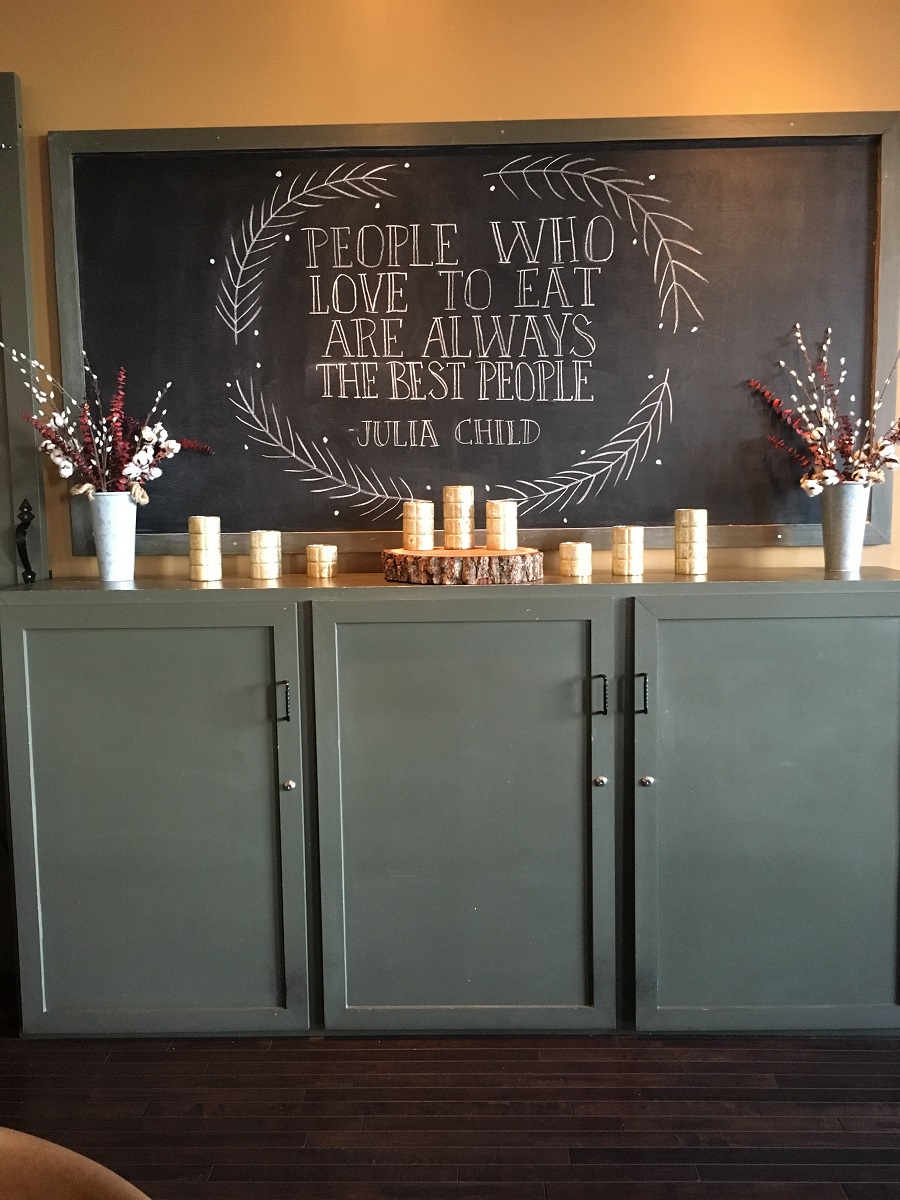 Their motto on food is that they won’t use it if it’s not in season – so you won’t see tomatoes on the menu if it’s not summer. Everything about our dinner was amazing. I think the funniest part that we all look back laughing about was that when the food was delivered, we all had our cameras out to photograph everything. I can only imagine what the other diners were thinking. 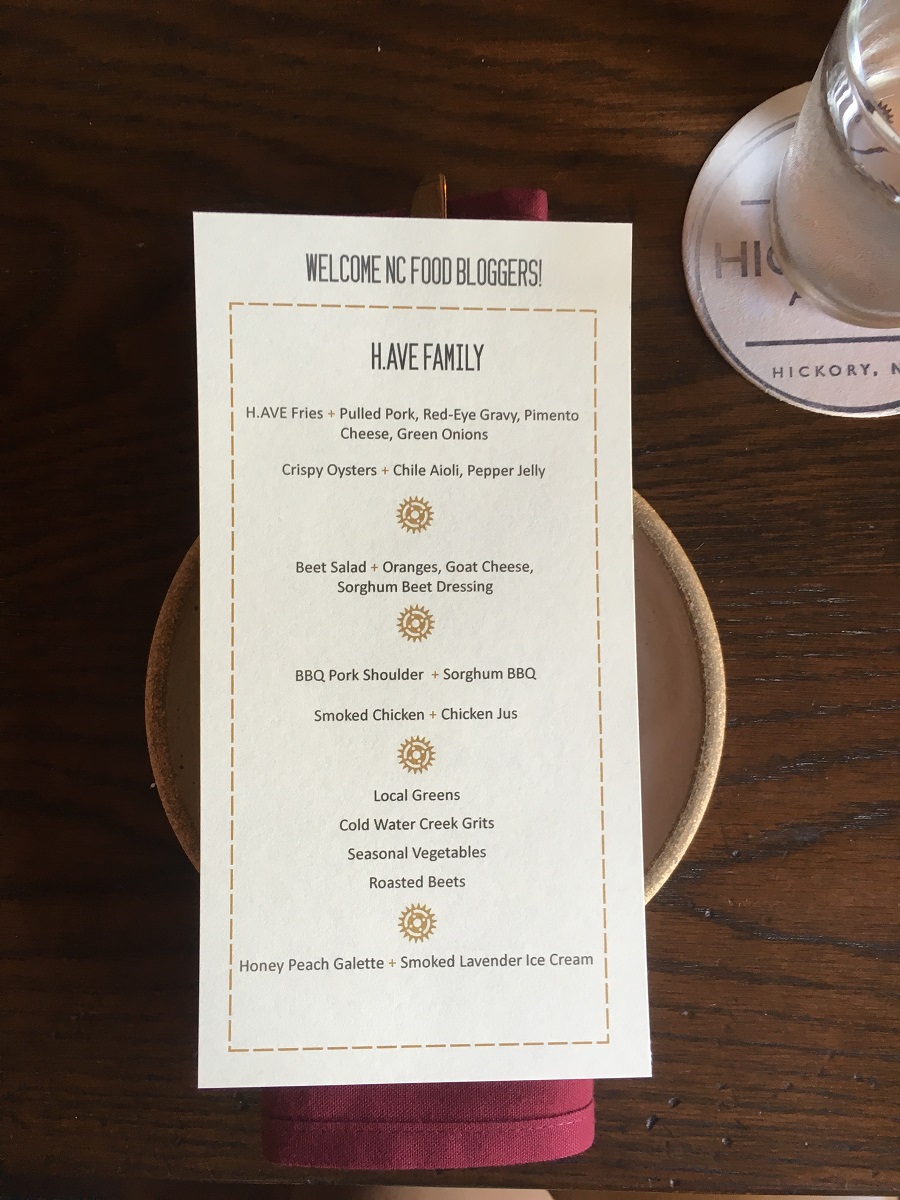 We started with fries with pulled pork, gravy, pimento cheese and green onions. These fries weren’t as rich as they sound but they were very addicting. We also tried some crispy oysters before munching on pork shoulder with sorghum BBQ and smoked chicken for our entrees. Typical southern meal, served with kale, roasted beets and grits. Everything was delicious, and I was especially smitten’ over the roasted beets. 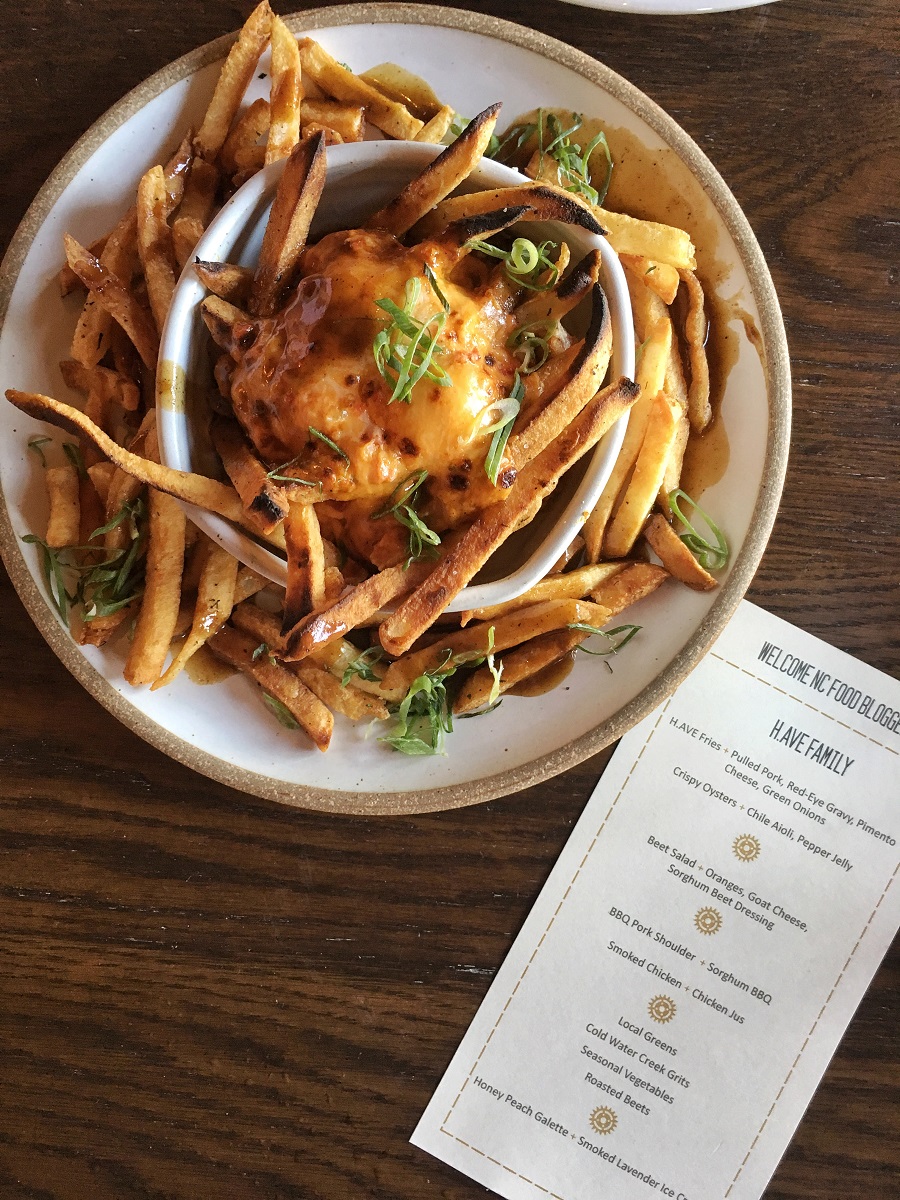 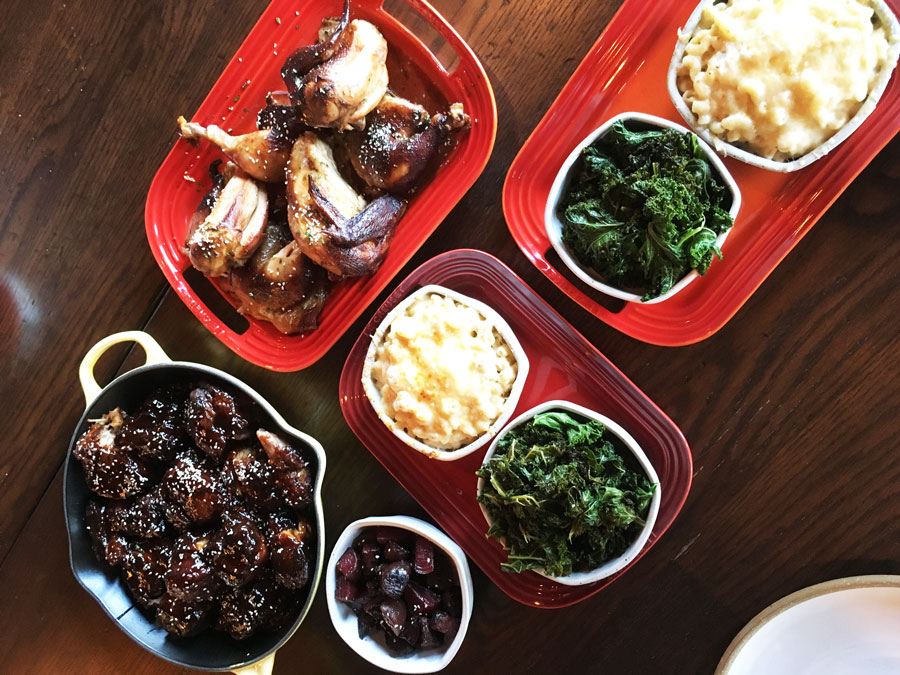 And, as if we weren’t full to the brim, we concluded with a honey peach galette dessert with smoked lavender ice cream. The flaky crust plus the melted lavender ice cream was purely outstanding. I didn’t think I had room in my stomach but my body is always surprising me 🙂 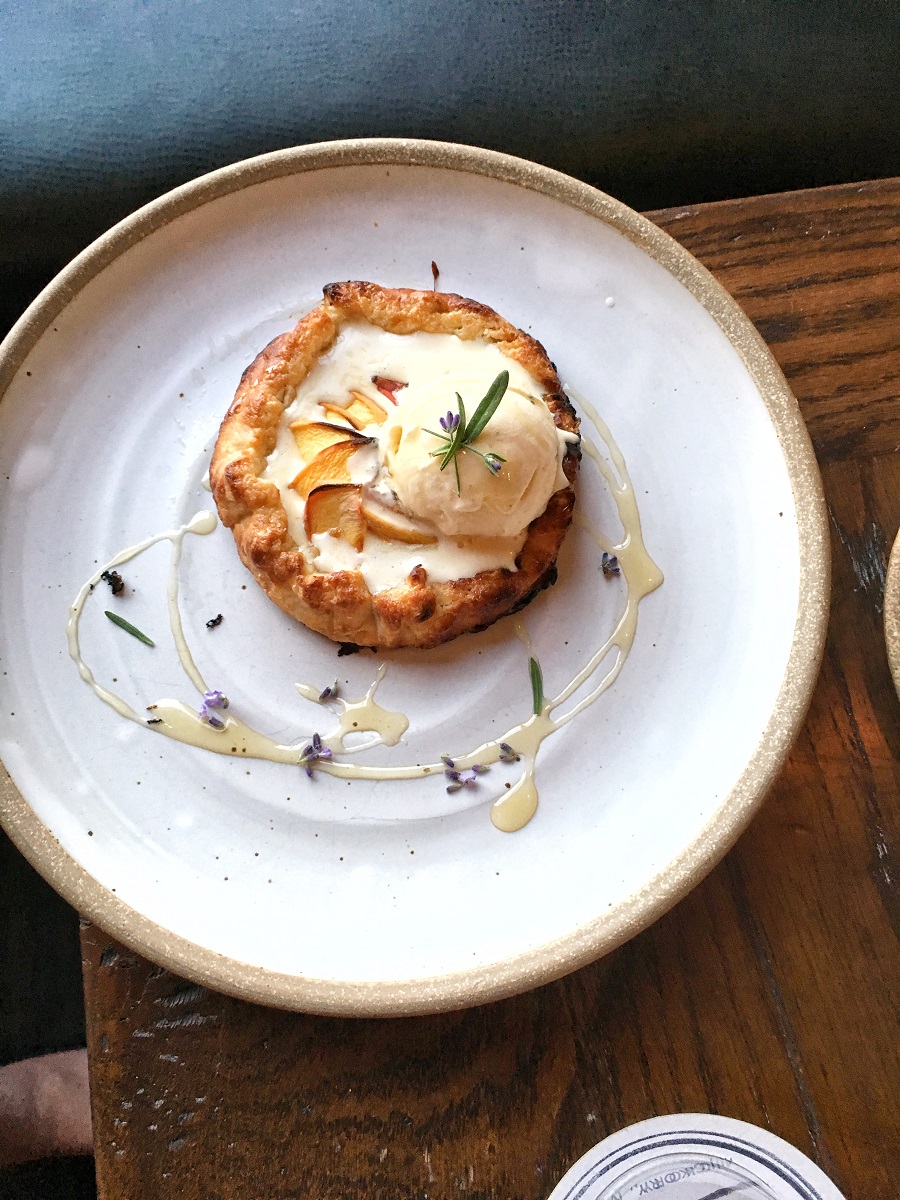 We left Highland Avenue feeling pleasantly full before checking into our accommodations for the weekend through the Asheville Bed and Breakfast Association. They creatively paired the bloggers to different inn’s based on our blogs and our interests. I will share more about where I stayed in the next post.

After breakfast on Thursday morning, we were off to the Pisgah Brewing Company in Black Mountain. Pisgah started in 2005, and specializes in craft beer with 100% whole leaf hops, organic grains and malts. They grow their hops outside! They are still rather small and local, producing about 5,000 barrels a year. What I found so interesting is how important and pure the water source must be for brewing. Black Mountain has access to the pristine North Fork Water Reserve, which explains why Asheville has so many craft breweries. 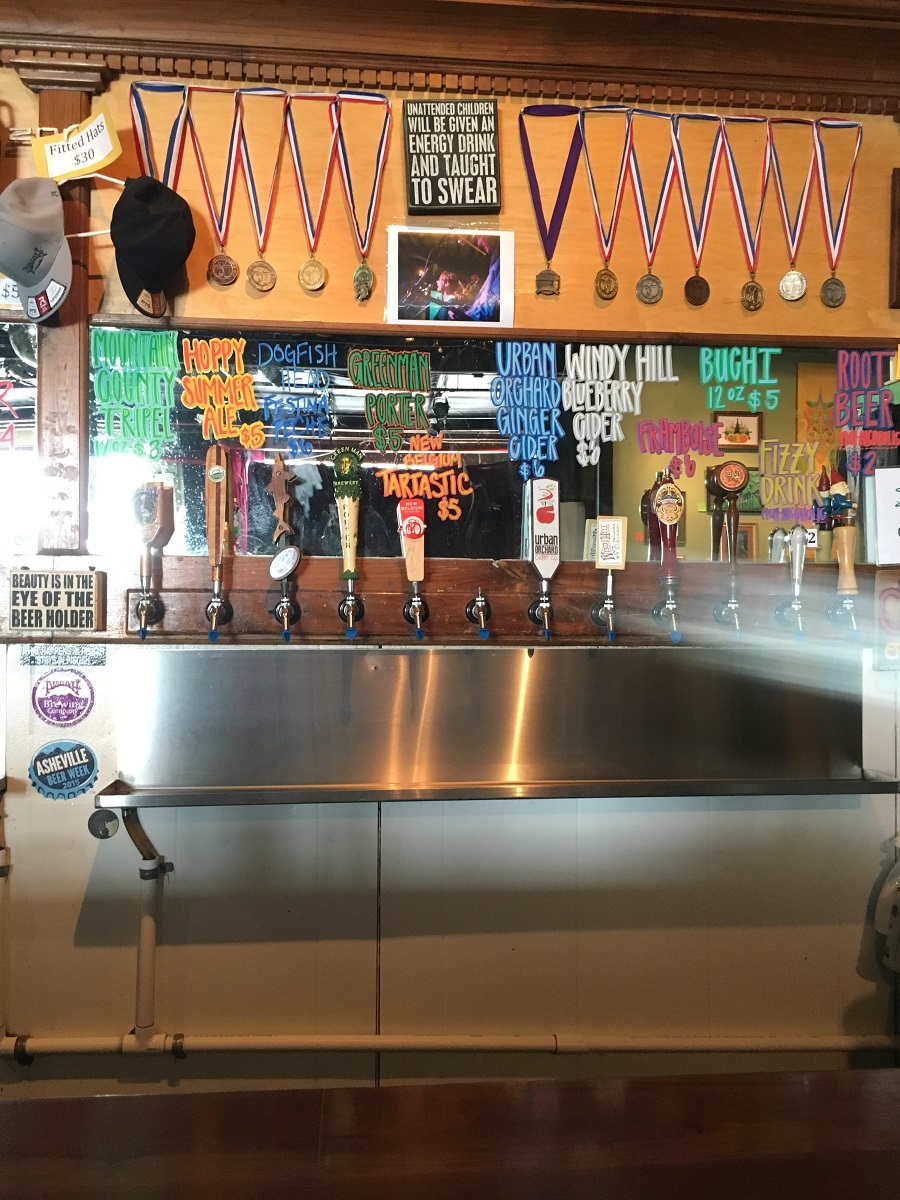 Here’s a little hop from their “beer garden!” 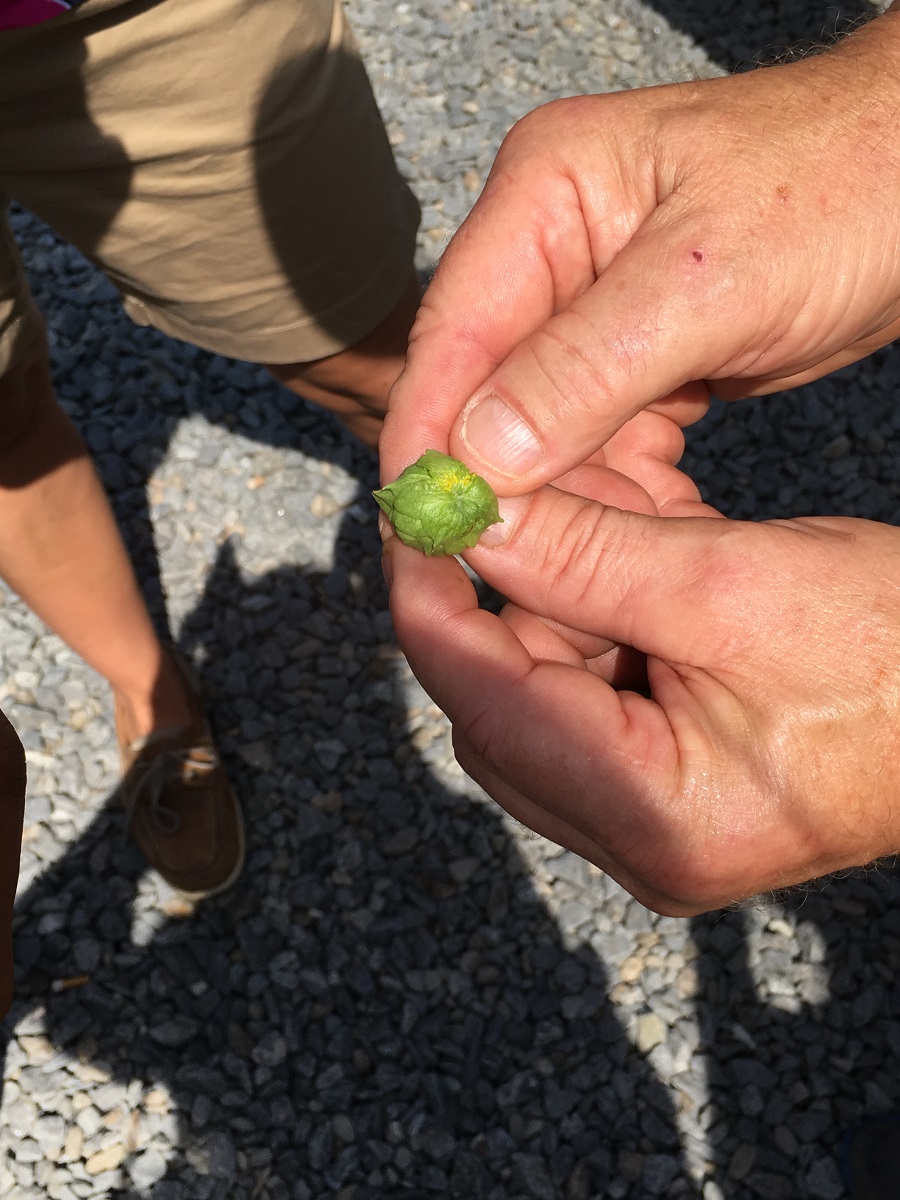 Pisgah also has an outdoor space that can hold upwards of 2500 people for concerts and events. 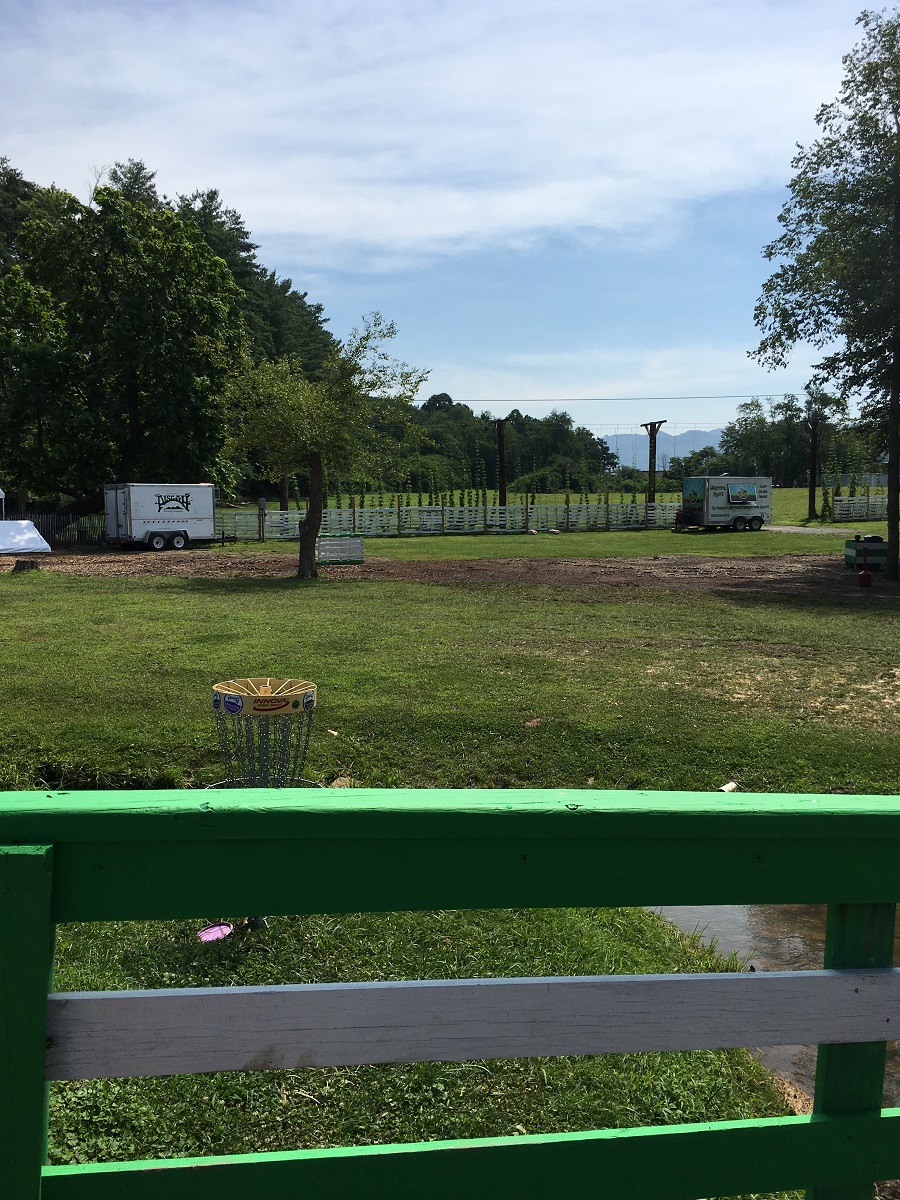 Right next door to Pisgah Brewing is the office for New Sprout Organic Farms. Below is a picture of the owner and his son. 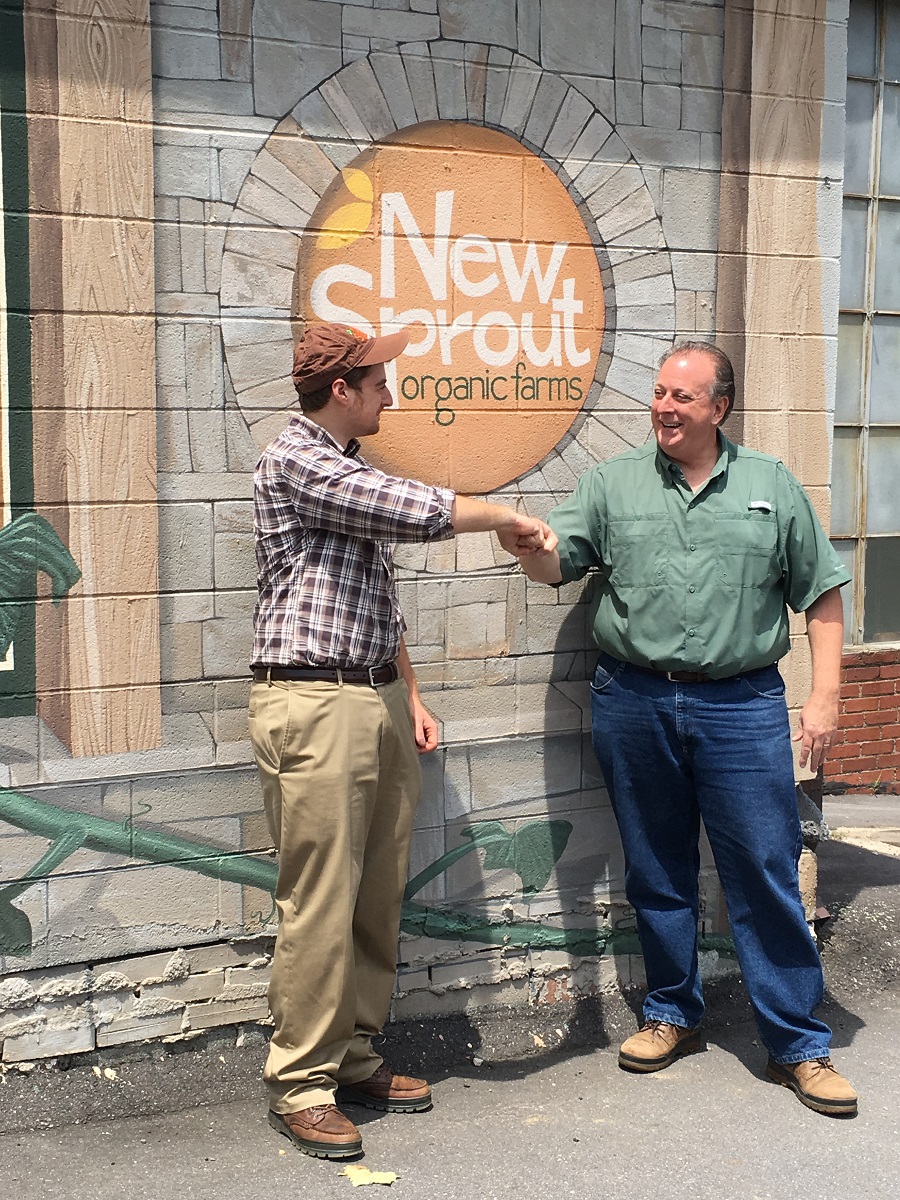 The idea behind this farm system is so unique, and has great family ties. Essentially, Jill and Alan Rose founded the farm in 2011 after semi-retiring from previous corporate jobs. Their two sons had been going to summer camps and came back with a deep appreciation for local and organic food. They realized how different real food made them feel verses than the typical chicken nuggets and fries served at camp.

So, Alan and Jill did some research and came up with New Sprouts Organic Farm – a farm that grows, packs and ships certified organic fruits and veggies. They source produce from organic farms in the Asheville area, and deliver it to grocery stores throughout the southeast (Whole Foods, Earth Fare, Harris Teeter, Ingles are some of them). They also make sure the farmers get their fair share of payment. New Sprouts is certified Organic and GAPS (Good Agricultural Practices) certified, both of which are voluntary certifications that take a require time, audits and fees. 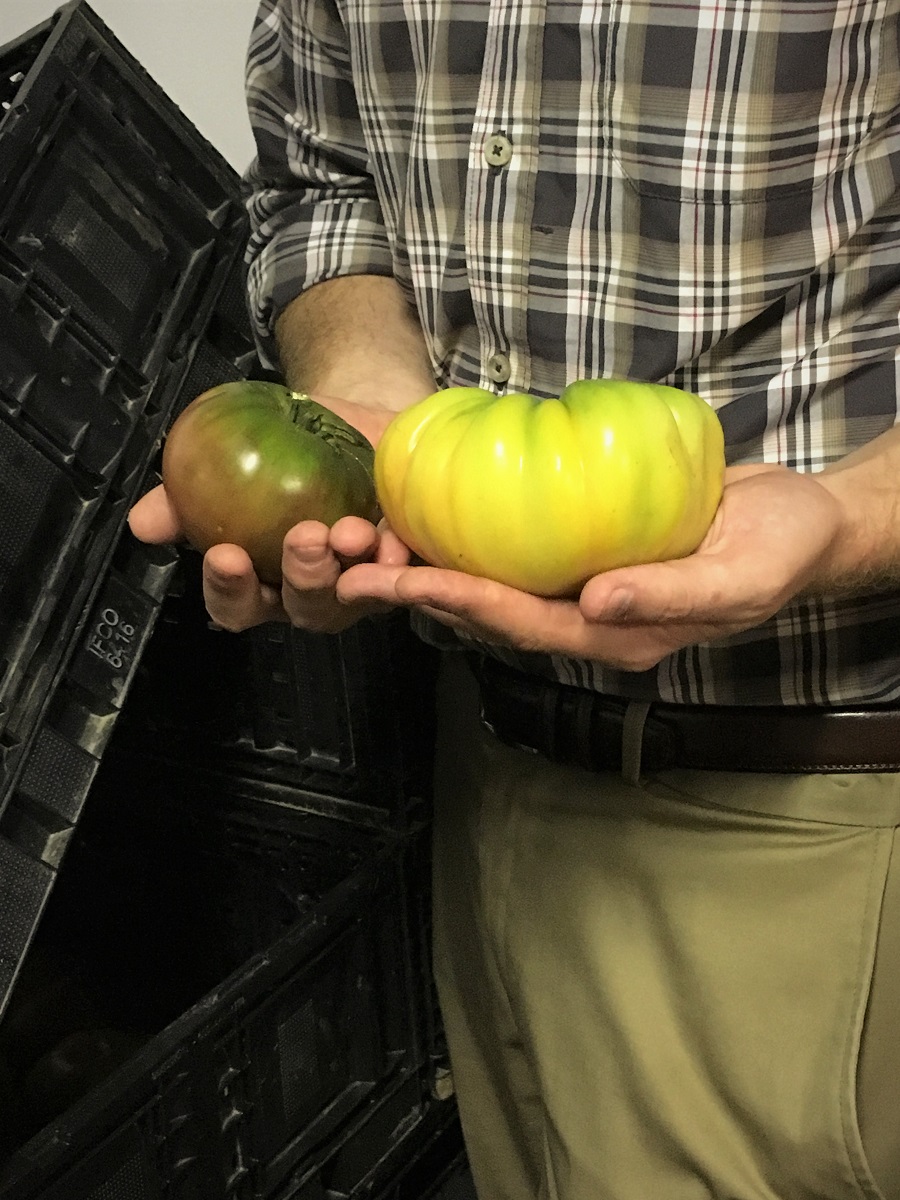 Have you ever gone to your local grocery store and found the only produce options were from the west coast or Mexico? This is one of the things New Sprouts has changed. By creating a network of growers, New Sprouts picks up the crops from farmers throughout the Southeast and brings it to local grocery stores. Therefore, consumers can eat produce that was grown just miles away from them. It has helped improve food accessibility, and greatly helped the farmers make money. In other words, New Sprouts supports regional growers with logistics, marketing, sales, and packaging so all the farmers have to think about is farming!

Since 2011, New Sprouts Organic Farms has grown exponentially, from growing organic produce on 20 acres in Black Mountain to expanding to 50 acres! They have developed a network grower relationships in Florida, Alabama, South Carolina and Georgia. I really enjoyed seeing how committed their company is to the relationships involved in organic farming. The relationships (with organic farmers only) are what keep the jobs maintainable for the farmers, so I really appreciate their emphasis on this.

We got to meet one of the farmers, Steven, and see one of the fields. They were just finishing up turning over summer squash (these were the “reject” crops). 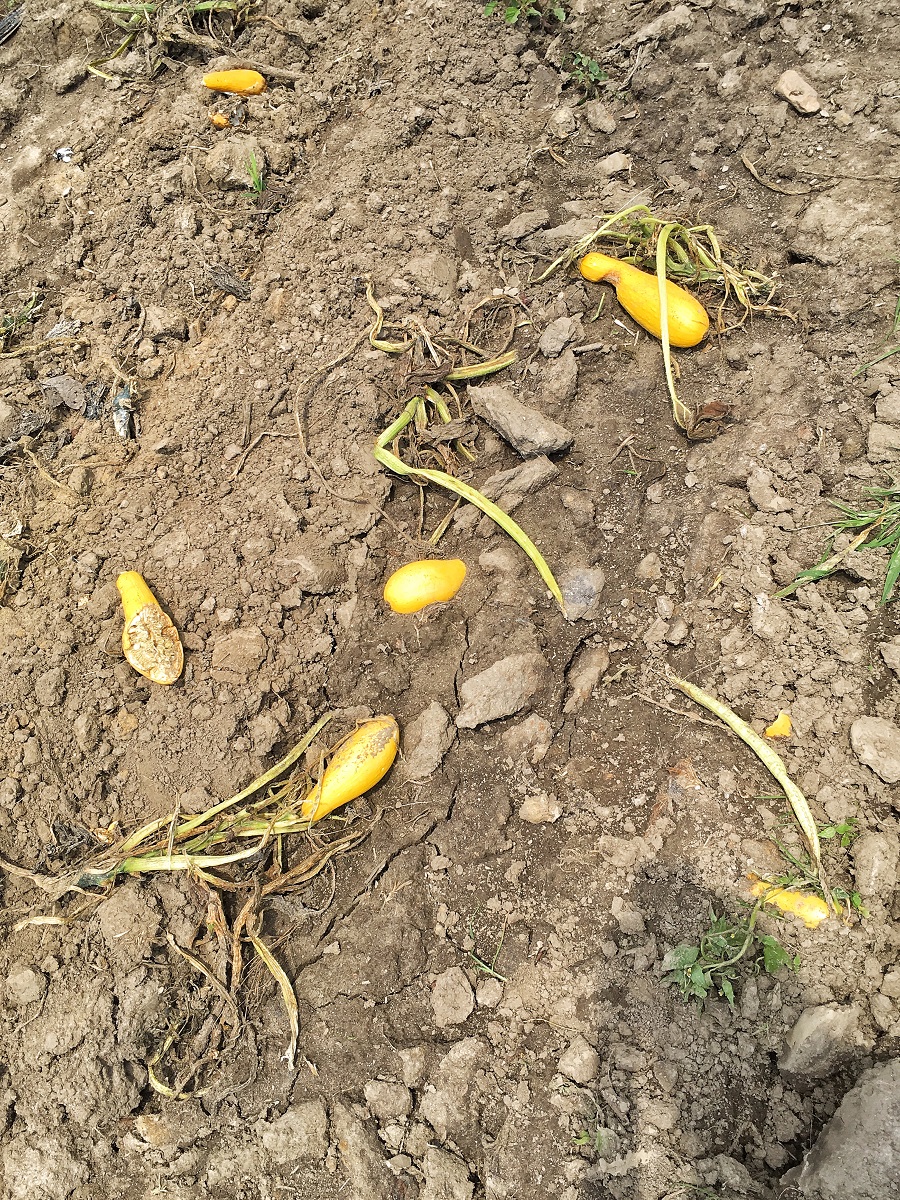 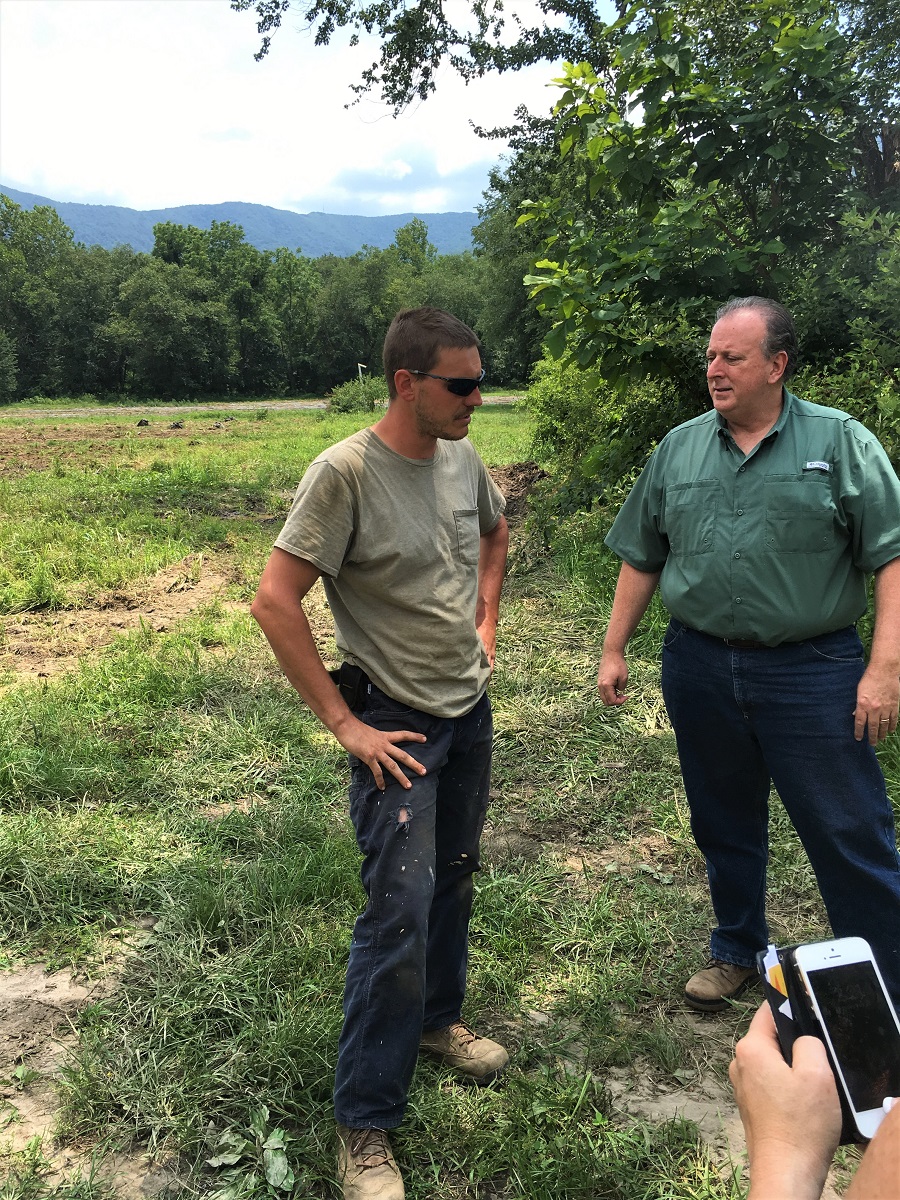 And we got a group photo. We loved learning about the impact these people are making in their community! 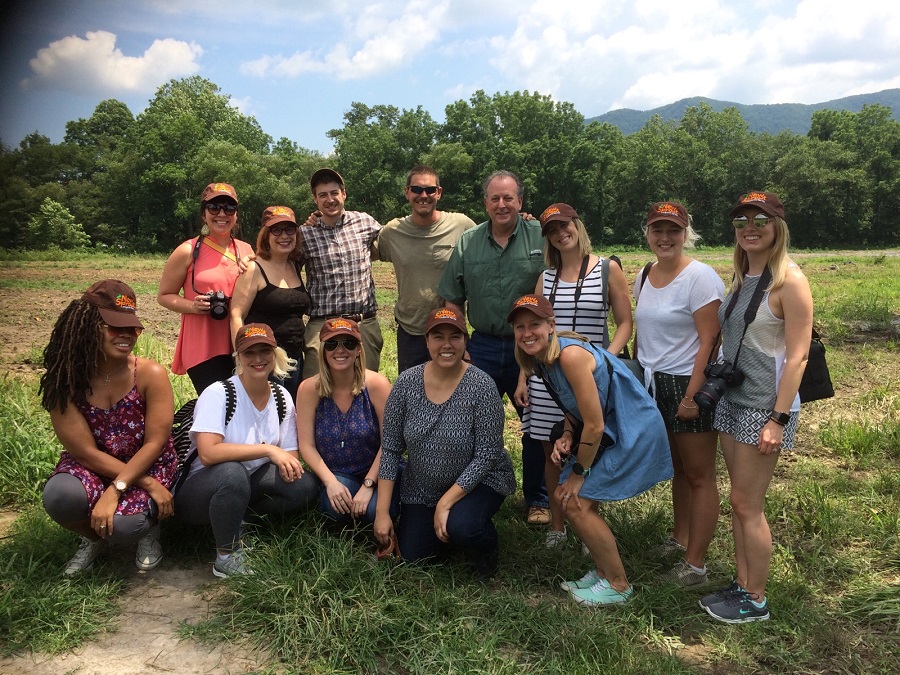 Overall, these experiences have been really eye opening in thinking about how food gets from the farms to the grocery store, or the restaurant you eat at. I hadn’t really thought about this before! It makes so much sense to have a “middle man” to help both sides out.

I’ll save the rest of our adventures for part 2 – where you can see me picking tomatoes and planting cabbage!

Have you ever toured a farm or tried water buffalo cheese? (if not, you should!)

For part 2 of the Farm Tour Recap, click here!

8 responses to “What I Learned About Water Buffalo Cheese and Organic Farming!”