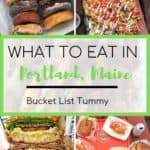 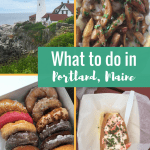 It’s been a crazy week (always seems to be) after returning from Portland, Maine. But, I’m happy to say we survived the plane rides and Camryn was pretty well behaved.

I was very nervous and anxious about our first travel experience with a baby and maybe I’ll do a future post with some tips on what I think helped. We also overpacked, so now I’ll be better prepared to carry LESS next time.

While I always feel like I’d rather have something than miss it, I’m working on being more minimal.

How To Spend a Weekend in Portland Maine

If you have any ambitions of exploring Portland, Maine, here’s our mini itinerary from the weekend. Also, if you need tips on how to travel with a baby, I wrote a whole post on some of our experiences. We arrived on Friday afternoon. The drive from Rhode Island to Portland, Maine, was about 3-3 1/2 hours, but we made a pit stop in New Hampshire so Cam could meet my grandma, her great-grandmother.

Such a special moment, I am so happy she got to meet her. We rented an Air Bnb in South Portland, which turned out to be a great location. I think we were about 3 miles from downtown Portland.

There were 8 of us total (9 if you count Cam) staying in the house – my parents, my sister and her fiance, my brother and his girlfriend, and Ed, myself and Camryn.

Once we all arrived, Friday was a chill night and we just made dinner at the house – lasagna and a salad. My sister and Ed were both running the half marathon on Saturday morning so it was an early night.

However, if you are interested in nightlife activities, I’ve heard great things about Novare Res Bier Cafe, which has German inspiration and many locally crafted beer options. Also, Central Provisions for small plates and cocktails.

Race day! I actually did not get to see the race, which was a little sad. I usually love to watch Ed race and was looking forward to seeing my sister’s first half.

But the race started at 7, which is right smack in the middle of when I usually feed Cam. And logistics would have been tough – getting her in the stroller to watch in the rain. It just didn’t make sense.

Instead, I had a slow morning with lots of coffee. We all just hung around for the early part of the afternoon, and went for a walk around the neighborhood.

Then, we decided to check out Bissel Brothers Brewery – a few people had recommended this place. For those with babies, I just took Cam in and left her in the carseat. It was so crowded, but somehow, Cam managed to sleep through it all.

We also split some delicious nachos before heading out to a 4:30 trolley tour around Portland. Bissel Brothers was a very fun hangout spot. Next up was a tour of the city!

I love tours because I love learning about the history of a city, plus it helps me get my bearing a little better. Ed and I definitely want to go back in the future when Cam’s a little bit older to do some more exploring.

Plus, Acadia National Park has been on my bucket list forever.

After the trolley tour, we had an early dinner at Fore Street. Apparently, you have to make reservations months in advance – fortunately, my sister was all over it!

The food was delicious – my brother and I went halfsies on salmon and scallops. I did not take any photos of the food because it was a really nice restaurant and I was also holding Cam for most of it.

The restaurant did let us bring her stroller in, so I kept that at the end of the table near me.

We celebrated my mom’s birthday with a delicious Strawberry Shortcake Dessert! Everything worked out fine with Cam – we all passed her around trying to feed her a bottle.

We’re still struggling on that front. On Sunday, I decided I wanted to try a breakfast sandwich from a little cafe down the road, Omi.

I got an egg, sausage, spinach, + tomato on a homemade biscuit with hot sauce and it was delish. I just love love breakfast sandwiches and love trying new takes on them. After breakfast, we headed to explore Cape Elizabeth and ended up at Fort Williams.

We saw the North Portland Lighthouse and got lobster rolls from Bite of Maine food truck that my friend had recommended.

We camped out at a picnic table for a few hours (you could BYOB, too), so I did have to feed Cam once. It was a little windy so I just went back to the car and fed her there. The lobster rolls were delicious! I went with the lobster BLT. You could also get the traditional Maine one (with mayo and chives) or the Connecticut style with butter. I tried both and would have trouble picking what I liked best. Both were tasty in their own way! Since we had been out all day, I figured dinner to go or at home would be best for Cam. Duckfat came highly recommended so we got Duckfat to go.

I think it’s actually the best way to experience it if you don’t want to wait hours and hours in line, which just isn’t possible with a baby.

They are known for their fries being cooked in duck fat. Obvs, we split the belgian fries and some poutine fries.

Then, we all got an array of sandwiches that we split and we made a salad at home to pair it all with. Then after dinner, we walked down the street for ice cream at Willard Scoops.

They had some awesome flavors – chocolate sea salt, thin mint, coffee oreo (game changer), brownie sundae were the ones I tried. I went with coffee oreo in a cone and all was right in the world. We headed out on Monday morning but not before grabbing some donuts on Holy Donut. What makes them special is that they are made with Maine potatoes!

My favorite flavor, hands down, was the chocolate sea salt. I had my own little sampler plate so I could try them all, so don’t worry, I did my research before giving you that recommendation!

The coconut one was surprisingly good and was vegan. They had a few vegan options! Then, we drove back to RI where Ed, Cam and I stayed the night, and flew out on Tuesday morning back home to Charlotte.

A quick, busy weekend but a fun one. And I’m glad we have Cam’s first travel trip under our belts – we’re due to fly up to RI again in late July for a wedding.

Have you ever had a potato donut? Poutine fries?

How do you like your lobster roll? Butter, Mayo?

Sarah Schlichter is a Registered Dietitian with a Master’s in Public Health Nutrition. She specializes in sports nutrition and intuitive eating, and recipe development. She also co-hosts the podcast, Nail Your Nutrition.
15 Comments
Join The Conversation