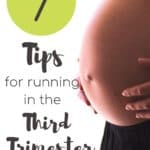 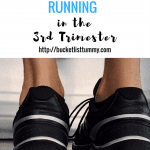 Well, here we are running in the 3rd trimester and I’m making sure I have all of my meal prep for baby done and have made many of my freezer meals for new moms.

Running third trimester style is much different than normal running.

I’ve certainly had to make plenty of adjustments to my form in many ways, but it’s been my sanity release to still be running in the third trimester.

I still think pregnancy running is ironic because I’ve found so many similarities between the two. Running during pregnancy was a natural thing for me during my first two, though less so during my third pregnancy.

Nonetheless, third trimester exercise can get uncomfortable, and yes, running while pregnant in the 3rd trimester is extremely tiring.

Running in Third Trimester: How I’m Doing It

Another thing that can help? A belly band for running during pregnancy. It prevents your belly from too much slushing up and down and really cuts down on discomfort.

I want to reiterate that I am not running excessively or pushing myself beyond my limits. If anything, pregnancy has certainly been a lesson in listening to my body (physically, mentally and emotionally).

In fact, I’ve heard about running stomach during pregnancy 3rd trimester for many women. Fortunately, I didn’t have those symptoms, maybe because I was taking it easy.

And I realize not every woman will even want to run throughout pregnancy and that may be the healthiest decision for their physical and mental health.

But, hopefully you can relate to having something you enjoy – whether it’s a form of exercise or just walking. Some outlet that you can turn to.

And more likely than not, things will have to be adjusted as you progress in your pregnancy.

Is Running During Pregnancy Safe?

I always recommend consulting with your individual therapist before engaging in any sort of treatment plan or exercise.

Running with pelvic floor dysfunction is a recipe for disaster, and may ruin your running further into your career, even if you aren’t seeing the effects now.

That line of thinking is what I really had to remind myself earlier on when I wanted to get back to running but I knew my body wasn’t ready yet.

We also had some wonderful discussions on the Nail Your Nutrition podcast with professionals in these areas, such as Abby Bales, a doctor of Physical Therapy, and Jessica Valant.

I recommend checking those out for more details on what they had to say about strengthening your pelvic floor, since they are the experts!

My Running During Pregnancy Experience

To me, running and pregnancy have lots of parallels – both journeys can be long!

However, I was very active during both pregnancies, and have written about exercise and running during pregnancy many times on the blog.

I ran during pregnancy with Camryn and about 28-30 weeks with Hannah.

Running during pregnancy in the first trimester is generally the easiest, as I ran (part of) the Disney marathon with Hannah as a little bean in my belly.

However, running did change for me (as expected), as my belly got bigger, my center of gravity shifted, and frankly, my energy changed. Especially in those summer months and heat!

First of all, knowing the changes that pregnancy brings is important. If you remember, feeling short of breath was one of the early signs I had that I was pregnant.

This was before I was having positive pregnancy tests, but my body was changing.

Running had suddenly gotten harder because my body was already adjusting to the changes made during pregnancy, and running while pregnant.

Aside from that, there are many other changes that happen during pregnancy.

Some of these may affect certain women more than others.

The most important lesson I’ve learned is to listen to my body, and that’s not just limited to running in the third trimester. Similar to gentle nutrition during pregnancy, it’s gentle exercise.

Setting pre-determined running or workout goals in my head and then going and doing them are now two different things.

For example, while I love my pyramid workout, there’s no way I would attempt that in pregnancy, unless it was VERY modified.

I don’t “push through” the fatigue to get that 4-miler in, and if I’m just not feeling it, I take another rest day.

I’ve taken more rest days than I have in a long time.

I’m finding a good balance between movement and resting, and still at the point where I enjoy and look forward to my running time.

Foam rolling is my best friend and I can’t tell you how much foot cream I’ve gone through. More tips on foam rolling for runners here.

Here are some of the conclusions I’ve come to as far as the benefits of running during pregnancy and tips for running in the 3rd trimester.

Sometimes, that means just running loops around our neighborhood so I can stop and pee.

And as much as I hate running on the treadmill, it definitely has its perks for having a bathroom nearby.

The time I can hold my bladder after I start running is getting shorter and shorter. I can barely go over 20 minutes at this point.

Understanding your pelvic floor is paramount for pregnancy and postpartum…except no one talks about it.

I didn’t know about the pelvic floor during my first pregnancy, or even after having Camryn. I saw a PT once, but should have had continued care. Things were different in this postpartum running journey.

Seeing a pelvic floor therapist and investing in this postnatal program 100% made a difference in my pregnancy with Hannah, and I honestly credit it as a factor in my homebirth VBAC.

You really shouldn’t do any type of planks or crunches during pregnancy. For more information on that, listen to this podcast episode.

Invest in Good Socks and Shoes

Pregnancy is NOT the time to skimp on products.

I love feetures socks for running, but also these comfy funny pregnancy socks for lounging.

Also, compression socks can be a LIFESAVER for helping with blood flow and swelling that tends to happen.

You’ll also want a semi-firm shoe that can adjust to your foot shape (I love Altra’s) and handle the extra impact from running.

Release Your Pace and Intensity Expectations

This sounds obvious, but it’s still worth saying.

Your body when pregnant is functioning at a totally different capacity than when it’s not pregnant. It is prioritizing different systems and relaying things to the baby.

Therefore, you can just not expect to operate on the same level.

The extra weight, shortness of breath, and stride change will likely contribute to your decreased pace.

Coupled with the fact that you fatigue earlier because blood is being filtered to the little one makes it difficult to maintain high intensities.

I’m so glad I made the decision not to run the Boston Marathon , because I really think marathon training while pregnant would be terrible.

I know some women do it (and props to YOU who have/are doing it), but man, it would be so much time and discomfort.

I’m glad I can say I’m really enjoying most aspects of being pregnant, and I think marathon training would certainly be taking over or tainting that.

I’ve always had a good aerobic capacity and I feel that I was in good shape for the Ogden Marathon .

But, the shortness of breath is what alerted me that I was first pregnant.

I think I’ve gotten used to it now because I don’t seem to notice or focus on it too much. Even when lifting weights, I can hear and feel myself breathing heavier.

Also, carry extra water if you need it. It makes a huge difference to be hydrated vs. dehydrated, plus you have so much more mass and a little one to hydrate.

This is a safety measure. You’re at a higher risk being pregnant, and if something were to happen where you needed help immediately, you’d want to be able to get some.

Earlier in my pregnancy (I think it was 2-3 months), I took Tater out on a run. I ran from the house on a local greenway but just didn’t have the energy to make it back home after getting a mile and a half out.

So, I called Ed and he came and picked me up.

Fortunately, nothing more desperate or serious has happened, but I caution all women to run with their phones just in case.

A Road ID bracelet is a great idea, too.

Runners are tough, we are familiar with pain and grit. Like the last few minutes of a 5k, or pushing that final sprint of a half marathon. The pain fuels us.

I’ve experienced a different type of pain with pregnancy, though.

The soles of my feet hurt, so I wear thicker socks with my sneakers. This is honestly probably why I can’t run too far (this, and the peeing).

Otherwise, I feel pretty good when running when taking it slow and easy. I’m not sure if this is due to the extra weight, but the bottom of my feet tend to take a beating sometimes.

To deal with this, I’ve started running on dirt paths when I can.

Not trails necessarily, because there are so many sticks and roots that I could trip on, but just softer surfaces.

I’ve also experienced some back pain, as I’ve written about recently. I’ve found some relief with heating pads and epsom salt hot baths, but I don’t feel the pain when I’m running.

Normally, it’s when I’m sitting for too long, which is another sign to get up and move.

As I’ve mentioned earlier, you can’t expect your body to perform the same, even if you were in great shape pre-pregnancy.

Stopping to walk for minutes at a time does not mean you are out of shape or “weak.”

Instead, it means you are listening to the baby and your body. Your body is still appreciating the movement you are giving it.

Remember, your movement doesn’t have to be at 99% capacity and intensity for it to be beneficial.

I’m heading into 32 weeks. I don’t know how long I’ll continue to run during the third trimester, but will listen to my body to see.

Seeing a pelvic floor therapist may also be a good option for you during pregnancy, and definitely after pregnancy.

Even if it’s only 1-2 times a week, I’m thankful that pregnancy and even running in third trimester has further developed the relationship between my mind and body.

It has enhanced the connection to be able to listen to myself more. I’m also thankful that I’m able to move in a way that is enjoyable.

Sarah Schlichter is a Registered Dietitian with a Master’s in Public Health Nutrition. She specializes in sports nutrition and intuitive eating, and recipe development. She also co-hosts the podcast, Nail Your Nutrition.
27 Comments
Join The Conversation