And just like that, we’re two months shy of a year! I am head over heels in love with this girl. I never quite understood how people say you love your child/children more and more each day, but now I do.

It’s an unwavering, unrelenting, magical kind of pure love. I cherish each and every memory I make with her and she’s the best start and end to each and every day.

Looking back on old photos, it’s not just that she looks so much older (she does), but her hair has gotten so much lighter and longer.

It was a process I didn’t even realize was happening until I see how light blonde it is now. I had the same color hair as a child. 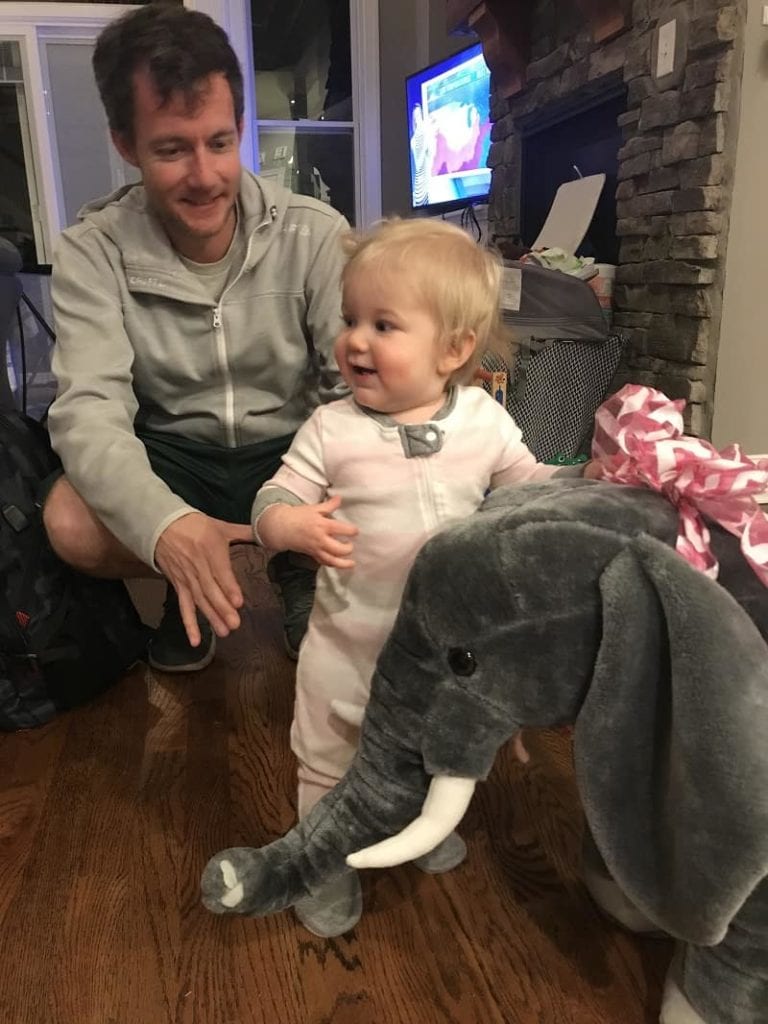 We’ve got 4 teeth (two top, two bottom). The top two have popped through in the last few weeks. The bottom ones came around Christmas. That was a tough time – traveling, sickness and teething.

She’s extremely mobile! She crawls everywhere and pulls to stand. She’s not walking yet, but I feel like she’s super close. A big update since the 8 month motherhood update.

She’ll stand unassisted, or take steps while holding on to the couch or something else. I think the steps are coming shortly and I’m not sure I’m ready!

Where to start? Camryn has such a fun personality. She gets excited about things and smiles really big and flaps her arms up and down. She giggles and it’s the cutest thing ever.

Right now, she is big on imitating everything I do, whether it’s a sound I make or a gesture. She’s recently nailed clapping and can wave hi and bye when prompted. 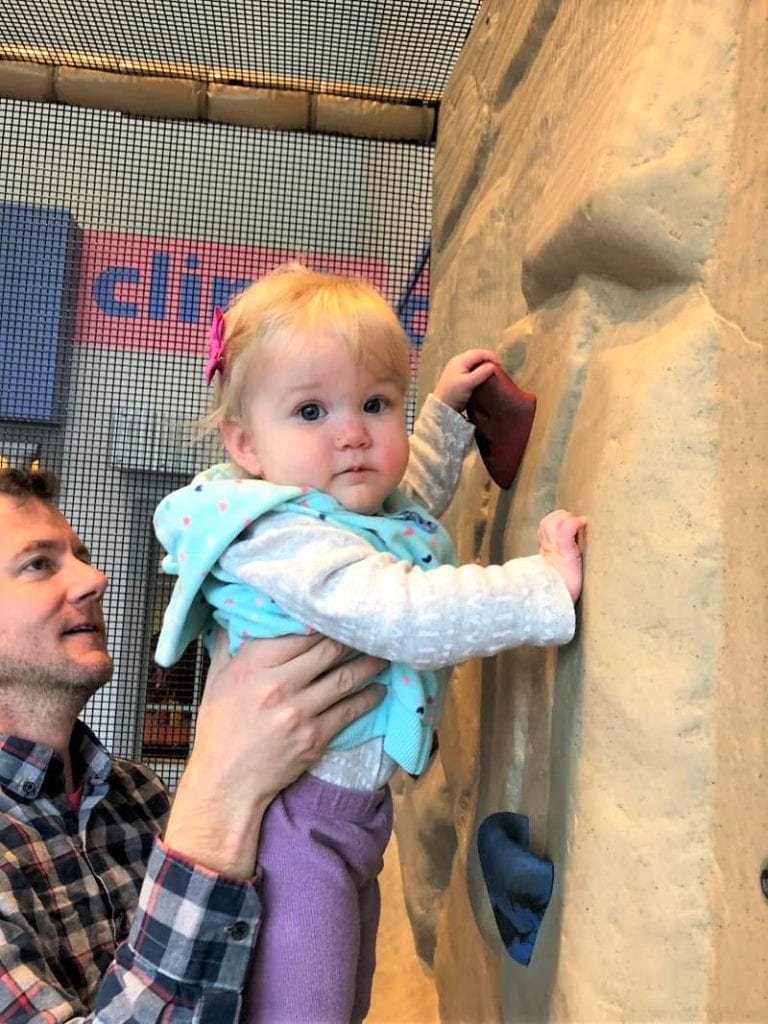 She sometimes has a little sass and I secretly love it. I can’t help but laugh when she has a little temper tantrum, and I know I’ll have to work on how I respond as she gets older. She loves to explore the world. Phones and remote controls are her favorites 🙂

Oh, and my breastpump. She loves that for some reason. I think it’s important that she can entertain herself, so in the morning when I make coffee and pump, she plays independently with some of her toys.

She loves the baby drum set (loves any sort of tapping and hitting things to make noise), this activity cube and these stacking cups. 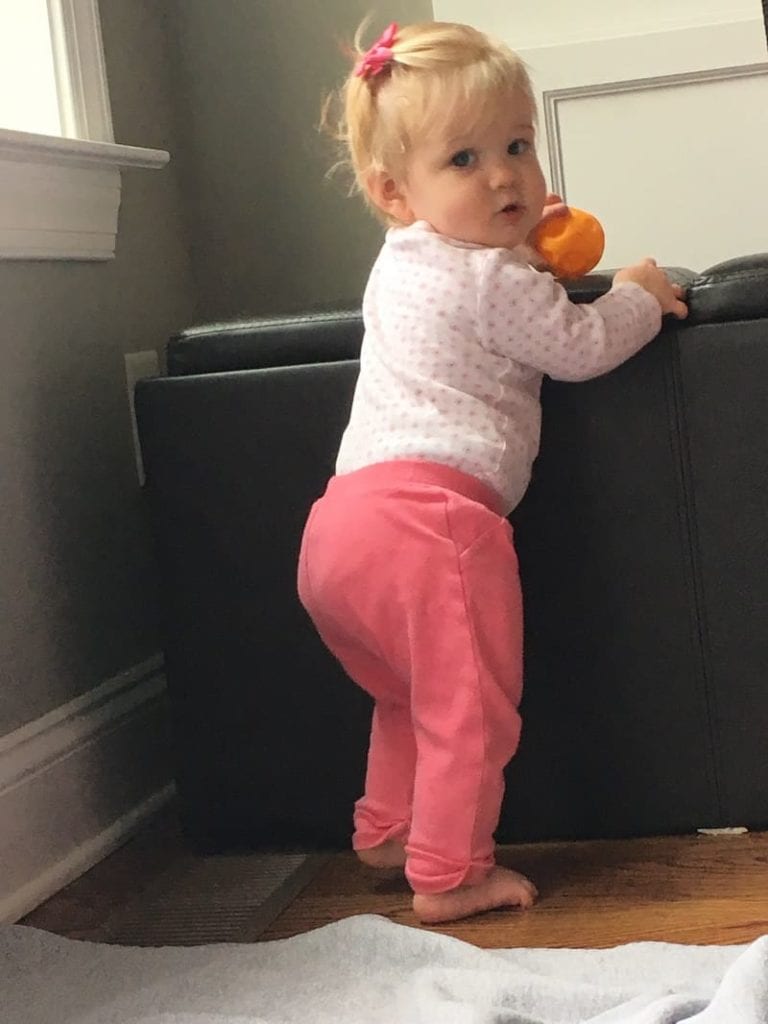 I’m happy to say she no longer hates car rides like she used to. She actually loves climbing in and out of her carseat. She also loves opening cabinets and drawers, and I have to watch her like a hawk.

I think I’ll be buying some of these soon. She seems to spot the tiniest things on the floor, and since she’s big into her pointer fingers, she will inspect it. It’s always a reminder to me to keep the floor clean! 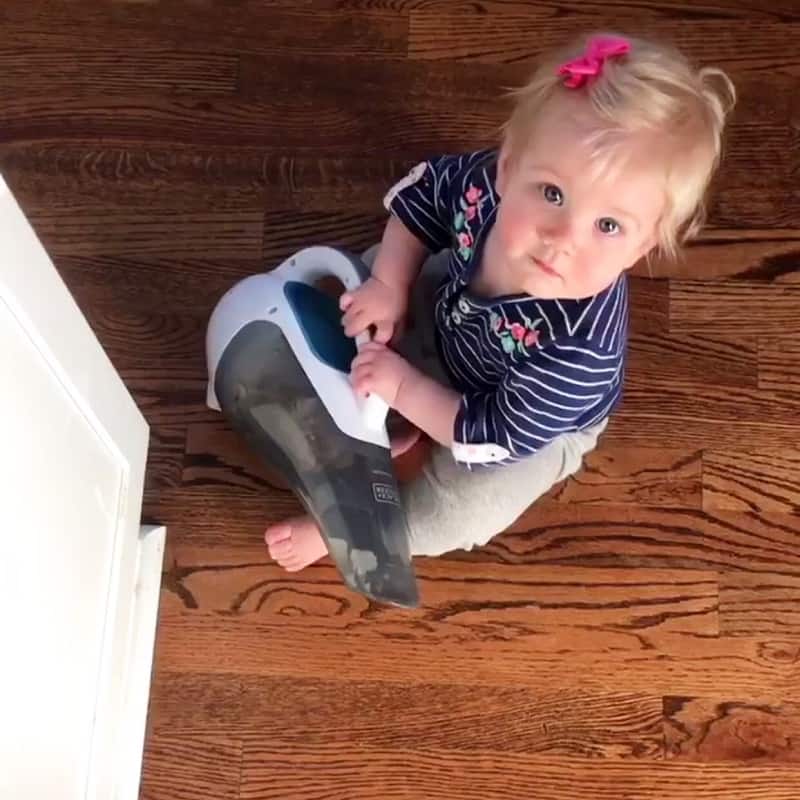 Camryn also loves climbing the stairs. We don’t have carpet on our stairs so we keep a baby gate at the bottom so she can’t do it if we’re not around her. She’s so quick too! She is so fascinated by Tater still, and tries to pet (read: pull her hair) her.

Now, she’ll even crawl over Tater to get where she wants to go. I love watching the two of them together, it really feels like they are siblings and each is protective of the other 🙂 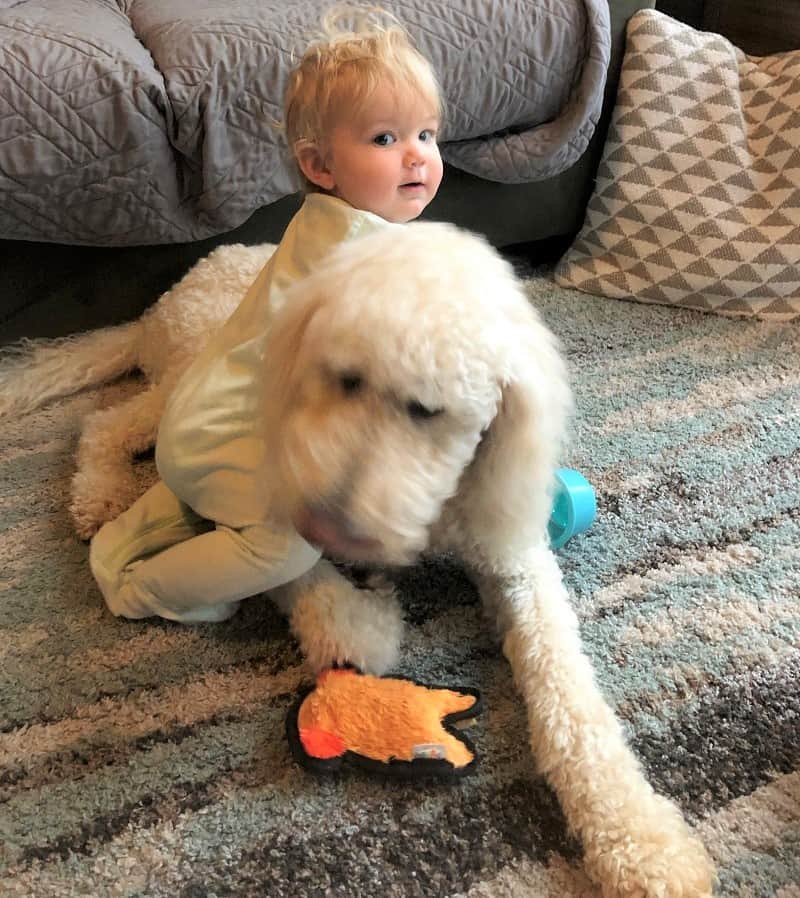 I think she also really enjoys being outside. She’ll want to go out on the deck whenever Tater goes out and she loves walks/runs in the stroller. We go to the neighborhood park often and swing on the swings.

She also loves WATER! Swim class and baths are her favorite. I hope it stays that way. 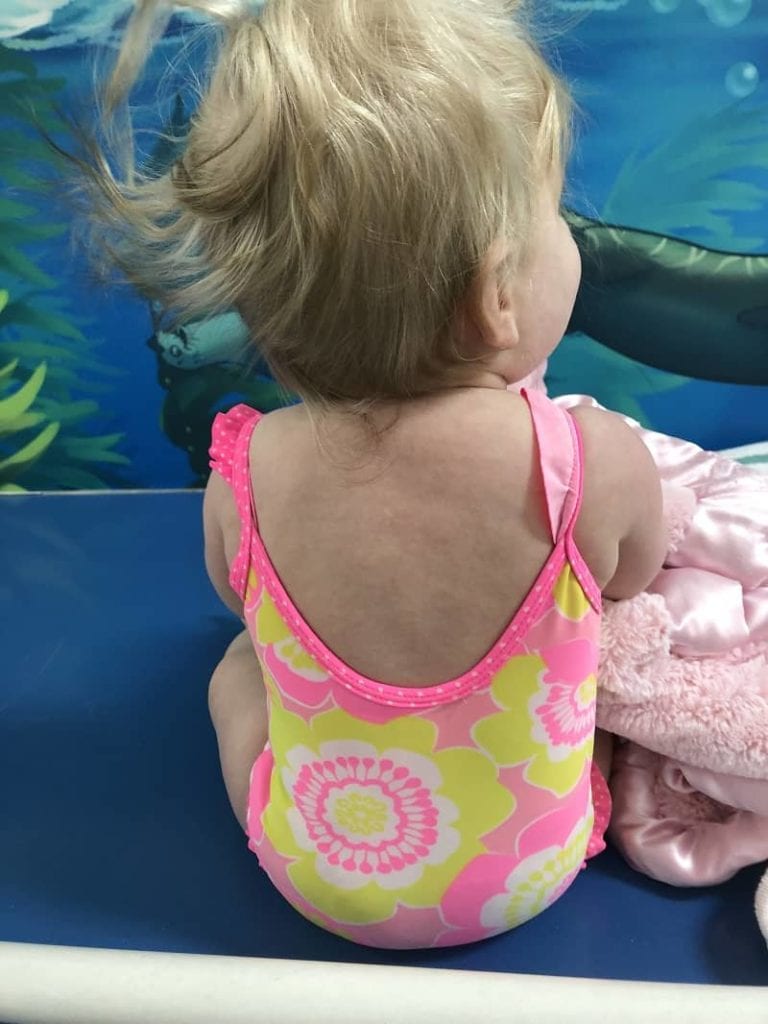 We started some more formal sleep training after the new year. While I love rocking her to sleep, it was just making naptimes really difficult (and short). I know people have mixed feelings about sleep training and I think each family has to do what’s best for them!

But, we were able to cut down all night feedings, and now she has two hour-plus naps, rather than the 2-3 35-minute cat naps she was taking. The wearable blanket and noisemaker I talked about remain key players in our nap and bed routine.

I used the Huckleberry App for some guidance on nap windows and it’s been SO helpful! While the app is free, you can pay $14.95/month for personalized sleep guidance based on your schedule.

I bought a one month subscription and felt like it was super helpful and it’s been smoother sailing since then.

It has been a complete game changer having her learn how to put herself to sleep for bedtime and naps. For future kids, I will start that process much earlier. We did it here and there with Camryn, but everyone is happier (and more well rested) now and that has been great.

I know we’ll have hiccups when traveling, regressions, teething, sicknesses come up, but we’ll navigate those as we need to!

Nursing is going well. I don’t even really think about it anymore, which is such a far cry from how it was in the beginning. Although nursing was a difficult transition for us at first, I have come to love it, even though now she kicks and grabs anything around.

I’m going to try to continue to nurse her as long as she wants to.

I hate pumping, but I’m still doing it at night before bed, and sometimes in the morning if Camryn only eats off one side. I’ve built up a pretty sufficient freezer stash, so once we do start the weaning process, we should be able to still give her breastmilk for a while.

That being said, I have no idea what weaning will look like. Any mamma readers weaned? How did you do it?

I’m thinking it will be a slow, gradual process. I envision once she starts eating more solid food, her milk intake will go down, and eventually maybe just nursing her at night and/or as needed for comfort. I’m A-okay with that if it works out that way. 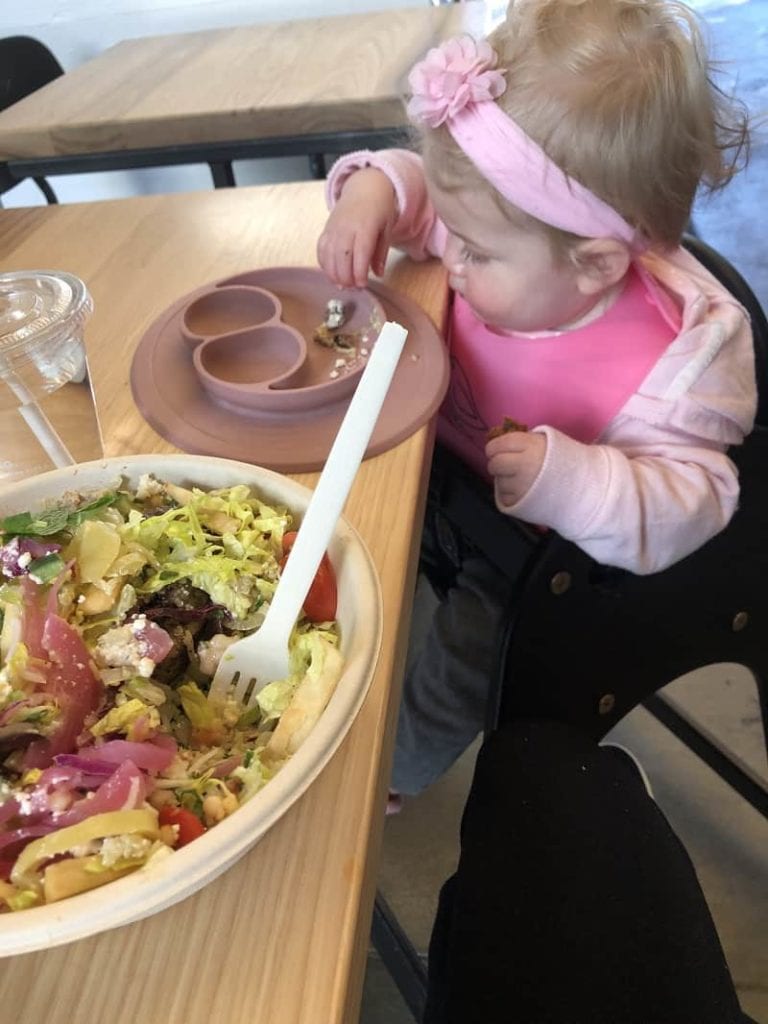 As for real food, I wouldn’t say she’s swallowing a ton, but she’s definitely interested and getting down a lot more than she was in the beginning! She continues to love asparagus, black beans, pineapple, and pasta.

She’ll eat anything, but now she’s at the point where she will purposefully start to feed Tater. Tater just waits under her highchair for any scraps to drop, but I feel like the two are in cahoots and Camryn is just waiting to feed Tater. Not sure I can continue to fight that one.

Some days, I truly feel that I’ve found my stride in motherhood. And other days, it’s so dang hard. I think that’s completely normal. 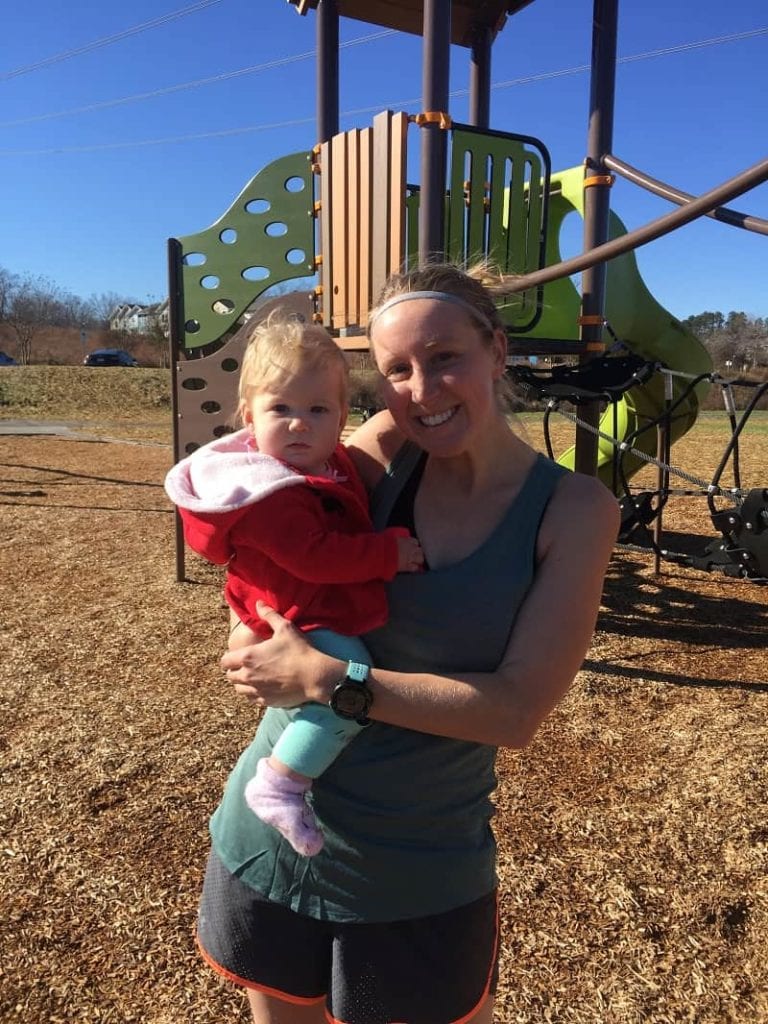 I went to a mom’s support group meeting a few weeks ago, run by my therapist. It was nice to relate to other moms. Some of them were in the throws of newborn life. I remember feeling the way they described feeling, when everything was so new and I hadn’t established any trust in myself as a mother yet.

I had no idea what I was doing. I was a hormonal mess, fragile and vulnerable. I wanted to just look at them and tell them it gets better, but instead, I chose to listen and empathize.

Because I truly remember having the same hard feelings they were experiencing.

I guess working plays into how I’m feeling. I’m currently happy with my work-life balance. I love having time to pour my education and passion into things, but also love having some quiet uninterrupted time with Camryn.

For example, Mondays are swim days, and sometimes we’ll go to lunch after or to the park. I know I’m very fortunate to have this flexibility, and I don’t take it for granted even for a second.

I don’t think I could be a full time stay-at-home mom though. I need some time to myself, to recharge, and “work.”

Overall, I’m still working on giving myself grace on those harder days. Sometimes I get stressed about not getting everything up on the blog that I want to – posts, recipes and the like.

But, I remind myself that this is a fleeting time of my life, and I realize that the people who want to read my blog will continue to read it. So, if you’re here today, thanks for reading!

I’m really enjoying getting back into running more regularly and I think that’s helping me feel more like “me” too. I’m even thinking about an upcoming half, and *possibly* a marathon in the fall. Don’t worry, I’ll keep you all updated when I make that decision. 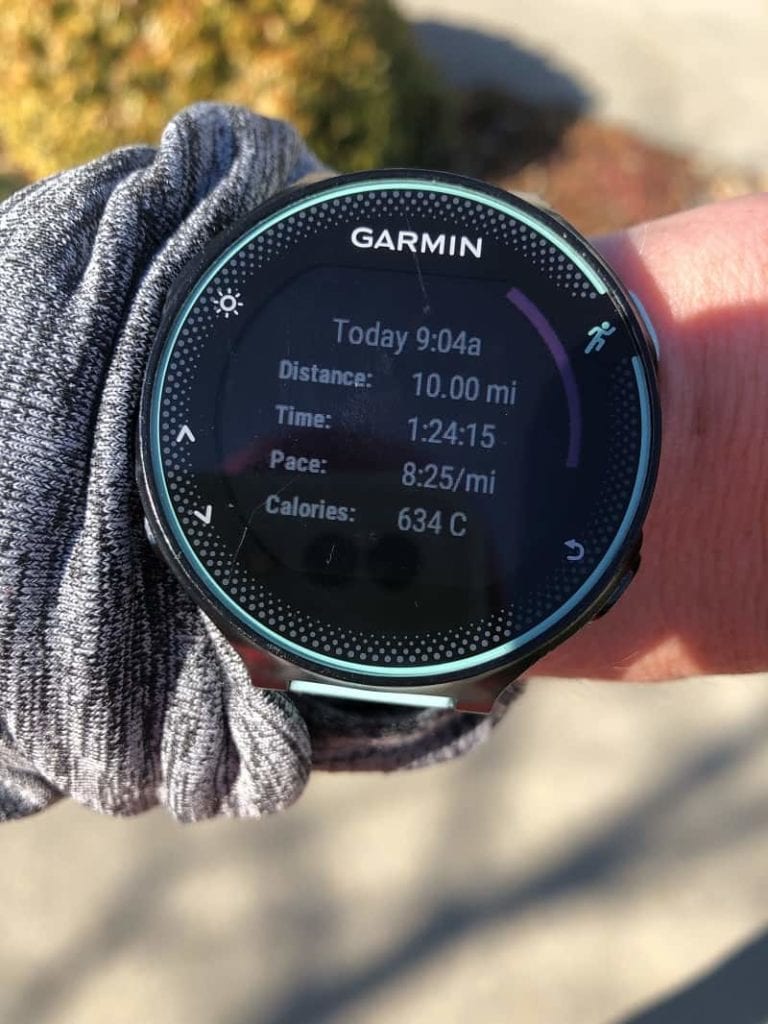 Okay, I think that’s it for now. Let me know if you have an specific questions and I can try to address the in a future post.

I’m starting to think about one year birthday party themes and ideas. Any ideas?

Any advice on weaning for nursing?

8 responses to “10 Month Update on Baby and Motherhood”