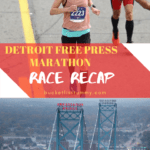 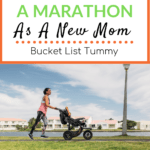 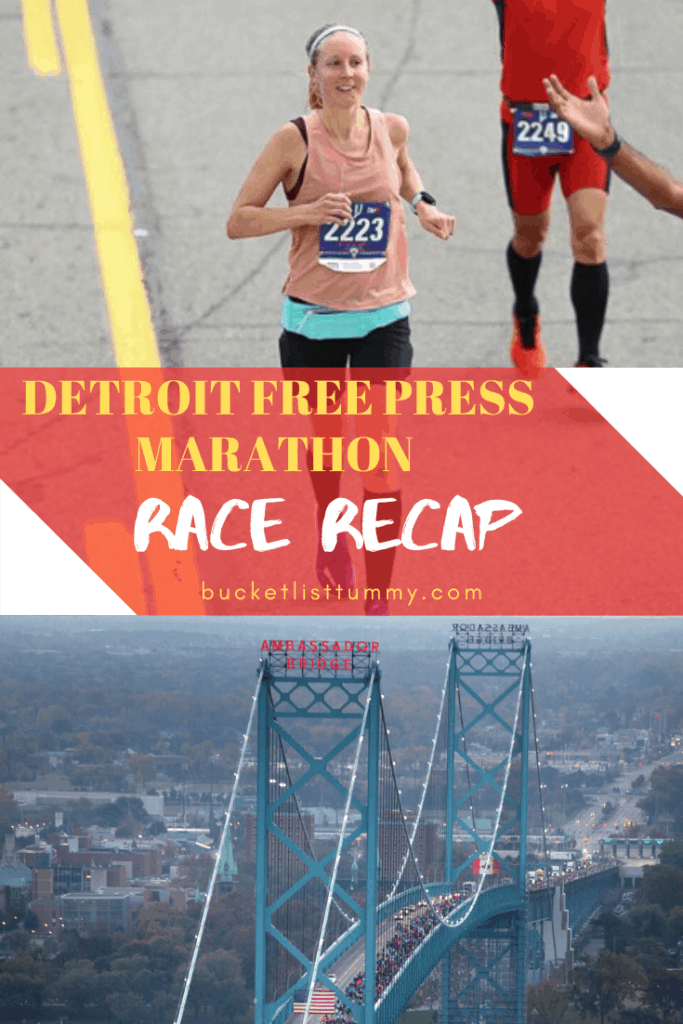 Here we are – Today, I’m sharing my race recap from the Detroit Free Press Marathon!

I started with this race recap soon after last Sunday’s race because I wanted it to be fresh in my mind. I’ve had plenty of time to reflect on the race so I wanted to share it all in this post.

In This Recap, I’ll discuss: This post is written in partnership with the Detroit Free Press Marathon. All thoughts and opinions are my own.

Since the marathon was on Sunday, the expo was on Friday and Saturday. This was a true weekend of events. I flew into Detroit around noon. The airport is actually not near the downtown area – it’s about a 30 minute ride. So, I hopped in the uber and headed to lunch before arriving at the TCF Center for the expo. Since I was running an international event, I did need to bring my passport to get my bib.

I meandered around for a bit, strongly considered buying some apparel (but talked myself out of it), and got some photos. Some really cool things about the expo: I was exhausted after the Expo from getting up early for a flight and walking around the expo so I went back to my hotel room and put my feet up and watched some netflix. While I wanted to explore a little more, that was just what I needed to regroup.

I went to a VIP dinner for runners on Friday night and had pizza and a beer, but only ended up drinking half the beer. I had long before decided that Friday was my early night to get a good night’s sleep since I would be up at 4am on Sunday.

Saturday morning, I slept till about 8, which was glorious. I almost wish I hadn’t set my alarm because I don’t know how long I would have slept! But, I did get up and ran a short, 15 minute shakeout run just to get the blood flowing.

I hadn’t done much training the week prior, and I wanted to get an easy run and stretch session in to avoid feeling too stiff on race day.

So, I ran to the Institute of Bagels and picked up a rosemary sea salt olive oil bagel with smoked salmon, egg and lemon zest cream cheese – it was an amazing combination. Once I wish I could have every Saturday morning! I ate it back in my room with some coffee and laid out my race day clothes for the next morning. I took a quick shower and then met my friend, Alyssa, downstairs to explore for the day.

I’m going to write a separate post about eating in Detroit because this one will be long enough.

I had pizza for my pre race dinner. People always ask what I eat the night before a race, and it’s usually some combination of chicken and sweet potatoes, or pizza. I had pizza before the Ogden Marathon and I felt great, so that sounded good. I was in bed by 9:30, but of course, it took me a while to fall asleep in thinking about the race. Obviously, I was full of excitement, nerves, anxiety!

Race day morning started bright and early at 4:30am, and I headed downstairs to get a coffee and oatmeal from starbucks. I followed my marathon nutrition plan exactly, and feel like it worked well for me. I brought my own peanut butter packets and grabbed a banana to add as well. For electrolytes, I also added Skratch to my water bottle and drank it with 16 ounces of water to help hydrate.

After eating, I stretched, and got back in bed and watched some tv until I left the hotel, around 6:20.

The race started at 7 and was a few minutes from the hotel, SO CONVENIENT. Though I had already peed like 16 times before leaving the hotel, I still found myself in the line for porta potties twice to pee a little bit more.

I lined up in corral D for the 7am start. The Detroit half marathon and full marathon began at the same time (7am). Somehow, Ed got this picture from the start (I think through tracking me on the app)!

We got lucky with the weather. It was 58 degrees at the start and stayed pretty cool throughout the race.

I will say with the weather and excitement I went out with a bang. Ed and I had crafted my race plan, and we had agreed for me to start 9:15ish pace for the beginning miles, and then pick it up after the Canadian part. But, I was a little ahead of the game. The beginning of the race took us through some of Detroit’s downtown and then we started making our way towards Canada. Mile 2 was a slow incline up the Ambassador Bridge, and by mile 3, we were crossing the bridge into Canada as the sun was rising.

This photo is from the Free Press team! This was seriously SO COOL!

There were border patrol agents for safety and I was cherishing the opportunity that I was in two countries at once (and running a race in 2 places at once – so cool).

Miles 4-7 were in Windsor Canada, mostly along the Detroit River which was absolutely beautiful. I still felt good and at this point, was averaging 8:40 pace.

I took my first gel around 4 miles, and then about every 4-5 miles on pace after. The Canadians were great cheerleaders as well, and I felt pretty amped throughout that whole section of the race. I also enjoyed running through some cute parts of a neighborhood and seeing people just outside cheering us on. Mile 7, we took the Detroit-Windsor Tunnel back to the US.

This was probably my least favorite part because it was a bland, warm tunnel, but the cool part about it was that we “technically” ran a mile underwater. In fact, it is the only official international underwater mile in the world, since the tunnel runs deep beneath the Detroit River.

I’m glad the tunnel was early when I was still feeling good, rather than later in the race!

Upon exiting the tunnel (just a bit of a slight incline there), we were back running along the Michigan side of the river. I was still feeling really good at this point, and averaging an 8:20ish pace. Though I wish I could have told myself to slow down just a little bit.

I don’t remember many parts of the course here, but I do remember coming back to the downtown area for the halfway mark on Michigan Avenue. This is where the international half participants finished, though we kept going. There was good crowd support here! We then headed out of the city into some really nice, historic neighborhoods, which was really pretty.

Shortly after this, we came to the Lululemon team, which were VERY enthusiastic with cheering. I remember feeling pretty amped after running by them as well. I was still feeling very strong at this point and consistently running 7:45-8:00 minute miles. It was very serene running around it, which actually made it difficult this late into the race because I was starting to feel like I needed more crowd support. Instead, I relied on my music, but my mind was just ready to be done running at this point.

I’m pretty sure this race photo captures my emotions well during this portion of the marathon. My lower back, soles of my feet, and legs were all really starting to hurt tremendously and I felt like I still had so long to go.

After crossing the bridge back towards the city, I felt a little mental rejuvenation come back, but I was still struggling and I wasn’t sure how I was going to manage 3 more miles. The next few miles were really pretty, though, as we were running on the Detroit RiverWalk.

I just wish I could have enjoyed it more. I was focusing on each minute at a time, and my pace had slowed to 9:20ish/mile by this point. At this point, I was doing everything in my power not to stop and walk. Around mile 23, I took a caffeinated gel to help fuel me through the remainder of the race- no idea if it helped or not!

I remember turning the corner in mile 26 with .2 miles to go, which seemed like the longest quarter mile of my life. I could see the finish line in the distance!

In my past marathons, I usually save a little “kick” for the finish line but I didn’t have anything left in me, so I just kept going until I crossed that line.  I was so proud of this marathon finish. I’ve never been so relieved to see a marathon finish line or be done with a race. And the family had all been cheering for me which was so fun to read after. I could barely walk and just wanted to be back in my hotel room in a warm bath. They gave me my medal and I picked up a chocolate milk for recovery and started my slow walk back. I sat down for a brief minute to stretch and had the hardest time getting back up. I remember seeing people whizzing by me and wondering how the heck they were able to move so quickly after such a grueling race!

Truthfully, I walked at a snail’s pace back to the hotel to stretch, shower and eat. I then spent the rest of the afternoon relaxing, packing up and got to the airport early where I enjoyed a burger and fries (my favorite post run food). What Worked and Didn’t Work For Me

I think I had a few things working for me for this race.

Here’s where I think I fell short during training:

Those are my main reflections, in thinking back to my first marathon (Savannah marathon) and second marathon (my Boston qualifier).

It was really fun to check this race off my bucket list and run a race that spanned two countries. I don’t think many people can say that.

However, I won’t count this as an international marathon though, so doing a full in another country is still on my list! Would I do it again? Maybe, though I’m not someone who typically runs the same race twice. But, with so many options, perhaps the international or even domestic half would be in the cards for the future.

I also think it would be fun for Camryn to do the kid’s fun run someday – we’ll see!

Have you ever run the Free Press Marathon?

Sarah Schlichter is a Registered Dietitian with a Master’s in Public Health Nutrition. She specializes in sports nutrition and intuitive eating, and recipe development. She also co-hosts the podcast, Nail Your Nutrition.
18 Comments
Join The Conversation