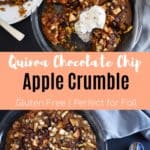 This Gluten-Free Apple Crisp recipe uses a blend of quinoa, oats and almond flour to create a crumbly, healthy almond flour crumble. It’s perfect for fall and great by itself, with additional fruit, or melted ice cream on top!

It’s September – you know that means all things pumpkin and apple, like pumpkin apple baked oats. While the weather is still warm, fall is in the air and in our minds.

So perhaps this healthy apple crisp is something you can add to your repertoire. It’s perfect for fall and using up those fresh apples.

We eat apples year round, like in these apple cinnamon overnight oats.

Similarly, this healthy almond flour crumble recipe is a great treat year round, whether you have picked apples or not.

And if you want another Thanksgiving/fall inspired dessert, try this instant pot sweet potato casserole!

Nonetheless, my fall spontaneity led me to create this gluten free apple crumble as a low sugar apple crisp recipe, which is still all kinds of delicious.

Plus, there aren’t many healthy apple crisp recipes that use quinoa, and the quinoa crisp part is the unique, fun part! And the maple syrup is one of my favorite fall additions – it’s hearty and not too sweet, but just right.

I call this a mix between a crisp and crumble, it’s a bit of both. I’ve never made a quinoa crisp before, but it turned out well, with the addition of almond flour for the crumble like.

When serving, you can even add a non dairy ice cream if you’d like.

Here’s what you need for this gluten free apple crisp recipe.

Whether you’re gluten free or not, this almond flour crumble topping is irresitable.

This healthy apple crumble recipe is perfect for any time of year, especially with a cold scoop of ice cream! If you omit the ice cream, it’s a gluten free dairy free apple crisp that everyone will love.

But now that I’ve brought up holidays, let’s talk about them! When it comes to favorite holiday desserts, I go back and forth between apple pie and pumpkin pie.

Ultimately, apple pie wins over for me. It’s just an American classic, isn’t it? Plus, there are so many varieties of apples to pick so I feel like there are more choices..maybe?

When I go apple picking, I am swooning with the possibilities of what to make, and now you have a winner with this quinoa apple crisp.

Made with oats, almond flour and quinoa, it’s gluten free and an easy iteration of a paleo apple crisp. Speaking of, I get all of these pantry essentials (almond flour, quinoa, coconut oil, etc.) in bulk from Thrive Market. It’s such a better deal!

I’m all about easy, 30 minute recipes, which you probably know. You can make something taste great and not spend a ton of time on it.

Mix all of your main ingredients for this dairy free apple crisp in a mixing bowl, except part of the apple and oats, which you will use for the topping. Now you can leave out the chocolate chips, but who are we really kidding if you don’t add chocolate chips?

Then, you’ll pour the batter in a cast skillet or pie bowl and toss it in the oven for 45-50 minutes and enjoy the cinnamony, droolworthy smells coming out of your kitchen.

Since mine was a little too big, the pie was very thin. However, if you have a skillet close to 9-10 inches, it would be perfect!

The Best Apples To Use

I prefer red apples, but if you like a tart taste, granny smith would work too. As a matter of fact, Bon Appetit says Granny Smith apples are the best for baking!

Personally, I love pink lady apples every which way and also bake alot with Braeburn apples.

Honeycrisp apples just seem too expensive to bake with. I’d rather just bite right into them, but you do you!

I feel like this healthy almond flour crumble recipe borders on both a crisp and crumble. The outside is crispy and the inside is crumbly, so I’ve named it interchangeably.

When first testing this quinoa apple crisp recipe, I knew I wanted something crumbly, having been wildly obsessed with apple crumble recipes every fall.

While most recipes use regular or whole wheat flour, I made this apple crumble with almond flour to keep it gluten free. I didn’t aim to create a paleo apple crisp but here we are. You can use any flour you desire!

When the opportunity arose to create a healthy fall dessert, my mind went right to a combination of apple crisp, apple pie and apple crumble.

It’s not as solid and stout as your typical apple pie, but there’s more cake to it than your typical crumble. So…err…it’s kinda in the middle of a cake, pie, and crumble.

The quinoa crisp is what gives it the apple crisp taste, which is the bottom line of why you’re here I’m sure.

Why You Need This Healthy Apple Crisp

Unlike your typical store bought pie, there are no refined grains or sugars in this pie.

The sweetness comes from maple syrup, which bonus, even has small amounts of calcium, iron, zinc and magnesium.

And, there is an abundance of fiber from whole grains.

So, there you have it. You can eat a slice of it like pie, or crumble some of it over your yogurt, whip cream or ice cream. Or, you can eat it like cake and throw a scoop of ice cream on there.

If you’re looking for a vegan apple crisp recipe, you could try substituting a flax egg for the egg but I haven’t tested it. You’ll also want to find a good non-dairy ice cream option!

And, when I say chocolate chips are optional, are they really ever optional?

Enjoy Life does make vegan chocolate chips though. It is also a delicious homemade apple dessert recipe when you add a scoop of ice cream!

This Gluten-Free Apple Crisp recipe uses a blend of quinoa and oats to create a crumbly, healthy apple crisp recipe. This apple crisp is perfect for fall and great by itself, with additional fruit, or melted ice cream on top!

As an Amazon Associate and member of other affiliate programs, I earn from qualifying purchases.

Did you make this recipe?

Tag @BucketListTummy on social media and Rate the Recipe

Sarah Schlichter is a Registered Dietitian with a Master’s in Public Health Nutrition. She specializes in sports nutrition and intuitive eating, and recipe development. She also co-hosts the podcast, Nail Your Nutrition.
22 Comments
Join The Conversation